SYDNEY -- Hundreds of Australian passengers on Monday were greeted at Auckland Airport with welcome signs and live music, as New Zealand opened its doors to quarantine-free travel from its bigger neighbor for the first time since COVID-19 brought the world to a standstill in March 2020.

Hundreds of masked passengers thronged the international departure terminals at Australian airports while some emotional travelers shared photos on Twitter as they prepared to meet loved ones. For the countries' governments and travel-related businesses, the opening marks a crucial step toward recovery -- though there is still a long way to go.

"The opening of the two-way bubble is fantastic for the family and friends who are reuniting after so long apart and for the many jobs which are so heavily dependent on tourism," Qantas chief executive Alan Joyce told reporters at Sydney Airport.

Almost 5,000 people were expected to be on the 30 flights Air New Zealand is running across the Tasman Sea on Monday alone. A similar number were traveling on Qantas and subsidiary Jetstar's 29 flights on the first day following the New Zealand government's lifting of quarantine restrictions for Australian travelers.

Passengers arriving in Auckland were met with "Welcome Whanau" signs -- the Maori term for family -- and a choir provided a score for emotional reunions. In Australia, travelers flying into Melbourne from New Zealand were treated to an interpretive dance show. 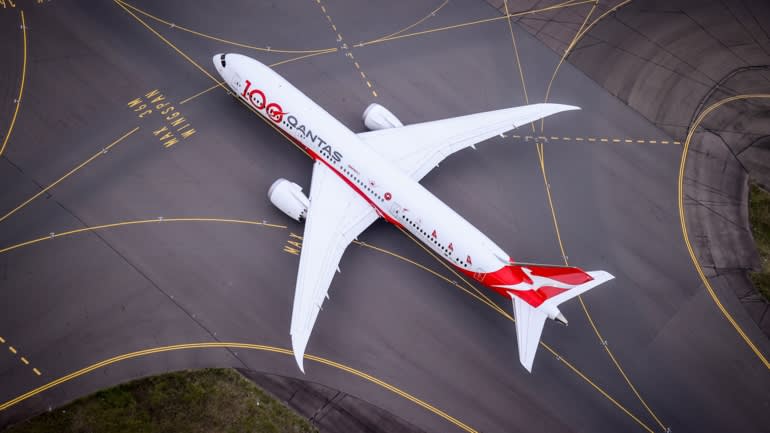 The head of Australia's Qantas said the bubble is "fantastic for the family and friends who are reuniting after so long apart and for the many jobs which are so heavily dependent on tourism."   © Reuters

Australia and New Zealand have been the envy of the world as they have curbed infections and largely reopened their economies to offer citizens some semblance of normalcy. But they have kept their borders closed to the rest of the world, in principle only allowing citizens and permanent residents to enter following a 14-day mandatory quarantine in a hotel.

Australia had in October opened a one-way travel bubble with New Zealand, but flyers from Australia to the smaller island nation of 5 million people were still required to isolate for two weeks. New Zealand Prime Minister Jacinda Ardern earlier this month said the new arrangement was a "world-first of sorts" that would help the neighbors' post-pandemic recovery.

"This is an important step forward in our COVID response and represents an arrangement I do not believe we have seen in any other part of the world," Ardern said from New Zealand's parliament in Wellington.

"That is, safely opening up international travel to another country while continuing to pursue a strategy of elimination and a commitment to keeping the virus out."

Australia's deputy prime minister on Monday said his country is in talks with Singapore about a similar quarantine-free travel arrangement.

Under the deal with New Zealand, passengers from Australia take "green zone flights" for those who have been in Australia for the previous 14 days. These flights are crewed only by members who have not been on high-risk routes for a set period of time.

The travelers are required to complete a health declaration ahead of departure and return a negative test in the 14-day period. Passengers have been warned that quarantine-free travel could be suspended at any time in case of COVID-19 outbreaks.

The bubble provides a new lease on life to airlines and airports.

Auckland Airport expects a tenfold jump in flights between Auckland and Australia over the first few weeks, with flight numbers set to scale up to 400 a week.

"A lot of people on those first flights will probably be Kiwis coming home to see family and I think a lot of those people had been desperate to come back, so we'll have a few little Kiwi touches to acknowledge that," airport chief executive Adrian Littlewood told Radio New Zealand.

The resumption of travel between the neighbors also benefits tourism, though travel agents in Australia said it may not be a big boost to business while borders to the rest of the world remain shut.

According to Tourism NZ, Australian visitors contribute 2.7 billion New Zealand dollars ($1.9 billion) to the national economy in an ordinary year. That figure is expected to touch NZ$1 billion this financial year if the travel bubble operates smoothly.

Tourism operators urged governments on both sides of the Tasman Sea to ensure that the bubble stays open, which would help bolster consumer confidence in booking travel.

It would also help travel agents who are yet to gather an outstanding 4 billion Australian dollars ($3 billion) still owed to Australians by airlines, hotels and tour operators for COVID-impacted travel overall, including managing re-bookings and cancellations as a result of on-and-off restrictions.

"It's not a massive increase in business and our sector still desperately needs support, but it is a much needed step in the right direction," said Tom Manwaring, chairman of the Australian Federation of Travel Agents.

Australia, with its population of over 25 million, has kept COVID-19 cases since March 2020 below 30,000, while New Zealand has recorded a total of just 2,600 infections.