SYDNEY -- Australia's spreading pilot programs to let travelers quarantine in the privacy of their own homes are drawing criticism from some quarters for invading that privacy.

Across Asia and elsewhere, countries have deployed various technologies to help fight COVID-19, from contact tracing apps to QR-code check-ins for entering establishments. But some see Australian authorities' use of facial recognition and geolocation to enforce home quarantines as a step down a slippery slope, even as efforts to reopen borders come as a relief.

The issue is casting a spotlight on what levels of surveillance our societies, especially liberal democracies, are willing to accept in the name of health and safety.

"It's time to give Australians their lives back," Morrison said.

Through the pandemic, Australia has imposed some of the world's toughest border rules, not only barring foreign arrivals but limiting the number of citizens who can come back, while curbing departures. Those who could return have been forced to stay in hotel quarantine for 14 days, shelling out thousands of dollars. The policies helped Australia weather most of the crisis with only small outbreaks, though it is fighting its worst infection wave yet, with a seven-day average climbing toward 2,000 daily cases.

The easing announcement came a couple of weeks after the state of New South Wales -- home to Sydney and the nation's economic heart -- committed to joining home quarantine trials, promising strict enforcement.

Fully vaccinated participants in the state's pilot are selected by NSW Health, based on a risk assessment, and may include some state residents, some non-Australia residents and some Qantas aircrew. The home isolation period is only seven days.

Similar to a recent trial program primarily for interstate travelers in South Australia, NSW participants were to be closely observed by a smartphone app using facial recognition software and geolocation technology to ensure they really are isolated, coupled with "random in-person" police checks.

"The pilot program is being run in partnership with the Commonwealth Government and findings will inform future quarantine programs," an official statement said, suggesting such systems could become the norm.

That does not sit well with Toby Walsh, laureate fellow and Scientia Professor of Artificial Intelligence at the University of New South Wales. He echoed critiques in Western media outlets that likened Australia's home quarantine mechanisms to George Orwell's dystopian novel "1984."

"I'm rarely in agreement with organizations like Fox News and Breitbart, but with this home quarantine app, and the claims that this is Orwellian as it gets, I do find myself tending to agree," he told Australian public broadcaster ABC.

Speaking with Nikkei Asia, Walsh warned against rushing to use facial recognition, in particular.

"I think it's especially dangerous with technologies that involve face recognition. We should be very cautious about how face recognition gets normalized and rolled out into our lives. There are much simpler, better, technologies to do this. ... Fingerprints are accepted in law as being a pretty unique identifier, whereas our faces aren't, and there are plentiful examples of facial recognition software going wrong, being racist and sexist." 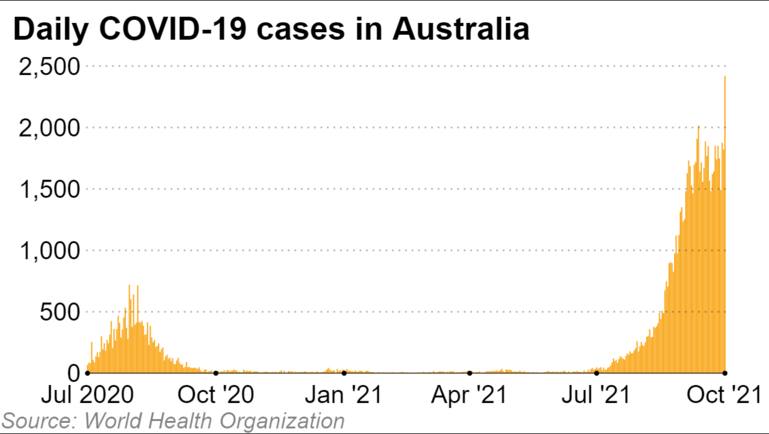 Facial recognition has long been controversial. In the U.S., the city of San Francisco made headlines in 2019 by banning its use by local agencies, including law enforcement. China is known for its enthusiastic embrace of the technology and has drawn international criticism for reportedly using it to monitor the Uyghur population in Xinjiang.

But such systems are increasingly entering the mainstream for border control, policing and other purposes. Nor is Australia alone in using some kind of tracking to enforce home quarantine. Japan, for example, insists returning travelers download an app to report their location and health status, and says they should be prepared to answer random video calls.

When South Australia's use of facial recognition prompted questions, the state's premier, Steven Marshall, offered assurances that the data would not be used for anything else. "We just use it to verify that people are where they said they were going to be during the home-based quarantine," he was quoted as saying by ABC.

Walsh is skeptical. "Even if you accept the premise that we need to home quarantine people, I think [the use of facial recognition is] a classic example of politicians reaching for some fancy new technology, which isn't going to solve the problem that they're hoping it's going to solve."

"We would be concerned greatly at how facial recognition information is shared amongst other government departments, how it's stored, how easily it's hacked, a number of issues about how the information is dealt with and how it's also used for other purposes," said Michelle Falstein, secretary of the council's executive. "So those sorts of things are really not covered off under legislation in this country at the moment."

Falstein cautioned that once something like this takes hold, "it's quite hard to unwind." Facial recognition software is shown at an event in Beijing: The use of such technology is spreading despite privacy concerns.   © Reuters

"They don't have any incentive to go to get rid of it, and they have a great incentive to keep it. And then you can always say, well, we used it for this purpose or that purpose, and nothing happened," she said.

"And, of course, facial recognition is a greater risk to people's identities being taken and their information being used for purposes that they don't expect that they will be."

Falstein would not go so far as to call Australia's trials Orwellian, as she said facial recognition "could be a useful tool if managed properly." But she said the NSWCCL had yet to determine the extent of data oversight. "When I looked at the privacy policy that the South Australian government had around their trial, there was certainly no independent oversight."

Some question whether home quarantine will be necessary for much longer, if at all, as Australia's vaccination rate rapidly rises. Over 45% of Australians have been inoculated with two doses, according to Our World in Data, with the country on track to catch the U.S. rate.

"Once everyone's vaccinated, double vaccinated, you have to wonder, if you've reached 80% or 90% vaccination rates in this country, why do you need quarantine anymore? You don't need the home quarantine," Falstein said. "So this really should be a temporary measure."