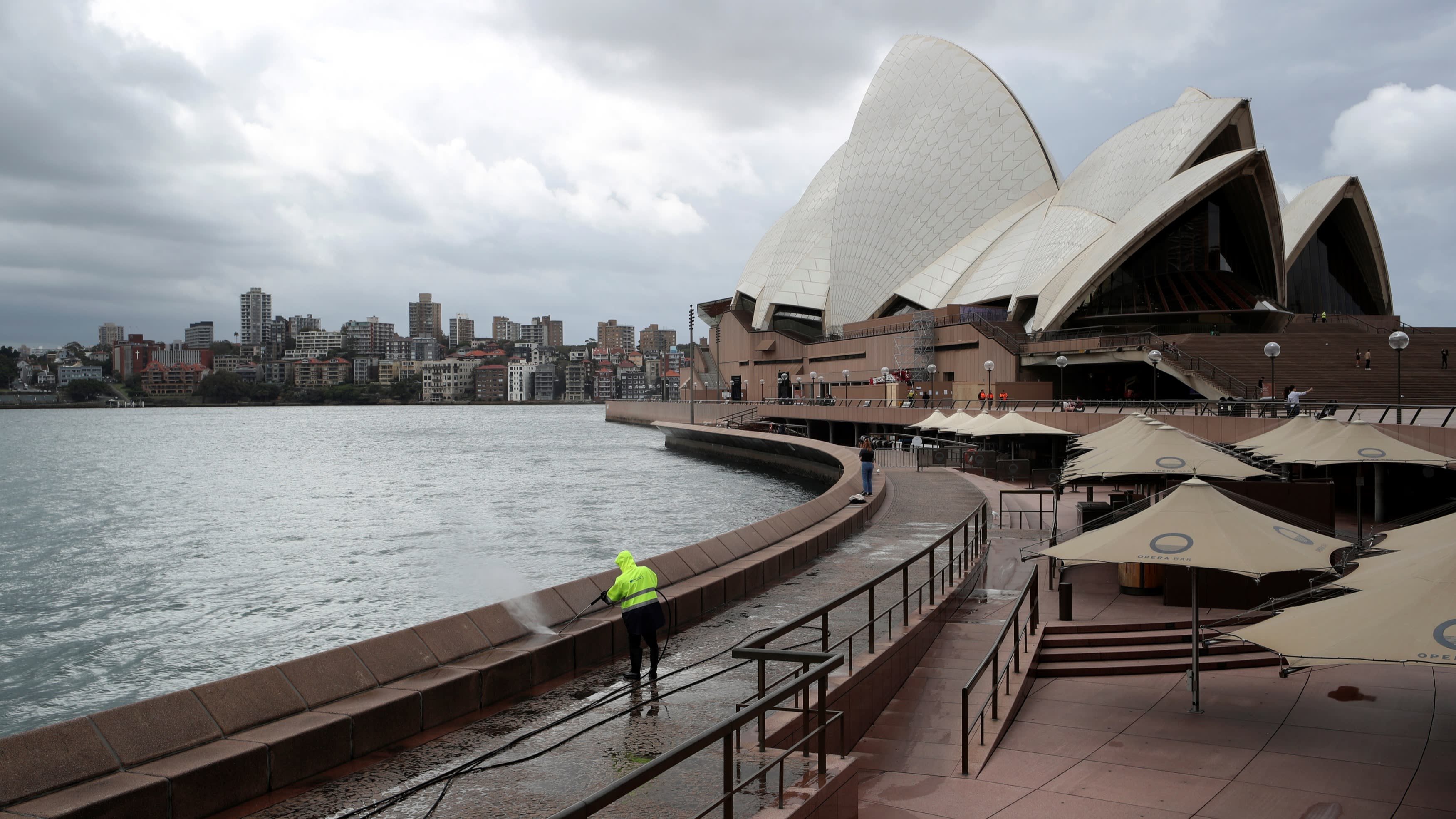 A worker cleans the waterfront area of the Sydney Opera House, in the wake of New South Wales implementing measures shutting down non-essential businesses and moving toward harsh penalties to enforce self-isolation as the spread of coronavirus disease reached what the state's premier calls a "critical stage" in Australia, March 26.   © Reuters
March 29, 2020 13:43 JST | Australia
CopyCopied

MELBOURNE (Reuters) -- The rate of spread of the novel coronavirus in Australia has halved in recent days, Prime Minister Scott Morrison said on Sunday as he announced an additional A$1.1 billion ($680 million) to expand telemedicine care and other health services.

The daily increase in cases in recent days was at about 13%-15%, down from 25%-30% seen a week ago, showing social distancing measures were working, Morrison said.

"These are still strong rates of increase, no doubt about that," Morrison said in televised remarks.

There were 3,809 confirmed cases in Australia early on Sunday, 431 more than in the previous day, according to health ministry. Sixteen deaths were attributable to the virus, health officials said.

Neighbouring New Zealand saw its first death related to the coronavirus on Sunday, with cases rising to 514 confirmed infections.

Two-thirds of the cases in Australia have been traced to contact with people returning from overseas, government officials said.

State leaders, however, are worried about the recent rise in community transmission, especially in the most populous New South Wales (NSW) and Victoria, where more than half of Australia's 25.5 million people live.

Australia has introduced a series of measures to combat the spread of Covid-19, but state and federal governments have sent some mixed messages about social distancing and other containment measures, leading to widespread confusion.

Morrison said on Sunday that all of Australia's six states and two territories were working to keep actions consistent, but rising case numbers may require individual states to take additional actions "sooner than other states".

Australian media reported on Sunday a number of fines were given to people for breaching quarantines after states moved last week to implement ad hoc fines and even jail terms for individuals and businesses not complying with the rules.

The spending comes atop earlier announced measures, which equalled to about 10% of Australia's annual gross domestic product, to help the economy weather the turmoil caused by the pandemic, which started in China and has spread ot over 200 countries.

A recession in Australia would be the country's first in nearly three decades. Morrison said more financial aid will be considered at the government's meeting later on Sunday.

"This is part of the hibernation strategy of ensuring we keep people connected with their businesses and with their jobs, so on the other side of this, Australia can bounce back stronger," he said.