Hugs and tears of joy as loved ones reunite, but travel restart just beginning SYDNEY -- Bear hugs, shrieks and tears of joy set the scene at Sydney Airport early on Monday, as the first wave of COVID-free Australian citizens and permanent residents returned home without needing to quarantine, following the easing of tight international border restrictions.

The gradual reopening of one of the world's most closed-off countries brings fresh hope for the travel industry, though certain Australian states are being more cautious and a full-fledged tourism restart will take time.

Still, after maintaining tight curbs since March 2020, and restricting even citizens from returning or traveling abroad without an exemption, Monday's easing came as a relief to many. The first arrivals flew in on a flight from Singapore that landed around 6 a.m., local time, followed by a flight from Los Angeles.

Monday "will be remembered as the day Australian tourism began the long march back to recovery in parts of Australia, as exemption and quarantine-free international flights resume and restriction-free travel reopens in [New South Wales] and Victoria for vaccinated travelers," said Margy Osmond, chief executive of Australia's Tourism and Transport Forum (TTF), on reopening day.

The returning passengers had to be vaccinated with two doses of a recognized shot and test negative for COVID before departure and again upon arrival. Meeting these criteria would allow them to skip the mandatory 14-day isolation period previously in force.

As for the tentative restart of international tourism, vaccinated New Zealanders are also allowed in starting Monday, while Singaporean citizens should be able to travel to Australia without quarantine starting Nov. 21.

The returnees may be coming home to a different Australia, particularly major capitals such as Sydney and Melbourne, where once-thriving entertainment and hospitality venues that have struggled with a lack of patrons now also face a shortage of workers to meet an expected pickup in business.

Recent research compiled for the TTF found that a quarter of businesses from tourism and related sectors said they had insufficient staff to meet pent-up demand, as travel restrictions have kept out both tourists and the working-holiday backpackers and foreign students who often serve them. It found that one in three businesses let staff go during the pandemic and now cannot not fill vacant positions.

"The lack of working holidaymakers, students and skilled visa holders is largely responsible for the worsening skills gap, along with the tens of thousands of tourism workers lost to the industry forever during the pandemic," Osmond said.

But the TTF welcomed the new rules for vaccinated travelers and the lifting of outbound restrictions as a boon for the battered industry.

"Today is a day for celebration, as fully vaccinated Australians can again consider exemption-free travel to faraway destinations like London and Los Angeles, and those in NSW and Victoria can also travel freely within their own states," Osmond added. 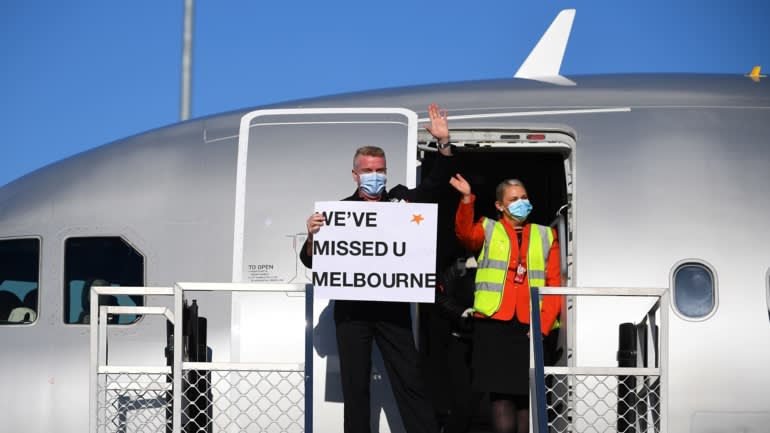 A flight from Sydney, in New South Wales, arrives in Melbourne, in the state of Victoria, on Nov. 1 as interstate travel rules are also eased.   © Reuters

TTF said the decision by the government of New South Wales -- home to Sydney -- to officially ease quarantine arrangements for the fully immunized was a major sign that the state was moving forward from the pandemic. The same is true for interstate travel as well.

"Travelers heading across the NSW and Victorian border will no longer have to quarantine for 14 days," said Osmond. The changes mean anyone currently in hotel quarantine who is fully vaccinated can leave today."

Rules still vary by state. The island state of Tasmania said it will allow entry to any visitor who has tested negative within 72 hours of departure. Others are slower to drop their guard: South Australia, Western Australia and Queensland will continue to require arrivals to quarantine for 14 days.

While the tourism sector struggles to find its feet, commercial life is slowly returning to Sydney, Australia's biggest city in terms of population and economic weight.

A useful indicator from Transport for NSW, the state's transport authority, issued Monday notes that around 500,000 Sydneysiders had gone back to using public transport in the first two weeks after the delta variant lockdown ended on Oct. 8, resuming their journeys at a rate three times faster than after the 2020 shutdown.

Ridership has increased by close to 200% since the depths of the lockdown in July, according to Transport for NSW, with an average of 825,000 trips taken each day last week as schools reopened and work-from-home employees began trickling back into offices.