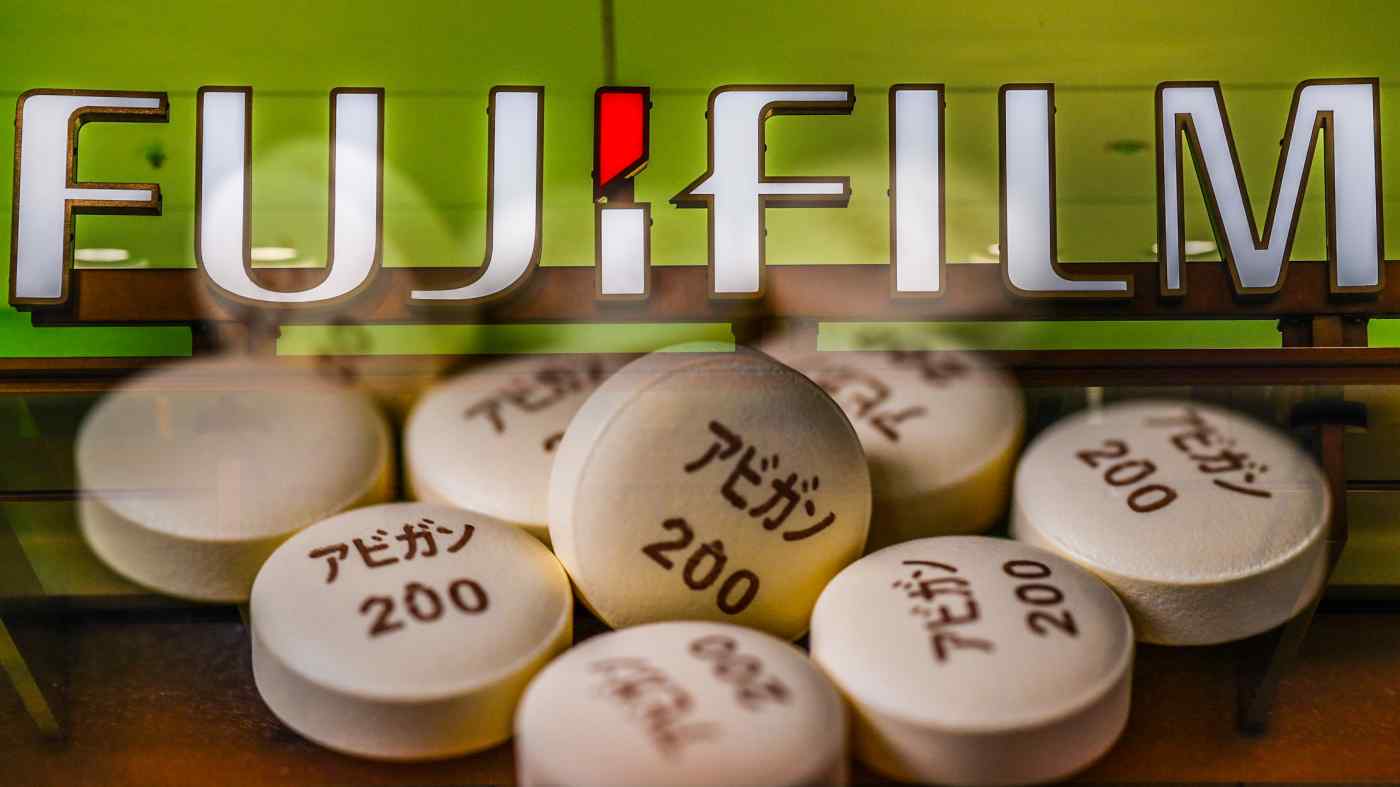 TOKYO -- Fujifilm Holdings has warned the Japanese government that a research arm of the Chinese military may claim intellectual property rights over the anti-flu drug Avigan as a COVID-19 treatment.

The move signals the Japanese company's concern over growing Chinese clout in the medical supply chain as the world continues to grapple with the pandemic. Losing the patent could also be another blow for Fujifilm's global ambitions for the drug, as the company tries to transform itself into a powerful health care player.

Patent filings in China show that a division of the Academy of Military Medical Sciences, a Chinese military-backed research arm, was granted a patent for "use of favipiravir for the treatment of coronavirus infections." AMMS filed an initial application on Jan. 21, 2020 and resubmitted it in June that year. The patent passed screening on March 29, 2021 and was published after that on May 4.

Fujifilm subsidiary Toyama Chemical developed favipiravir, the chemical compound behind Avigan, in 1998. Companies and research institutions can obtain a patent for new applications of the drug.

Patent lawyers said the early application -- Jan. 21 was barely a week after the first COVID-19 case was discovered outside China -- gives it an advantage in securing patents outside China. Using the Patent Cooperation Treaty, companies and research institutions can use the original patent date to file for patent protection in 153 countries. It is unclear whether AMMS has actually used this standard due to nondisclosure rules.

The approval in China was unusually fast. In 2019, it took an average of 22.5 months for a patent application to be approved in China. The quick approval is "an indicator that the patent was considered valuable and worth prioritizing," said one international patent lawyer.

If AMMS formally starts the application process in Japan, Fujifilm may not be able to sell Avigan as a coronavirus treatment in the country, dealing another blow to Fujifilm's ambitions for the drug.

Fujifilm has reported the issue to the health ministry, which is currently reviewing whether to approve Avigan as a COVID-19 treatment, according to people familiar with the matter. Usually, a company can try to strike down the patent by providing information to the patent office that proves that the invention is not new.

A Fujifilm spokesperson acknowledged the patent approval in China but said the company can offer no further comment.

Fujifilm acquired Toyama Chemical in 2008 as part of a push into health care after its core photo film business declined rapidly with the rise of smartphones. Toyama Chemical's patent on Avigan made the company an attractive target.

Initially discovered in 1998, Avigan was unique in that it prevented the virus from replicating inside cells. Early tests showed that it could be effective against viruses but Toyama could not secure enough funding for clinical trials -- a bottleneck that Fujifilm's deep pockets hoped to solve.

The bet on Avigan has delivered mixed results. In 2014, Japan's health ministry approved Avigan but with major conditions: It can only be administered as an emergency measure against new or re-emerging influenza, not for treating existing influenza. As a result, the government stockpiled Avigan for two million people, but the drug was not widely distributed.

COVID-19 offered a potential breakthrough opportunity for the drug. In March 2020, Chinese health authorities said that favipiravir was effective against COVID-19. By May 2020, former Japanese Prime Minister Shinzo Abe had sought government approval for Avigan.

But the review took months, and Japan's health ministry postponed in December approval of the drug, citing insufficient data. Fujifilm has not given up and restarted clinical trials in April. Phase 3 trials are also underway in the U.S. and Canada.

Meanwhile, Japan has been providing its Avigan stockpile to hospitals. Fujifilm said it sold another 1.6 million tablets to the government in the year ended March, a deal that analysts say could be worth more than $100 million.

Favipiravir has been approved for emergency use in India, Russia and Turkey, among other countries. Since Toyama Chemical's original patent has expired in most countries, Fujifilm is competing with local drugmakers which produce generic versions of the drug.

In Turkey, local drugmaker Atabay produces favipiravir domestically and markets it as Favicovir. The tablets are widely distributed to patients who test positive for COVID-19 and are required to isolate at home, said Mustafa Guzel, director of drug discovery at Istanbul Medipol University. He added that the locally produced drug costs $12 per box compared with $100 for some imported types, resulting in hundreds of millions of dollars in cost savings for the government.

"In the future, I believe this disease will become like influenza ... so this medication will probably last forever," Guzel said.

A boost in Avigan sales will help Fujifilm achieve its aggressive push into health care. In April, the company said it will target 860 billion yen in sales for its health care-related business in fiscal 2023 -- a 51% increase from the year ended March.

Kazuyoshi Saito, an analyst at IwaiCosmo Securities, said Avigan is a relatively small but profitable business for Fujifilm because it does not need to spend on research. "If it takes another few years for the pandemic to completely end, there will be demand for easy-to-store therapeutic drugs like Avigan," he said.

The health ministry just announced on July 12 that a special committee would meet to decide pharmaceutical company Chugai's application for approval under a simplified scheme to manufacture and sell a COVID-19 treatment. If approved, the drug will be the fourth coronavirus treatment in Japan.