A resort lies empty on Bali's Kuta Beach. One area business owner said: "If you go to the villages and see the people, you would cry." (Photo by Ian Lloyd Neubauer)
LALA SAMSURA, Contributing writerAugust 30, 2020 15:14 JST | Indonesia
CopyCopied

DENPASAR, Indonesia -- In most parts of the world, Sept. 11 marks the most infamous terrorist attack in living history. But in Bali it is an auspicious date on the Hindu calendar -- one that seemed like the perfect timing to reopen international borders and provide a much-needed boost for the tourism-dependent economy.

Those hopes were dashed in late August, however, after the central government announced Indonesia would remain closed until sometime next year because of the ongoing COVID-19 pandemic.

"We consulted Hindu priests who told us Sept. 11 was to be a good day," Bali's high-profile deputy governor, Cok Ace, told the Nikkei Asian Review. "But after discussions with the national government, we agreed to consider the real condition of the pandemic and prioritize the health and safety of both visitors and the Balinese people."

Ace insisted he does not feel disappointed. "Bali will reopen when the condition is better, hopefully, soon."

That day cannot come soon enough for the hundreds of thousands of Balinese whose livelihoods were directly and indirectly dependent on tourism and hospitality. Now they are struggling to make ends meet. Estimates by the Indonesia Institute, an Australian think tank, suggest up to 80% of the island's gross domestic product was linked to tourism before the crisis. Local calculations put the figure at 50% to 60%; irrespectively, the loss has been devastating.

"Last week I had to sell my wedding ring," said Bagus, the owner of a once-busy launderette on Kuta Beach who, like many Indonesians, goes by only one name. "If you go to the villages and see the people, you would cry. And things are getting worse."

Angelina, a former hotel worker in Nusa Dua, put the island's predicament in stark terms: "If we continue like this with no international tourism, Bali will die." Mountain biking in Bali with a view of Mount Agung: By one estimate, up to 80% of the island's GDP was linked to tourism before the pandemic. (Photo by Ian Lloyd Neubauer)

These fears were summed up by a Change.org petition signed by 4,000 Indonesians that called on President Joko Widodo to ensure the Sept. 11 reopening was not nixed.

"The purpose of the petition was to let the president know that more than half of the total 400-odd inbound tour operators in Bali are at the breaking point," said Jimmy Saputra, CEO of Pegasus Indonesia Travel, who initiated the petition. "Many are selling assets and still owe money to suppliers. If they go bankrupt there will be a domino effect with many hotels going under. And if the inbound tour operators are all gone, it will be very difficult to bring international tourists back to Bali."

Saputra, who specializes in the Russian inbound market, said he had already received more than 500 bookings for September.

But while Russian passport holders, who represent around 2% of Bali's international tourism market, can travel for leisure, nearly all of the source countries representing the remaining 6 million foreign tourists who visited Bali in 2019 still strictly prohibit it.

Talk of "travel bubbles" with China, Australia, South Korea and Japan has come to naught because of Indonesia's increasing infection rate. While Bali has gotten off relatively lightly with 611 active cases and 48 deaths as of Friday, the country itself was until recently the epicenter of the pandemic in Southeast Asia, with around 162,884 confirmed cases and 7,064 deaths.

This is one reason some believe the authorities made the right call.

"We appreciate that the decision to open or stay closed was a huge dilemma, and how keeping the borders closed throttles the finances of so many people in Bali," said Ross Taylor, president of the Indonesia Institute. "But it was the right thing to do because God forbid you let foreigners in, they catch COVID-19 and take it back home and Bali becomes a vector for the disease. That would be catastrophic for Bali's global image and hurt it much more in the long run."

Taylor added: "Australians would not go Bali, even if they were allowed, just as they wouldn't go to Italy or New York."

"Bali does not have a high standard of protocol for controlling COVID-19," he said. "The positive PCR swab testing rate is averaging between 10% to 20%, which the World Health Organization categorizes as a high rate of viral activity. The optimal rate is about 3% to 5%." Professor Gusti said the government already took a big risk when it allowed domestic tourism to resume on Aug. 1. Since then, about 2,500 tourists per day have landed at Bali airport -- mostly from the neighboring island of Java, the center of Indonesia's coronavirus epidemic. Visitors must present a negative rapid antibody test result that is no more than 14 days old to be granted entry and show no outward symptoms of COVID-19, such as a dry cough or fever.

But Gusti thinks this is not enough. "The protocol for filtering it out is too weak in my opinion," he said. "The rate of infection was decreasing in early August but since reopening, we have seen an increasing number of confirmed cases in Bali."

"We have to make sure the border screening system is at the gold standard before we reopen for international tourism, and the best way to do that is with PCR swab tests," he said.

The current system does not cut it, according to Budiman. "The rapid antibody test is useless because it doesn't show you a person's infective status, only their historical infective status. And in my view, tests should be done at the airport in Bali, not at passengers' place of origin, because many things can happen during the flight."

Owners of midsize and large tourism businesses in Bali -- who are more resilient to economic downturns than their smaller peers -- also laud the government's decision.

"Most of our customers were middle-age Australians, so I am the last one who wants Bali closed to foreign tourists," said Wati, the owner of Billy Ho, a once-thriving Pan-Asian restaurant in the surfing mecca of Canggu. "But it was a smart move. Everywhere else in the world the virus is surging but in Bali, we have a relatively low number of cases. If we were to suffer an outbreak, it would set the economy back even further." 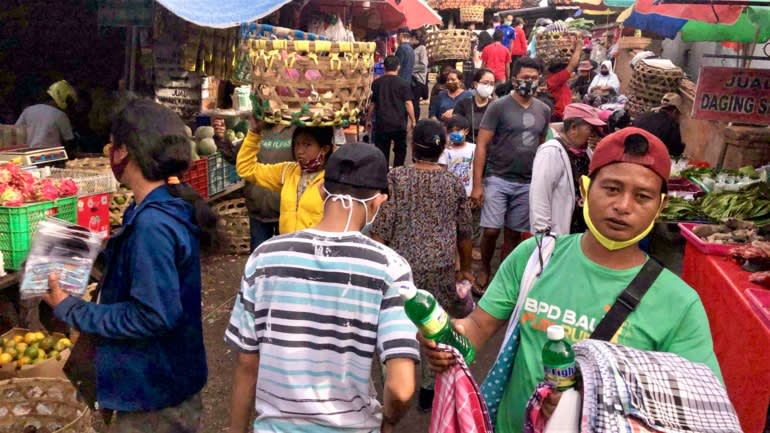 A crowded wet market in Denpasar: While Bali has so far been spared the worst of the coronavirus, Indonesia is one of the hardest-hit countries in Southeast Asia. (Photo by Ian Lloyd Neubauer)

Lucienne Anhar, co-owner of Hotel Tugu Bali -- a 21-suite art hotel with manicured tropical gardens in Canggu -- acknowledged the safety protocols already in place but called on the government to "look back at the opening model where travelers are required to have a valid negative PCR swab test result upon arriving at the airport."

So when will Bali finally open its gates to the foreign visitors who love it so?

Professor Gusti said this cannot happen until a vaccine is available -- or until three conditions are met.

"Firstly, the hospital occupancy rate in Bali should be in the mid- or low-range. Right now it's quite high; it's not easy to find a bed for sick people suspected of having COVID-19," he said.

"Secondly, we need transparency of data so governments abroad can understand we are screening passengers correctly. That will create trust."

Gusti said that even as a national health adviser, he cannot get up-to-date figures on the number of positive PCR tests in Bali.

"Thirdly, the number of positive PCR swab tests needs to be under 5% so we get the green light from the World Health Organization. Only then can we reopen for international tourism."