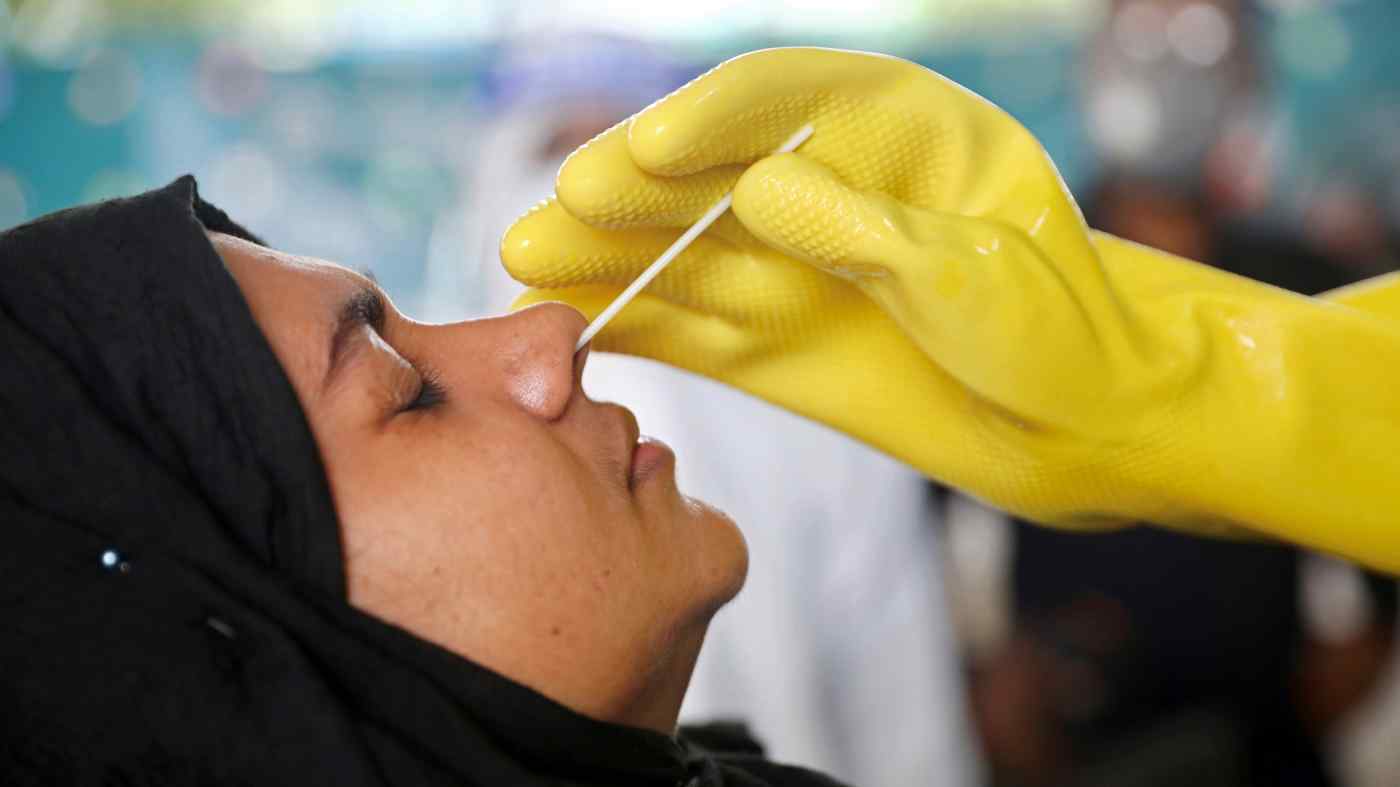 The coronavirus has devastated Bangladesh, but the nation, considered among the world's most corrupt, has also harmed itself with a fake negative test scandal.   © Reuters
A.Z.M. ANAS, Contributing writerJuly 28, 2020 15:00 JST | Bangladesh
CopyCopied

They have prospered amid the pandemic thanks to robust demand from migrant workers who require the paperwork as a condition for getting back to work in their destination countries.

The malpractice grabbed the global spotlight when Italy found 65 positive cases among 1,600 Bangladeshis with a recent history of traveling home.

The Ministry of Foreign Affairs has issued a statement saying none of the migrant workers carried fake coronavirus certificates, but it has also noted "a few might have spread" the lethal virus as they flouted a mandatory quarantine measure.

In public relations maneuvering intended to brighten the country's sullied image abroad, Bangladesh jailed some of the kingpins in June and July, and made it mandatory for air travelers to carry reports of negative virus tests. The reports must come from one of 16 approved laboratories. 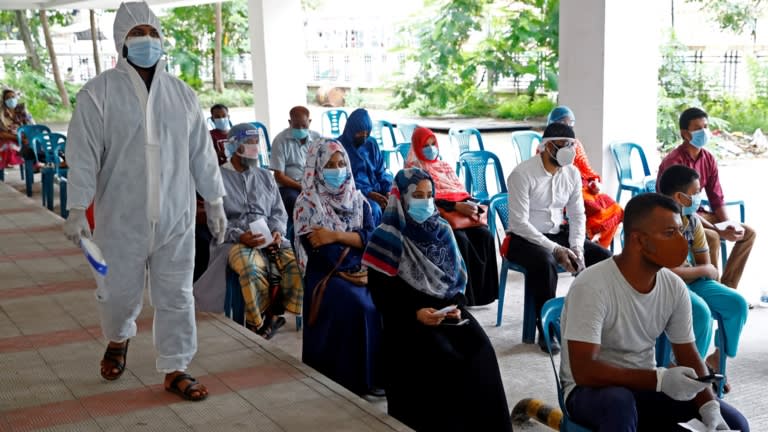 People wait at a coronavirus testing center in Dhaka on July 2.   © Reuters

A purge in the graft-ridden health sector has picked up speed as well.

On July 15, the Rapid Action Battalion, an elite police squad, said its agents arrested Mohammad Shahed, whose two unlicensed Dhaka hospitals landed testing contracts with alleged blessings from high-ranking officials in the health ministry. The arrest came in Bangladesh's southwestern border area as Shahed was trying to flee to India while wearing a black burqa.

Two other high-profile arrests preceded Shahed's -- those of government heart surgeon Sabrina Chowdhury and her spouse, Arif Chowdhury, who ran a laboratory in Dhaka that was allegedly counterfeiting documents.

The arrests coincided with Italy halting flights from Bangladesh until July 31, after it denied the entry of 165 Bangladeshis who had arrived on two Qatar Airways jetliners. Since the issues of fake certificates came to light, Japan, South Korea and China were among the first to suspend air travel with Bangladesh, a country of 170 million whose virus situation is far from clear.

"This is not the image Bangladesh wants," Tasneem Siddiqi, chair of the Refugee and Migratory Movement Research Unit, a think tank based in Dhaka, told the Nikkei Asian Review. "We'll get isolated."

Naming Shahed, Home Affairs Minister Asaduzzaman Khan Kamal said the business owner tarnished the country, which has largely overcome its "bottomless basket" identity. "When everyone else was busy fighting the coronavirus pandemic, Shahed was busy cheating," the minister said.

In the 1970s, then U.S. Secretary of State Henry Kissinger dubbed Bangladesh a bottomless basket, believing the country would be forever in need of charity. 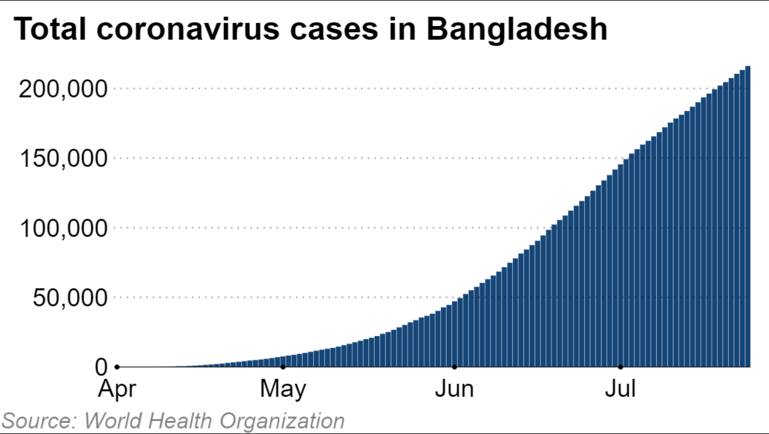 Analysts say proper virus screening is a must if Bangladesh wants to cushion the blow to its battered image.

"[We have] to show that we're doing the right thing on the ground," said Farooq Sobhan, president of the Bangladesh Enterprise Institute, a think tank in Dhaka. "We need to strengthen our airport arrangements."

Sobhan is a former foreign secretary.

She questioned who would pay for Bangladeshi migrants whose visas have expired. Some 15,000 Bangladeshis living in Italy are now stranded in the country, for example.

Italy hosts more than 140,000 Bangladeshis and is one of Bangladesh's biggest sources of remittances. It is hugely important, Siddiqi said, and "needs to be treated with lots of care."

It is also a "steppingstone" to Bangladeshi migrants aspiring to settle elsewhere in Europe or North America, analysts say.

But the deteriorating virus situation and test results scandal will substantially limit opportunities in Italy as Bangladeshis are not eligible to visit the Schengen Area -- the 26 European countries that allow people to move freely across their internal borders -- even as the European Union reopened its border early this month, as Bangladesh is deemed as not "safe" on epidemiological grounds.

For Bangladeshi nationals wishing to legally migrate to the West, family reunifications and student visas offer easier paths. At least they did. Bangladeshi undergrads are now likely to miss the semester that typically begins in late August or early September. "About 90% of student migrants [will] stay back," Siddiqi said.

An estimated 12.5 million overseas Bangladeshis sent home a record $18.32 billion in the 2020 financial year through June. A migrant worker from Bangladesh sweeps a street in Jdeideh, Lebanon on May 19.   © Reuters

The Anti-Corruption Commission, meanwhile, has formed a committee to probe the allegations against Shahed, Sabrina and her husband. "Our inquiry is ongoing," spokesperson Pranab Bhattachariya told Nikkei without elaborating.

Bangladesh's economy has been expanding at an average annual rate of 7% over the past decade, powered by exports, remittances and agriculture.

But the remittance situation is now stirring economic fears, as is that involving textile and other shipments.

In the fiscal year ended June, exports shrank by more than 25%, to $34 billion, as the pandemic took a toll.

There are other concerns. Muzaherul Huq, a former Southeast Asia regional adviser of the World Health Organization, said foreigners will no longer trust Bangladeshi businessmen, while the overseas class will be demeaned.

Bangladesh is perceived to be among the world's most corrupt nations as surveyed by Berlin-based Transparency International.

"Now it has been established," Huq said, warning that the anti-graft campaign should start at the top and include the health minister and the ministry's No. 2.