Becoming a father amid the pandemic: A Malaysian experience KUALA LUMPUR -- The elevator that usually brought us to the government maternity clinic was locked.

This meant extra walking for my heavily pregnant wife as we headed for the final checkup before the delivery of our first child, amid the fog of the coronavirus pandemic. We made our way to the main elevator and up to the third floor, where we encountered another clue that our labor experience would be anything but routine.

At the clinic's entrance, which was normally empty, health workers in full protective gear were screening a line of people. Each visitor had their temperature taken. As we inched closer, I could hear familiar questions. "Have you had a fever, cough or flu in the last two weeks?" "Have you traveled overseas in the last 14 days?" "Have you been in contact with COVID-19 patients?"

After waiting for 30 minutes, it was finally our turn. We were told that only the patient -- my wife -- would be allowed in.

Like many countries, Malaysia enforced a lockdown to contain the virus. For six weeks, starting March 18, all businesses except essential services were closed and residents were banned from leaving home without special permission. The government began easing some restrictions earlier this week, but our son was due on April 17, and he was not going to wait.

During the lockdown, my wife Kamalavacini Ramanathan and I had to go out for three checkups before the big day. Then, on April 16, we were off to Hospital Tunku Azizah, a public facility for women and children renamed this past January after Queen Tunku Azizah Aminah Maimunah Iskandariah.

"Can I come along?" my mother asked as we were preparing to leave for Kamalavacini's admission. As much as I wanted to bring her -- especially for her experience in handling the pain -- it was not an option. 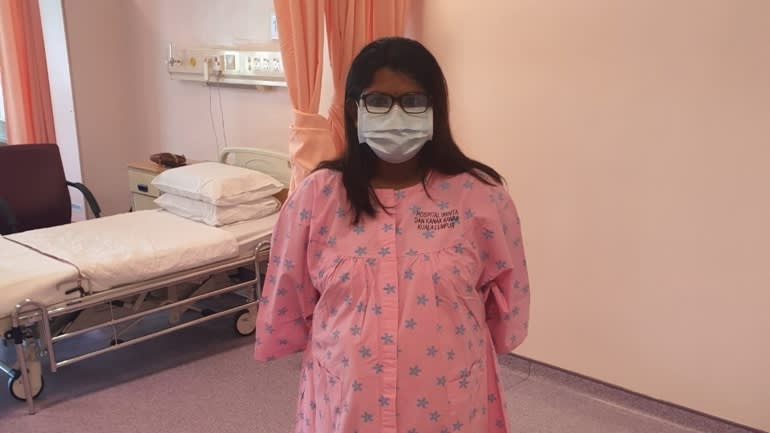 Kamalavacini on April 16, the day before she went into labor. (Photo by P Prem Kumar)

At the hospital, we went through yet another temperature check. The staff pasted round, green stickers on our shirts to show that we had been screened. A guard said nurses are allowed to chase anyone who does not have a sticker on.

Like everywhere else these days, the fear of contact with other people was palpable. The elevators had signs up, reminding us to practice social distancing. Comically, one man even seemed intent on avoiding eye contact.

Private health care has blossomed in Malaysia, and is comparable to more developed Singapore. But we had confidence in the expertise of the public system, even if one cannot expect top-class hospitality. Still, it came as a shock when, upon admission, I was abruptly informed that I would not be allowed into the maternity ward.

"We will only allow brief entry to deliver food, or if the doctor requests to speak to the husband," a policeman said with a stern expression.

Thankfully, the doctor assured me I would be allowed to accompany Kamalavacini during the delivery. This was a huge relief -- and lucky, as it turned out that an interim ban had been lifted only the week before.

On April 17, we had an early start. They induced labor at 6 a.m., beginning a contraction battle that would last over 17 hours. I spent most of the time at Kamalavacini's bedside: I brought food to the ward just in case, and tried not to leave, worried I would not be allowed in again despite the doctor's assurances.

At one point, the staff predicted our baby would arrive in the early hours of the next day. But he was ready to enter this crisis-wracked world by 11:30 p.m. We named him Gautham Dev.

Kamalavacini delivered him without painkillers, as the anesthesiologist was busy with two simultaneous operations and could not make it in time. The medical team, led by Dr. Nicole, gathered around us for moral support. Everyone in the room chanted repeatedly, "One, two, three ... push!"

After the birth, I left the room and walked about 200 meters to find a cellphone signal and inform anxious family and friends. Most of them are still upset that they could not be with us to help.

Even now, we have yet to receive any visitors. Although the government has relaxed the rules, allowing many businesses to reopen, it feels safer to minimize interactions as much as possible. Some friends have sent gifts via courier -- we're grateful for them.

In terms of baby necessities, we had stocked up on some essentials but planned to do most of the shopping closer to the delivery. That was before the lockdown. So we found ourselves depending on the very limited selections at neighborhood supermarkets.

I cannot say it has been easy. The lockdown has been loosened, but the fear of going out and contracting the deadly virus persists. After all, I'm no longer just a son and a husband, but also a father -- a heavy responsibility at the best of times.