Raw, seared, or none of the above? That is the question for sushi lovers BEIJING -- Two weeks after the coronavirus returned to the Chinese capital, rattling residents and the central government, restaurants here have been knocked off their recovery track.

A bus terminal in Sihui, a neighborhood 9 km east of Tiananmen Square, was rather quiet this week, with long-distance service suspended and the entrance to that section closed.

A new COVID-19 case confirmed June 11 and linked to a wholesale food market ended Beijing's roughly two-month streak of zero infections. Confirmed domestically transmitted cases in the capital reached 269 for the period from that day to Wednesday. With 36 new cases apiece reported on June 13 and June 14, usually bustling neighborhoods in Beijing emptied out again. Businesses switched to telecommuting, and even workers who still went in started going straight home after quitting time.

Subway ridership sank to a daily average of 5.6 million in the period from June 15 to June 19, down 35% on the week and 55% below year-earlier levels. Ridership recovered from around 600,000 in early February to 8.8 million on June 12, only to revert to levels seen in late April.

"Would you like your sushi raw or fire-seared?" a server asks customers at a Japanese restaurant that, like other eateries serving uncooked food, must now address public anxiety after the manager of the food market linked to the new outbreak said the new coronavirus was detected on a cutting board for imported salmon. Beijing is home to some 2,500 Japanese restaurants, many of them opened in recent years as Japan became a popular vacation destination for Chinese people. 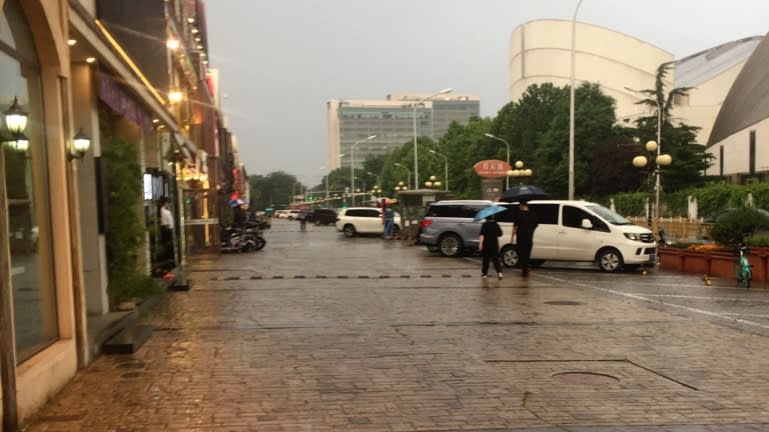 Few people can be seen on this Beijing street that is home to many restaurants on June 18.

Even before the second wave of COVID-19 hit, restaurants were recovering more slowly in the capital than other parts of the country. January-May revenue plunged 47% on the year in Beijing, compared with 36% nationwide, owing partly to strict security measures implemented in May for the annual National People's Congress.

To contain the new spike embarrassing Chinese President Xi Jinping and his government, Beijing has ramped up mass testing.

It took just three days to test 60,000 residents at an apartment complex in an area categorized as a medium-level risk zone. "Tests were carried out from 8 a.m. to 11 p.m. at a nearby park," a resident said. Restaurant and delivery workers were checked in all parts of the city, with mass testing covering some 3 million people.

The city is telling people to stay indoors for the holiday weekend that began Thursday, with tourist spots under strict admission restrictions. The near-lockdown in Beijing is feared to further damage the national economy, as the capital's metropolitan region accounts for close to 10% of China's gross domestic product.