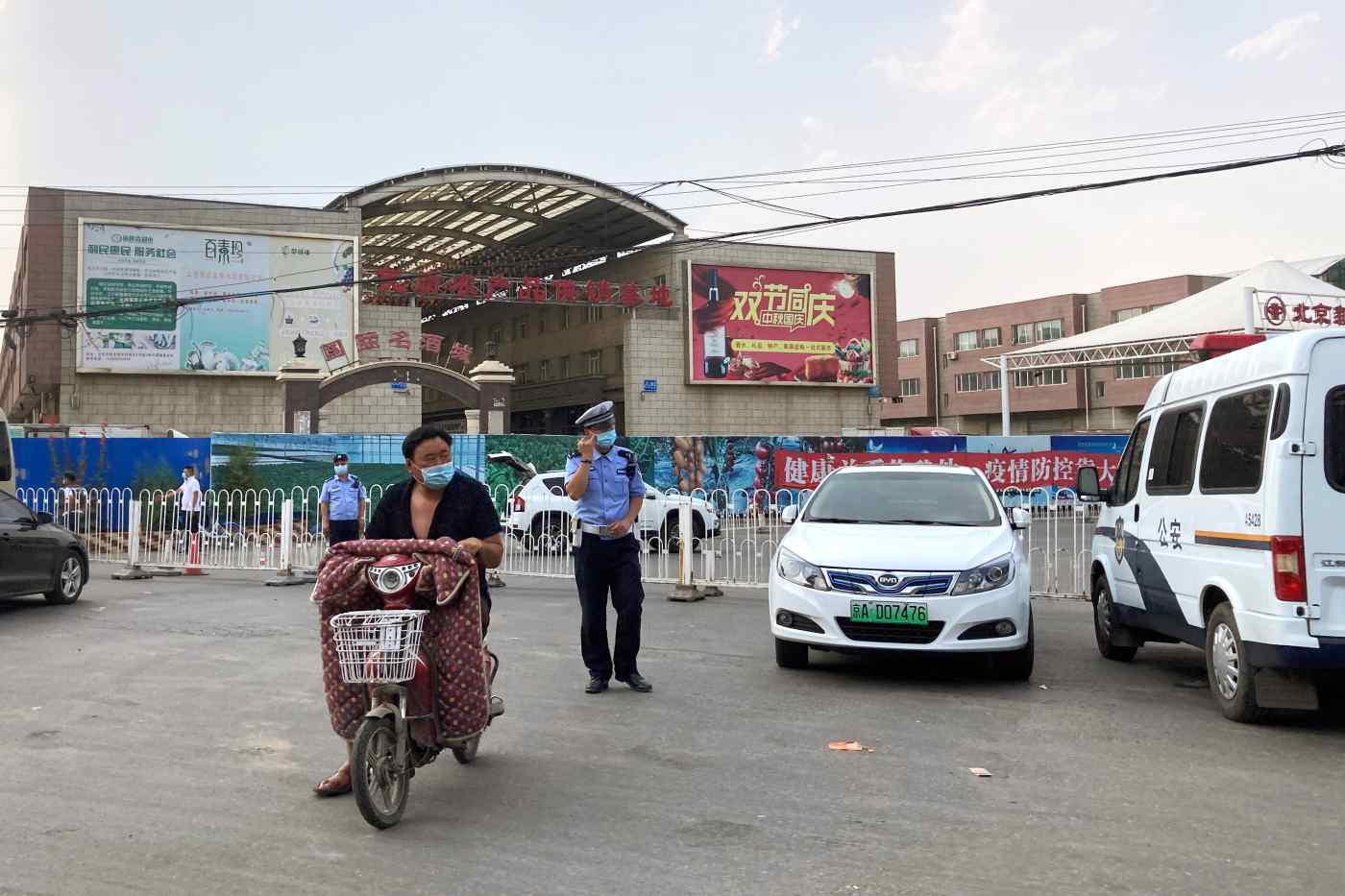 Police officers wearing face masks are seen outside the Xinfadi wholesale market, which has been closed for business after new coronavirus infections were detected, in Beijing, June 13.   © Reuters
June 14, 2020 23:22 JSTUpdated on June 15, 2020 03:01 JST | China
CopyCopied

BEIJING (Reuters) -- After weeks with almost no new coronavirus infections, Beijing has recorded dozens of new cases in recent days, all linked to a major wholesale food market, raising concerns about a resurgence of the disease.

The capital is taking steps to try to halt the outbreak including ramping up testing. On Sunday night Beijing ordered all companies to supervise 14-day home quarantine for employees who have visited the Xinfadi market or been in contact with anyone who has done so.

There had been almost no new coronavirus cases in the city for almost two months until an infection was reported on June 12, and since then the total number has climbed to 51, including eight reported in the first seven hours of Sunday.

According to the city's health authority, contact tracing showed all the infected people had either worked or shopped inside Xinfadi, said to be the largest food market in Asia, or had been in contact with someone who was there.

The market was closed before dawn on Saturday and the district containing the market put itself on a "wartime" footing.

The Beijing outbreak has already spread to the neighbouring northeastern province of Liaoning, where the provincial health authority said the two new cases confirmed on Sunday were both people who had been in close contact with confirmed cases in Beijing.

At least 10 Chinese cities, including Harbin and Dalian, have urged residents not to travel to the capital or to report to authorities if they have done so recently.

Huaxiang, a neighbourhood in the same district as the food market and which has one of China's biggest used car centers, raised its epidemic risk level to high on Sunday, becoming the only neighbourhood in the country to be on high alert. This status means there can be no economic activity until the outbreak is controlled.

As of 3 p.m. on Sunday, 10 neighbourhoods in Beijing had raised their risk levels from low to medium.

Like other countries around the world, China is concerned to prevent a second wave from emerging after easing lockdowns that hammered its economy earlier this year.

"Beijing will not turn into a second Wuhan, spreading the virus to many cities all over the country and needing a lockdown," a government epidemic expert told Health Times on Sunday, referring to the city where the epidemic in China first emerged late last year.

Zeng Guang, former chief epidemiologist at Chinese Center for Disease Control and Prevention and currently a senior expert with the National Health Commission, said the outbreak will likely be controlled after the initial spike of a few days, according to the report by Health Times, a paper run by state media People's Daily.

An epidemiologist with the Beijing government said on Sunday that a DNA sequencing of the virus showed the latest outbreak in the market could have come from Europe.

"Our preliminary assessment is the virus came from overseas. We still can't determine how it got here. It might've been on contaminated seafood or meat, or spread from the faeces of people inside the market," state media quoted Yang Peng as saying.

Officials said anyone who had been to or had contact with people who had been to Xinfadi since May 30 will be required to report to their work or residential units and get tested for coronavirus, the Beijing Daily said on Saturday.

Long queues for tests formed outside a hospital near the market on Sunday, pictures in the People's Daily showed

Beijing health authority spokesman Gao Xiaojun told the news conference on Sunday that anyone in the city with a fever will be given tests for the coronavirus, a blood test and a CT scan.