WUHAN, China/SHENZHEN -- The streets of Hankou, a popular shopping district at the heart of Wuhan, were packed Sunday night with people hunting for pre-Lunar New Year bargains at stores including L'Oreal, Nike and Muji.

The bustle stood in stark contrast to a year earlier, when the Chinese city sat at the very center of what the World Health Organization would later declare a coronavirus pandemic.

With Saturday marking a full year since the start of Wuhan's two-and-a-half-month lockdown over COVID-19, early Chinese steps against the disease remain a topic of global discussion.

China has claimed success against the coronavirus, attributed largely to strict lockdowns. But accusations persist that it has suppressed critical information on how the outbreak spread and just how many people were affected.

On Tuesday, Chinese Foreign Ministry spokesperson Hua Chunying defended her country's handling of the early outbreak, pushing back against a report Monday by an independent panel under the WHO that said Beijing was slow to respond.

"China was the first to sound the alarm for the world," Hua said. "In the face of an unknown virus, even though we didn't have all the information, we made a resolute decision." 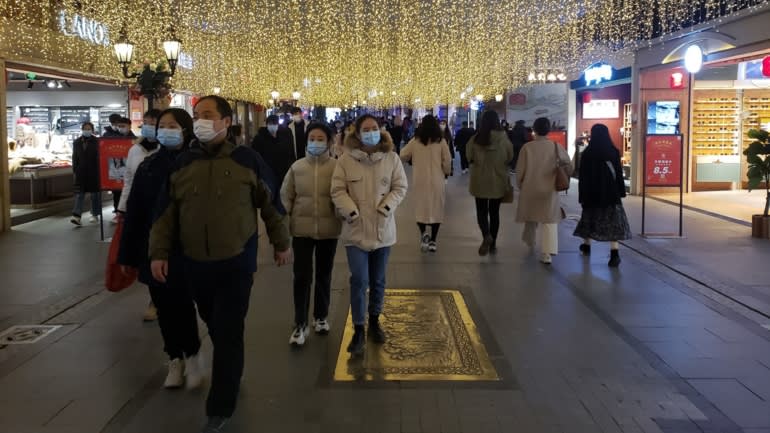 People stroll through a shop-lined street in Wuhan on Jan. 17. (Photo by Yusho Cho)

A year ago, the novel coronavirus quickly spread throughout the city and overwhelmed its hospitals. A wet market was seen as an early hot spot for infections, if not the origin of the outbreak. Doctors at the time were flying blind, treating patients largely through trial and error. Roughly 3,900 had died from COVID-19 in Wuhan by April, according to the authorities.

But not all the numbers claiming to capture the toll match. About 168,000 people were infected in Wuhan by May, according to a study by researchers from Wuhan University and Wuhan CMLabs. This is more than triple the official government count of 50,000.

A few people in Wuhan opened up about their experiences, asking not to be identified.

"My friend who died from the coronavirus had no choice but to live in a car in order not to infect family members," a 55-year-old shopkeeper said. The friend, who was a year older than the shopkeeper, could not find a hospital bed or receive adequate care even while experiencing severe symptoms.

A truck driver said: "One of my relatives died, but she was never diagnosed with the coronavirus, so she isn't included in the official death count." A Wuhan resident receives a test for the coronavirus on May 15. The city of roughly 11 million was locked down for two and a half months in early 2020.   © Reuters

Home to about 11 million people, Wuhan is a key industrial and commercial hub on the Yangtze River.

With the authorities insisting until shortly before they locked down the city that the coronavirus was not transmitted from person to person, roughly 5 million residents had traveled domestically and internationally ahead of the Lunar New Year holidays, which is believed to have accelerated the virus's global spread.

The city is now hosting an exhibition on its fight against the coronavirus. From mannequins in personal protective equipment to honor health care workers to photos of Chinese President Xi Jinping, the displays create a narrative of how the Communist Party contained COVID-19 in the city through the monthslong lockdown. 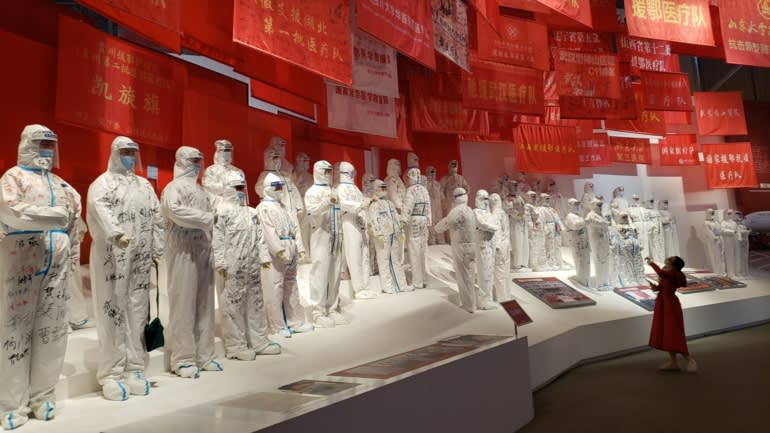 An exhibit in Wuhan celebrates the city's fight against the coronavirus during last year's lockdown. (Photo by Yusho Cho)

Not all agree that the government responded quickly or effectively. Shenzhen resident Zhang Hai said his father underwent bone fracture surgery in Wuhan on Jan. 20, 2020. The father later contracted COVID-19 and died.

"City officials suppressed information [on infection risks], worried it would impact their careers," Zhang said. He and at least four others have tried to sue the city of Wuhan and other authorities over their virus response, but their lawsuits were not accepted.

This past December, a court in Shanghai sentenced citizen journalist Zhang Zhan, who reported on the coronavirus toll on Wuhan, to four years in prison. Human rights lawyer Ren Quanniu, who was involved in the case, has been disbarred.

Xi's government has faced accusations of stifling dissent public views on the coronavirus and dragging its feet on approving the entry of team members in a WHO-led investigation into the origins of the virus.

At her news conference Tuesday, the Foreign Ministry's Hua said China "will continue to support WHO in playing a crucial leading role and keep up the close communication and cooperation with it," while adding that the country is "firmly against politicizing the issue of origin-tracing, which is not conducive to the joint global response."

China credits its success against the coronavirus to lockdowns, large-scale PCR testing and digital surveillance in Wuhan and elsewhere. China had an official cumulative case count of roughly 98,000 at midweek -- significantly lower than in the U.S., Japan or European countries. It also was the only major economy that grew in 2020.

Yet new infections have been creeping up since December. China has restricted the movements of roughly 40 million people across nine cities since late that month.

"My 1-year-old has a fever, but I can't go buy medicine," said a man in Shijiazhuang, Hebei Province. Public transportation has been halted there, and most residents have been stuck at home or their workplaces.