SINGAPORE -- Singapore and Osaka no longer lead the ranks of the world's most expensive cities, as the COVID-19 pandemic has applied some deflationary pressure, the Economist Intelligence Unit's latest Worldwide Cost of Living Survey shows.

The report, released on Wednesday, saw Singapore fall to fourth, from first place in the previous edition published in March. Osaka, which surprised many by tying for first in the previous survey, dropped into a tie for fifth with the Israeli city of Tel Aviv.

Hong Kong remained at No. 1 this time, joined by European cities Paris and Zurich.

The report explained that prices in Singapore have fallen after the pandemic spurred an exodus of foreign workers. The city-state's overall population, it noted, contracted this year for the first time since 2003 -- reducing demand and suppressing prices.

The survey was conducted in the August to September period, Upasana Dutt, head of Worldwide Cost of Living at the EIU, told Nikkei Asia. "Singapore and Osaka grappled with and addressed the pandemic issues at a later time in the year as opposed to Hong Kong," she noted. 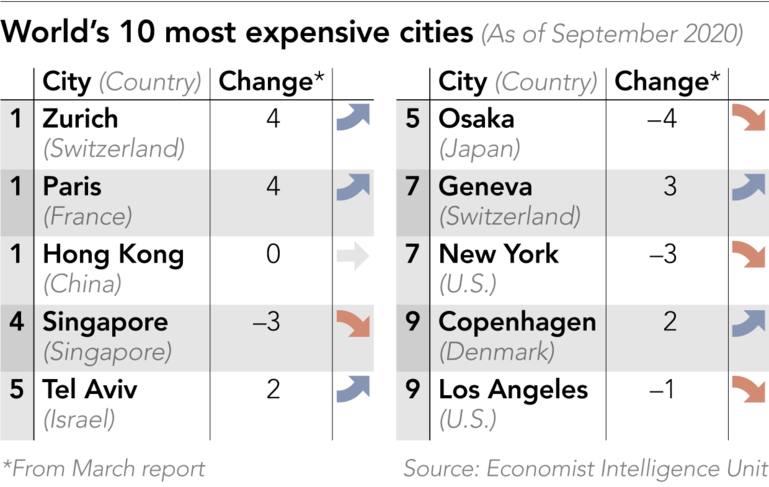 The study covered about 130 urban centers and compared more than 400 prices of around 140 products and services -- from food, beverages and clothing to household items and utility bills. The cost burden is measured through an index with prices converted to the U.S. dollar, using New York as a base city.

The EIU explained that for Paris and Zurich, their climb up the rankings was driven by the rise of the euro and Swiss franc against the dollar, as well as the comparative decline in Singapore and Osaka living costs.

While the coronavirus has reduced certain costs in some locations, it has also added other kinds of expenses.

The EIU said that for many, the shift toward working from home likely means extra spending on technology and office supplies not provided by employers. The researchers found rising costs of some products such as PCs, attributing them to greater demand as well as supply shortages stemming from manufacturing disruptions.

Health care and education fees have also increased in some of the most expensive cities, the EIU said. For instance, the cost of a routine medical checkup rose in Paris and Zurich.

Zurich also topped the list for education expenses, along with New York, with the American city seeing a rapid rise in the past year.

The report said prices for consumer staples were flat, while sales of clothing and footwear plummeted as nonessential stores were shut across countries during COVID lockdowns. While there has been a shift to online retailing, the EIU said many consumers delayed refreshing their wardrobes.

Fast-fashion brands and department stores were the most affected, weighing on prices. The study projected global consumer spending on clothing to fall by over 9% in 2020, before a slow recovery over the next few years.

"Although much will depend on the course of the pandemic, we expect similar price trends to continue into 2021 as in 2020," Dutt said.

"With the global economy unlikely to return to pre-pandemic levels until 2022, spending will remain restricted and put prices under downward pressure."