SINGAPORE -- Many Northeast Asians are reluctant to receive COVID-19 vaccinations even as the pandemic drags on into year two, a survey conducted for this week's World Economic Forum virtual meetings indicates.

The poll, conducted by Paris-based market researcher Ipsos, found the least sense of urgency for inoculations in South Korea. Only 14% of respondents there said they wanted to get vaccinated as soon as possible.

Japan was next at 22%, with China at 23%. Of the three countries, only China has begun vaccinations, with the others expected to start in February.

The contrast with some non-Asian countries was stark. In the U.S., 53% of respondents said they would opt for a shot immediately. In the U.K., 65% were ready to get jabbed. Other countries with high acceptance included Germany, at 55%, Brazil, at 62%, and South Africa, at 43%.

Experts discussing the findings in the WEF's Davos Agenda meetings, which run through Friday, saw a couple of possible factors behind public reluctance: a lack of trust, as well as less severe COVID-19 transmissions in Asia compared with Western countries.

"A lot of people don't trust by default," said Heidi Larson, a professor of anthropology, risk and decision science at the London School of Hygiene and Tropical Medicine. "It's about trust in the ability -- if you believe your doctor or your politician or your ... local health care worker, or system, is competent." The Ipsos survey polled over 12,000 adults online, across 15 countries. Respondents were between the ages of 16 and 74 and reported not being vaccinated as of the middle of January.

The report noted that "social media and the dark corners of the internet are full of conspiracy theories about the motivations behind mass vaccination and the potential risks of being vaccinated," adding that these theories and their advocates can influence public opinion.

But the report also stressed that vaccine doubts are not necessarily driven by belief in conspiracies.

For some, the speed at which new vaccines have been approved and uncertainty over medium- and long-term health risks are reasons to be cautious. Some reluctant individuals are "thoughtful people" who are hesitant because they feel they do not know enough to make the right decision, Ipsos said.

The tricky part, according to Ben Page, chief executive of U.K. arm Ipsos MORI, is to manage the deluge of information surrounding COVID-19 vaccinations, as it can be "too much."

"You tell people the facts in a rational way and they will believe you," said Page, who participated in the panel discussion with the London School's Larson. He added that the evidence over the last "two decades or more is that increasingly, we need to use both emotion and fact to communicate."

Ipsos observed that early vaccine success can build confidence and increase demand. Among overall respondents who were open to vaccination, 44% said they wanted shots immediately. Groups most interested in getting to the front of the line included older citizens, the more affluent and those who had higher trust in government.

Tan Chorh Chuan, executive director of the Office for Healthcare Transformation in Singapore's Health Ministry, noted the wide variation in global opinion. In his remarks on the Davos panel, he said that in the city-state, "the COVID situation has been quiet for some months," and that "things feel pretty normal" save for the need to wear masks in public and observe safe distancing. 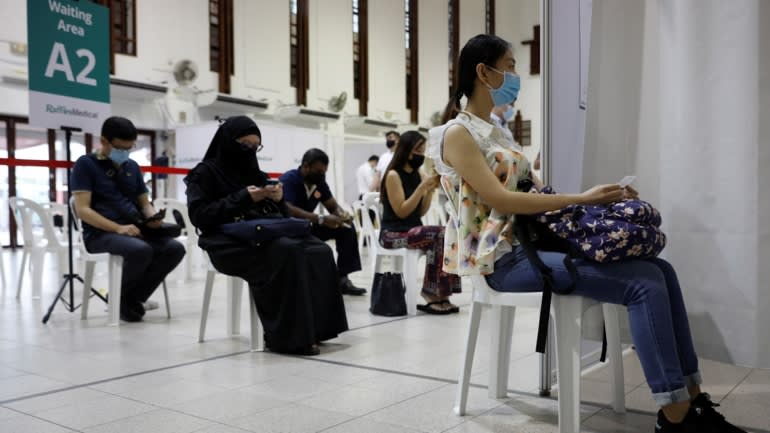 Health workers await their shots at a new vaccination center in Singapore on Jan. 26.   © Reuters

Due to an explosion of virus transmissions earlier last year in densely packed dormitories housing foreign workers, Singapore has recorded nearly 60,000 coronavirus cases. But lately the country has kept a lid on dramatic infection spikes.

Although the Ipsos survey did not list Singapore as one of the 15 countries covered in the poll, Tan acknowledged that the relatively controlled situation could contribute to vaccine hesitancy.

Like elsewhere, he said, residents in the country harbor concerns about vaccine safety and are not shielded from false information. Tan said the government is working to raise awareness of his vaccination drive while establishing a framework that makes getting inoculated convenient.

"There will be rising confidence among society," he said, "and we expect that the [vaccine] take-up rates will then start to increase quite sharply."