A 40-degree fever and splitting headaches: The delta variant up close TOKYO -- New coronavirus variants, such as the highly infectious delta variant, are spreading rapidly in Japan. For a vaccine to be most effective, a certain period of time beyond the second dose is necessary, and people who have received only one dose are still at high risk of being infected by a mutated strain. In my case, I (age 45) was infected with a mutated strain after receiving my first vaccination at my workplace. I suffered from a high fever and severe headaches for several days. People must remain cautious about the risk of infection when not fully vaccinated.

I got my first dose of the Moderna vaccine at Nikkei's main office in Tokyo on June 24. There were no noticeable side effects, aside from some slight pain in my arm. Even after the vaccination, I avoided evening gatherings, and I commuted early in the morning and after rush hour in the evening to avoid large crowds. My second dose was scheduled for the end of July.

I broke into a fever on the night of July 3, nine days after my vaccination. Feeling feverish, I got under a blanket and took my temperature -- 38 degrees Celsius. On that day, a mudslide had occurred in the city of Atami in Shizuoka Prefecture, and I was set to come into work on July 4 to cover the situation. "The fever should be gone by morning," I told myself as I tried to fall asleep.

But my temperature continued to rise, and by dawn on July 4, it had reached 39 degrees. I could not sleep and checked the thermometer several times, but it would not go down at all. Before long I began to sweat profusely. After an hour or so, my clothes would become soaked, and I would have to change them. The five T-shirts I had bought in bulk at Uniqlo to wear at night had run out by morning.

If this was a normal cold, sweating this much would have brought down the fever. But my temperature was still high, so I contacted my supervisor to ask that someone cover for me.

As my temperature increased, I began to have a headache more severe than any I had ever had before. The slightest attempt to move my head jolted me as though my skull had been pierced by a nail. It was so difficult to even turn from lying on my back to my side that all I could do was endure the fever and pain in the same position.

By the morning of July 5, my fever still had not gone down. I made an appointment with a clinic near my home that would treat people with fevers after the morning general practice. "We'd like you to call us from the front door when it's time," they said.

The clinic was on the third floor of the building. I arrived and called as instructed, and the person in charge came down using the emergency exit outside the building. The idea was to avoid the elevators and go up using the stairs. After getting checked in, I was called into the examination room based on a medical form I had submitted online beforehand.

"It's not certain, but I don't doubt it's the coronavirus," the doctor said with a concerned look. "It's been too long since your vaccination for that to cause the fever." While I could not recall having come into contact with anyone infected, I also could not see any other reason for my persistent high fever. "Let's do a PCR test," the doctor said. In a separate room, I collected saliva into a plastic test tube and gave it to the physician. There were already several people waiting their turn in the waiting room. I would learn my results the next morning.

On the morning of July 6, I received a call from the doctor around 8:30 a.m. "Your test was positive." I was shocked. Where had it happened? Why me? How? My mind spun as I ran over these questions. "You'll be contacted by the public health center, so please follow their instructions," the voice on the phone continued in a matter-of-fact manner.

The call from the public health center came about three hours later. Based on my symptoms and the Tokyo Metropolitan Government's hospitalization decision flow chart, a fever of 39 degrees meant hospitalization. It had already been four days since my symptoms began, and I was exhausted. Now I had to prepare to stay in the hospital. "They may not make a decision today because of the rush of infections," the person said, but within an hour I received word that the authorities had decided I would be admitted.

My 10-year-old son, who had stayed home from school just in case, plopped down on the table and cried. Even though news about the coronavirus has become routine, it is still scary to have someone close to you become infected.

I packed a change of clothes and got into a special shuttle cab that was dispatched to my house by the health center. The front and rear seats were separated, and the rear seat had a vacuum cleaner-like suction nozzle that roared as it sucked in air. As soon as I entered the hospital room, I was started on an IV drip of remdesivir (Veklury). (Photo by Naohiro Yamamoto).

When I arrived at the hospital, I was put in a wheelchair and taken straight to the computed tomography (CT) room. "Normally we'd get a consent form first, but since we're in this situation ..." the doctor said. After the scan was finished, I was carried through an intricately zoned ward and taken to a four-patient room.

The CT scan images arrived soon after. "We can see some white pneumonia shadows," the doctor said. They drew some blood and started me on an IV of the antiviral drug remdesivir right away. According to the Ministry of Health, Labor and Welfare, a patient who has "pneumonia symptoms but does not require oxygen inhalation" is considered to have a "mild to moderate" case of the disease. If there is no evidence of pneumonia, the patient is mildly ill; if there is pneumonia and oxygen inhalation is needed, the patient has a slightly severe moderate case. If it becomes severe enough to require attention from the intensive care unit or the use of a ventilator, it is considered a serious case. 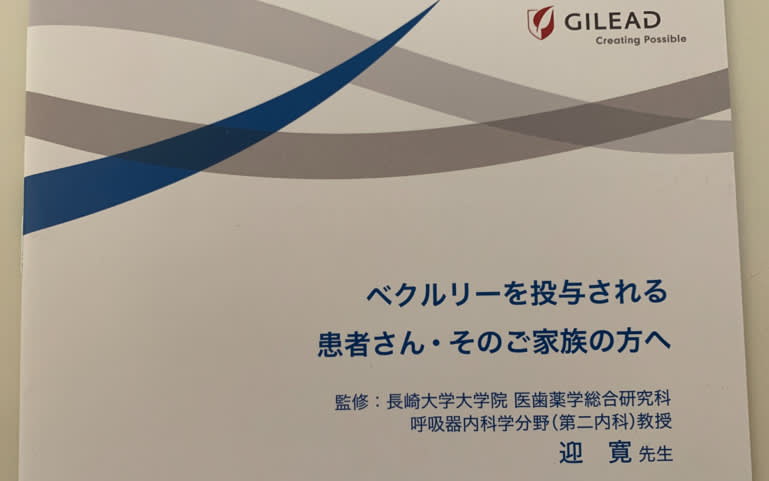 A description of remdesivir (Veklury) from the manufacturer, U.S.-based Gilead Sciences. It contains information on possible side effects.

The blood oxygen level measured through my fingertips indicated a value of around 95%. The values are constantly monitored, and if they drop significantly, an alarm sounds at the nurses' station.

The booths, separated by curtains, measure almost 4 sq. meters. The room was cramped, with only a small storage space apart from the bed, and I understood why the initial questionnaire had asked me if I had issues with claustrophobia. The room had a shared toilet and shower, and leaving was strictly forbidden. Shopping happened twice per week -- I would tell the nurses what I needed, and they would buy it at the convenience store. There were no changes of bedsheets during my hospitalization, nor could I meet my family.

Although I had moved to the hospital, my high fever and headache were unchanged. I took acetaminophen, a painkiller that would lower my fever, after each meal, and my temperature would drop to about 38 degrees for a couple of hours. But it would always go up again. The nights were particularly tough, and on my first night in the hospital my temperature shot up to 40.7 degrees, and stayed at 40.2 the next day. I was unable to sleep at all, and could only wait for dawn to break.

I had never experienced a fever above 40 degrees before. When I would close my eyes, rather than my vision darkening, I saw a strange world of vivid colors. It felt as though I were dreaming, even though I was awake -- as though I were in the middle of a hallucination. My blood oxygen level was constantly monitored, and a warning sounded if it dropped significantly. (Photo by Naohiro Yamamoto).

As there is no medicine to treat coronavirus infections directly, the high fever and headaches can only be addressed through treatment of the symptoms. I did not have much appetite, but I managed to eat the food that was given to me. I could not sleep, so I just lay down and waited for the fever and pain to subside.

On my third day of hospitalization, the fever finally started to fade. In the end, I spent three days in the range of 39 to 39.9, and two days between 40 and 40.9 degrees, including the days before I was admitted. I spent nine days in the hospital, and was discharged after going three days without needing drugs to reduce my fever.

In the middle of all of this, I received a call from the public health center: "Our screening test confirmed that you were infected with the mutated form L452R." This mutation is characteristic of the delta strain. The discovery made me realize firsthand just how much it has spread throughout Tokyo.

I had some coughing, but no consistent breathlessness. My symptoms were mainly the fever and headache. Even so, when my fever did not go down day after day, I despaired. "How long can this go on?" I wondered.

During my sleepless nights, I would hear violent coughing from the other patients near my room throughout the night. At one point a deafening ER call suddenly rang out throughout the ward late at night. A certain percentage of cases reportedly turn severe during the course of the disease, so my fear never went away.

And the burden on the medical staff is also immense. They have to wear protective clothing, goggles and masks at all times. Even in a room that holds four patients, they have to change their gloves and thoroughly disinfect everything after dealing with each patient. A chill still runs down my spine when I think of the first wave last year, when there was a shortage of personal protective equipment. 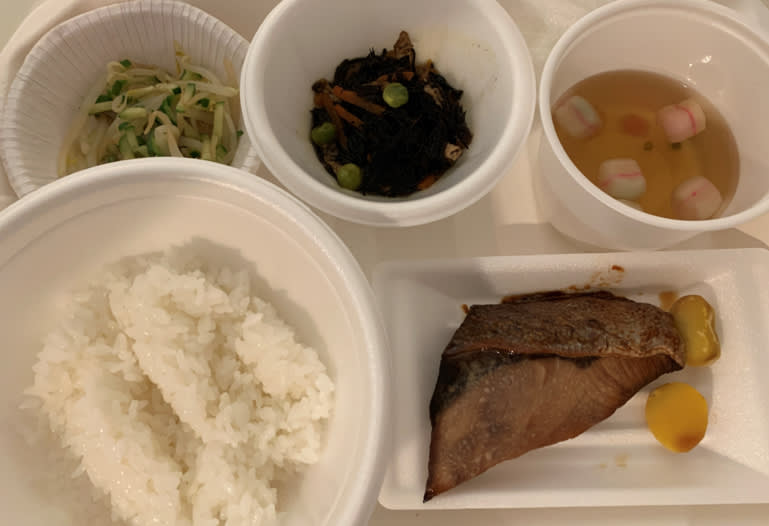 All of the dishware for coronavirus patients is disposable.  Nurses change their gloves every time they visit a patient's booth. (Photo by Naohiro Yamamoto).

My wife and son both received negative results on their PCR tests. However, under the current rules, even if someone who came in close contact with a COVID patient tests negative, they still cannot go out for 14 days. It is no small thing not to be able to attend school for two weeks.

I still do not know how I was infected, but I was reminded of the importance of basic prevention measures: Always wear a mask, wash my hands, and avoid unnecessary meetings and crowded places. "We've gotten our first shot, so let's go out drinking!" The consequences of such a carefree attitude may be far heavier than one imagines.