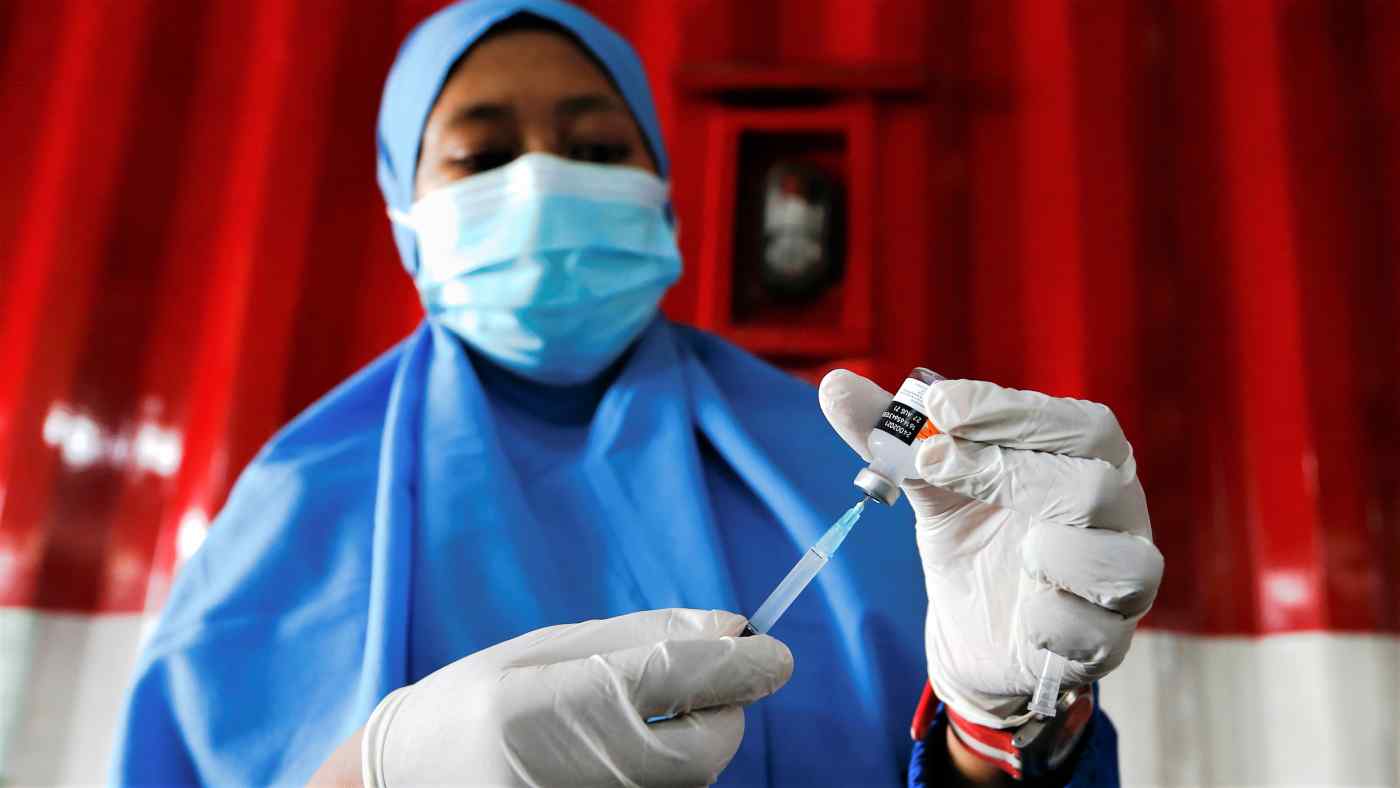 A health care worker prepares a Sinovac shot in Jakarta: The Chinese vaccine made up 90% of the doses Indonesia had received as of late June.   © Reuters
SHOTARO TANI, Nikkei staff writerJune 28, 2021 13:59 JST | Indonesia
CopyCopied

JAKARTA -- Indonesia is battling its fiercest COVID-19 outbreak yet, setting another new daily infection record on Sunday with over 21,000. At the same time, doubts are growing over the Chinese vaccines it and other Southeast Asian countries are counting on.

So far, all but a small fraction of vaccines delivered to Indonesia have come from China's Sinovac Biotech -- shots declared halal by the nation's Islamic authorities. But some health workers inoculated with Sinovac jabs have been hospitalized. A few have even died despite being fully immunized.

Chinese President Xi Jinping vowed in May 2020 that his country's COVID-19 vaccines would be a "global public good," promising developing countries "vaccine accessibility and affordability." Fast forward a year, and China has arguably delivered. But where do the questions about efficacy leave Indonesia and other Association of Southeast Asian Nations members that have included Chinese shots in their orders?

Here are five things to know about China's vaccines.

How widespread are Chinese vaccines in Southeast Asia?

According to data compiled by the Duke Global Health Innovation Center in the U.S., vaccines made by China's Sinovac, Sinopharm and CanSino Biologics make up 58.5% of Indonesia's confirmed dose orders, and 44.6% of Malaysia's. The figures are lower in other countries like the Philippines and Thailand, standing at 16.8% and 17.3%, respectively, though some order quantities are listed as "unknown."

Indonesia would not have been able to start its mass vaccination program in January without Sinovac shots. The vaccines made up 90% of the 104 million doses the archipelago nation had received as of late June. Sinopharm vaccines accounted for a further 1.9%, with the rest consisting of AstraZeneca vials obtained through COVAX, the international program for equitable vaccine access.

"Indonesia is dependent on vaccines from China ... because only China can meet the number of vaccines needed for Indonesia," said an official at Indonesia's Health Ministry. The country aims to inoculate 181.5 million people, or 70% of its population, in around a year to achieve herd immunity. The government estimates the country will need 426.8 million doses, taking waste into account.

Some criticize China's supply deals as "vaccine diplomacy" that might have strings attached. The Group of Seven industrialized countries in early June came up with a counterplan of providing 1 billion vaccines to poorer nations.

But experts have warned this is too little, too late. 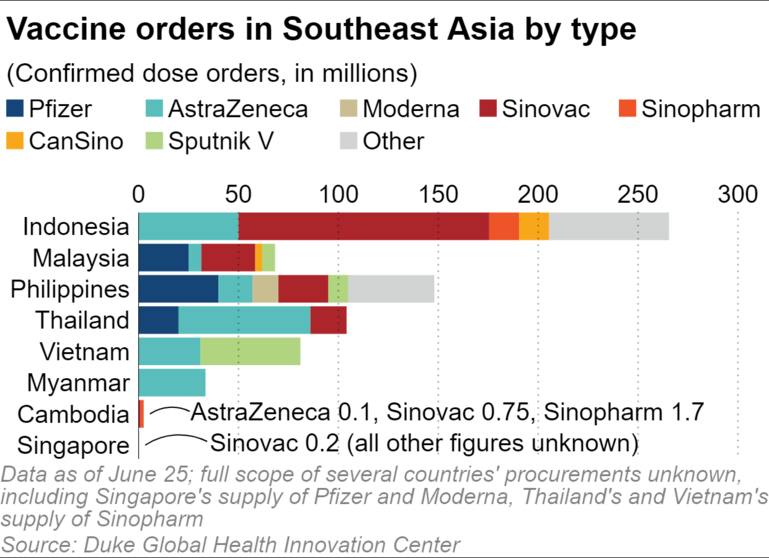 How do Chinese vaccines stack up against other options?

The World Health Organization says two doses of Sinovac showed 51% efficacy against symptomatic COVID-19 infection in a large Phase 3 trial in Brazil. That is lower than the figures for other vaccines, but Sinovac was found to offer 100% protection against severe symptoms and hospitalization. A study by Indonesia's Health Ministry, conducted between January and March and released in May, also found the vaccine to be highly effective among its health care workers.

Two shots of Sinopharm, meanwhile, had an efficacy rate of 79% against symptomatic infection and 79% against hospitalization in a large multi-country trial, according to the WHO. For comparison, the Oxford-AstraZeneca vaccine had 63% efficacy.

The Pfizer-BioNTech and Moderna shots use different technology. Unlike regular vaccines that inject weakened or inactivated virus, these two mRNA vaccines "teach our cells how to make a protein ... that triggers an immune response inside our bodies," according to the U.S. Centers for Disease Control and Prevention. The Pfizer shot has shown a 95% efficacy rate, with Moderna's close behind at 94%, the WHO says.

The Sinovac and AstraZeneca vaccines, however, can be kept at standard refrigerator temperatures -- whereas mRNA doses must be stored at about -80 C. This means the conventional options are better suited to developing countries that lack extensive cold-chain infrastructure.

How have China's vaccines been received?

The reception has been mixed.

In the Philippines -- where vaccine hesitancy is generally strong and President Rodrigo Duterte has threatened to imprison those who reject the jabs -- faith in Chinese vaccines was markedly lower compared with Western options in a survey early this year. The poll by OCTA Research showed only 19% of respondents said they were willing to be inoculated, with only 13% of them saying they trust shots from China, while 41% preferred vaccines from the U.S.

Thais have also shown distrust of Chinese vaccines amid broader disillusionment with their country's inoculation drive.

In March, opposition politician Thanathorn Juangroongruangkit accused the government of relying too much on AstraZeneca, for which Siam Bioscience -- a company owned by King Maha Vajiralongkorn -- holds a production contract. But other anti-government groups have criticized the government for taking Chinese vaccines despite questions over their efficacy.

Viral posts on social media have shown Thai celebrities flying to the U.S., apparently to get Moderna or Pfizer shots.

Vietnam, meanwhile, was initially reluctant to accept Chinese vaccines due to Hanoi's geopolitical tussles with Beijing. But as it struggles to secure enough shots to accelerate its campaign, Vietnam became the latest ASEAN country to receive Sinopharm doses on June 20, when it took a delivery of half a million.

Indonesians, too, were wary of Chinese vaccines early on. But while the Indonesian Ulema Council, the country's top Islamic body, has said it is acceptable for Muslims to take the AstraZeneca vaccine, it did not classify it as halal, or permissible under Islamic law. So the take-up of Sinovac shots, which have been deemed halal, is increasing. 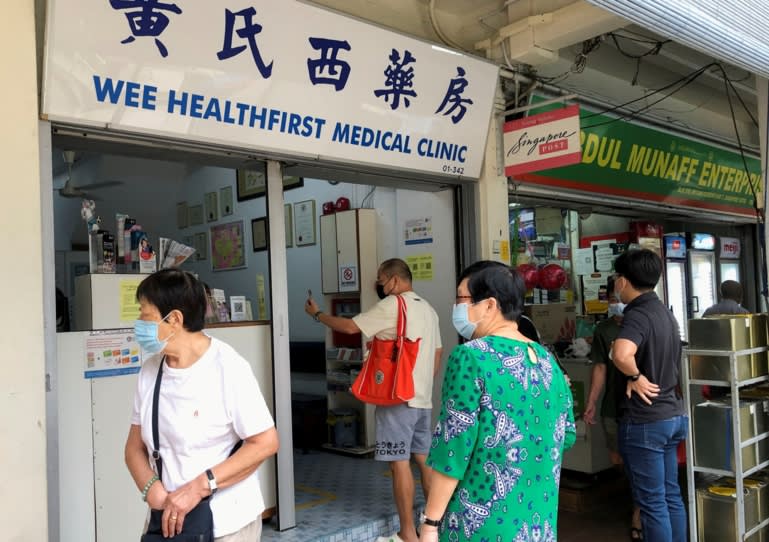 People line up to ask about Sinovac shots at a clinic in Singapore on June 18.    © Reuters

In Singapore -- which is using only Pfizer and Moderna shots for its mainstream vaccination program -- interest in Sinovac is high. The government placed the Chinese shots under a "Special Access Route" system, allowing private clinics to administer them to those who wish. Authorities say there are around 2,000 individuals in Singapore who had severe adverse reactions to the Pfizer and Moderna vaccines who could consider taking the non-mRNA Sinovac if they do not want to wait for other alternatives to be approved.

Some, it seems, simply prefer the conventional technology. "Chinese Sinovac is safer [with] low side effects," said Lian Jie, a Chinese national living in Singapore, echoing the views of many in her community.

What are the doubts being raised?

Around the world, reports have cast doubt on the Chinese vaccines, especially their effectiveness against mutated strains like the more infectious delta variant.

Seychelles, which began immunizing its population in January using Sinopharm vaccines, tightened restrictions in early May due to an increase in infections. Chile, seen as an early real-world test of Sinovac, has faced new infection waves despite widespread vaccinations. The United Arab Emirates decided in May that it would offer a third Sinopharm shot to try to boost the protection.

Then, earlier this month, 350 doctors and medical workers in the Indonesian town of Kudus were reported to have caught COVID-19 despite taking Sinovac jabs. Dozens were hospitalized.

The Indonesian Doctors Association says that of the 14 doctors who died from the virus between February and May, 10 had been fully vaccinated with Sinovac, while the rest had been given one dose. One problem with Chinese vaccines is a general lack of data, making it difficult for policymakers to adequately assess them.

Dicky Budiman, an epidemiologist at Australia's Griffith University, said that in his own simple survey looking at breakthrough infections - patients who caught COVID-19 after full vaccination -- the majority were Sinovac recipients.

Even so, he said his findings suggest Sinovac is "still effective."

"About 50% of the respondents were asymptomatic or [had] very minor symptoms," he said. "Also, less than 1% died."

The Indonesian health ministry official agreed. "Only 30% of the health care workers in Kudus who caught COVID-19 were hospitalized," he said. "The rest are undergoing self-isolation at home because they only have mild symptoms or even no symptoms. If there are no comorbidities, the vaccine has the effect of reducing the severity."

What does China say?

In China, state media has shifted into overdrive defending domestic vaccines following the negative reports on Sinovac out of Indonesia.

Sinovac recently told the state-run Global Times tabloid that its jabs can reduce infection risks and prevent death but could not provide 100% protection.

In contrast, Western vaccines have received poor publicity even though Chinese authorities are reportedly reviewing Pfizer's offering for local use. The Chinese Center for Disease Control and Prevention released data on May 28 showing that, on average, 11.86 out of 100,000 doses of domestic vaccines resulted in adverse reactions including fever, swelling and acute allergies. The Global Times said Pfizer results in Mexico showed 161.36 such cases per 100,000 doses.

China has also eased entry requirements for foreigners in selected countries who have taken its vaccines, creating another incentive. In practice, however, the relaxed policy is subject to final approval by Chinese embassies, where officials continue to impose tight controls for fear of being blamed for sending infections home.