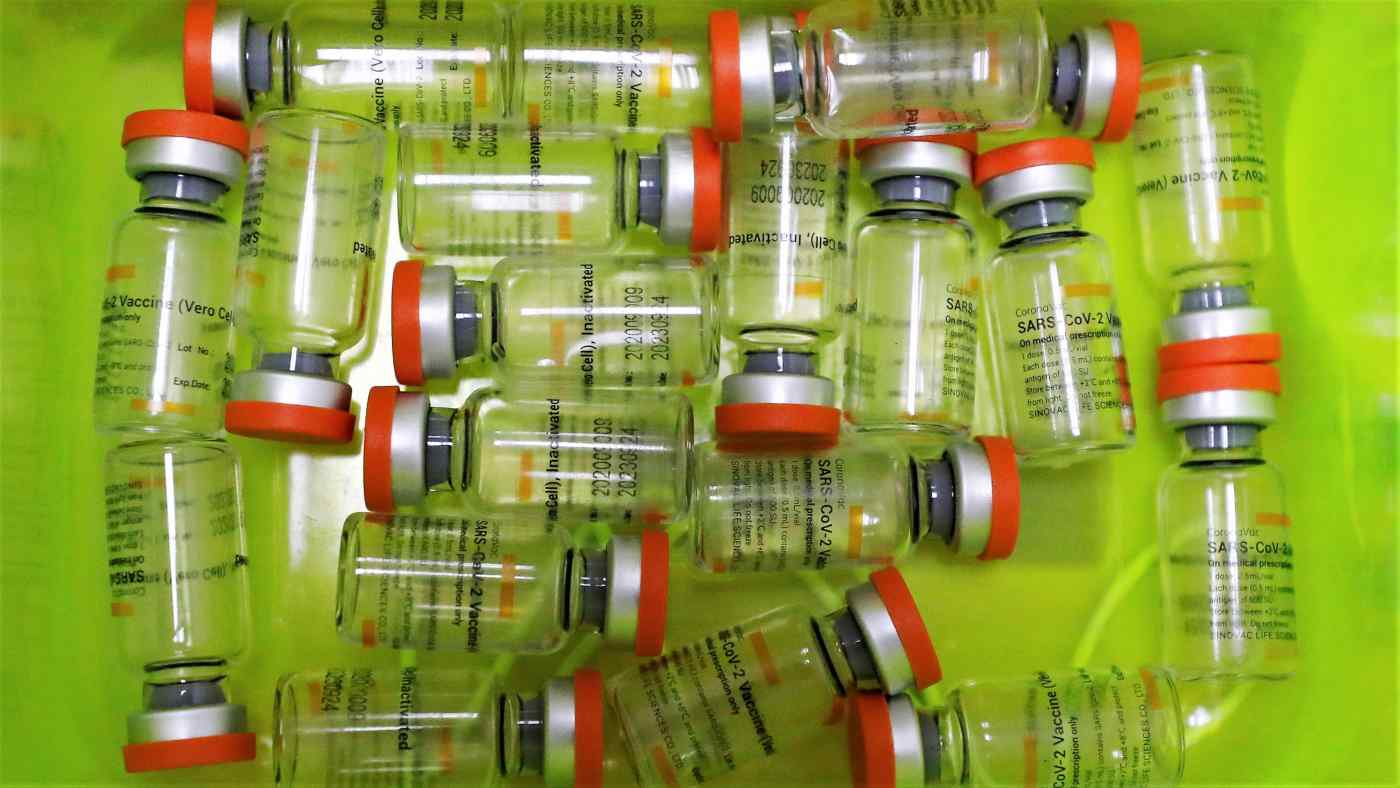 JAKARTA -- With the advent of COVID-19 vaccines, the hope was that a straightforward two-dose regimen would carry countries toward herd immunity.

But faced with myriad issues -- from the spread of the highly transmissible delta variant to supply shortages and doubts over certain vaccines -- authorities around Southeast Asia are rethinking their inoculation strategies.

Increasingly, officials are looking at administering third doses to at-risk individuals for an extra layer of protection, and in some cases "mixing and matching" vaccine types.

Here is a rundown of what Southeast Asian countries are doing.

Who is resorting to the "mix and match" method?

Thailand became one of the first in Southeast Asia to officially give the go-ahead to administer different first and second vaccine doses last week. The country's National Communicable Disease Committee issued a recommendation to give AstraZeneca jabs as the second dose to individuals who had initially received China's Sinovac.

Mixing and matching vaccines will "help increase immunity in a shorter time," said Yong Poovorawan, head of the Centre of Excellence in Clinical Virology at Chukalongkorn University. While two doses of AstraZeneca vaccines "need to be spaced out 10-12 weeks," he added, the Sinovac-AstraZeneca combination could be administered in a shorter period.

"This is the best way to manage what we have now efficiently," he said.

Mixing and matching is also under consideration in the Philippines, where officials met last week to discuss the prospect. Dogged by what have been called "unpredictable" vaccine deliveries, the country in May announced an 18-month study on mixing Sinovac jabs -- the most stable supply -- with other vaccines being administered in the Philippines, such as AstraZeneca, Pfizer, Moderna and Sputnik V.

"Ideally, an individual should complete two doses of vaccine using the same product," said Fortunato de la Pena, secretary at the Department of Science and Technology. "However, we cannot ignore the existing shortage in the global vaccine supply. There is urgent need to ascertain the interchangeability of COVID-19 vaccines, as administering the second dose of vaccines with a two-dose regimen is vital in inducing the needed level of protection against the virus."

The Vietnamese government also announced last week that it intends to offer Pfizer shots to those who have received AstraZeneca as their first dose. How has mixing and matching been received?

Thailand's mixed vaccination scheme quickly hit a snag, after Prime Minister Prayuth Chan-ocha urged authorities to thoroughly study the safety of combining different shots. Major hospitals in several cities temporarily suspended vaccinations as they were unsure what policy to follow, though some resumed the shots after receiving AstraZeneca supplies. Officials clarified that Prayuth was not against the policy, local media reported.

Also last week, the World Health Organization's chief scientist, Soumya Swaminathan, had called vaccine mixing a "little bit of a dangerous trend" and warned of a "chaotic situation" if citizens start picking and choosing shots on their own.

In Malaysia, which has struggled to arrest its own virus surge, the minister in charge of immunizations said earlier this month that the country would not be mixing doses for now due to "inconclusive" data, according to local media. A worker disinfects an ambulance that carried the coffin of a person who died from COVID-19 in Thailand's Nonthaburi Province, near Bangkok, in early May.   © Reuters

Yet there is also widespread acknowledgment among scientists that mixing the first and second shots could be beneficial. Ines Atsmosukarto, CEO of Australian vaccine research company Lipotek, explained, "From a mechanistic point of view, different platforms stimulate the immune system in different ways and by mixing, we aim to broaden the responses."

"We call these heterologous prime-boost" vaccinations, she said, adding that such a strategy has been used to fight other diseases like Ebola.

Many immunologists believe that a strong immune response to the mix-and-match strategy is "entirely predictable from the basic immunology," she said.

Preliminary results from a Spanish study on mixing and matching vaccines in May suggested that giving Pfizer shots to those who have received AstraZeneca was safe and effective. A U.K. study produced similar findings.

What about third "booster" shots?

The decision came amid growing anxiety over the efficacy of Chinese vaccines, especially against the delta variant, after reports that a nurse who had received two Sinovac doses died of COVID-19.

Doubts over Chinese vaccines are growing in Indonesia, too, where there have also been reports of vaccinated medical professionals falling ill with COVID-19 and in some cases dying. Sinovac accounts for nearly 85% of all vaccine supplies in the archipelago and most inoculations of health workers. 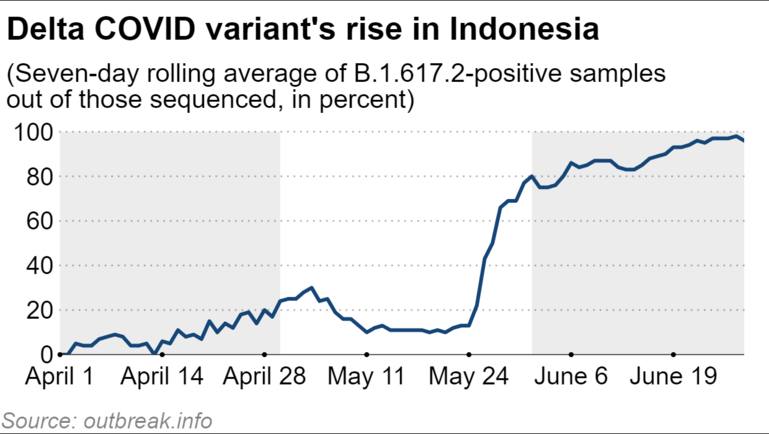 On July 9, Indonesian authorities decided to give U.S.-donated Moderna jabs as third booster shots to 1.47 million health personnel. "Indeed, there are indications that the Sinovac vaccine does not provide protection against the new COVID-19 variant," an official at the Health Ministry said, explaining the decision as the delta strain rages.

Additional protection for health workers is considered critical as the country fights an exponential surge in cases -- daily new infections were below 10,000 in mid-June but have surpassed 50,000. "Hospital overcapacity in almost all provinces makes health workers more vulnerable to COVID-19, because they are always in an environment that is highly contagious," the official said. "One of the preventive measures that can be done immediately is providing booster vaccines for health workers."

What is the prevailing view on booster shots?

The administration of booster shots has stirred debate over vaccine equity, at a time when many in Asia and around the world are still awaiting their first doses.

The director general of the World Health Organization, Tedros Adhanom Ghebreyesus, recently said that regular vaccination "offers long-lasting immunity against severe and deadly COVID-19" and that "the priority now must be to vaccinate those who have received no doses and protection."

Only 5.9% of Indonesia's population has been "fully" vaccinated with two shots as of Saturday, according to Our World in Data.

But local experts have welcomed Indonesia's decision. "It's natural that the priority is given to these health workers," said I Gusti Ngurah Kade Mahardika, virology professor at Udayana University in Bali. "The strategy of using a different vaccine ... is also quite wise, by differentiating the allocation for the general public who can be given vaccines with more supply, such as Sinovac." A student receives a coronavirus vaccine in Makassar, in Indonesia's South Sulawesi Province, on July 14.   © Antara Foto via Reuters

Daeng Faqih, chairman of the Indonesia Doctors Association, said on local TV that because virus antibodies tend to decrease around six months after being vaccinated, a booster shot is needed. "Health workers can be three times more likely to be infected, because of their duties," he said. "So boosters are important and if possible [should be] given regularly so that health workers do not get sick easily."

Atsmosukarto of Lipotek said that while "it is premature" for Indonesia to implement a booster shot strategy to the general population, the country "should use the rollout to health care workers as an opportunity to gather robust data to inform us on what to do with the general population when we have reached the target [vaccination] coverage."

Elsewhere, Singapore's health minister reportedly floated the idea, saying that if booster shots are needed, they could begin around Chinese New Year next February.

Where else are vaccine strategies changing?

Several countries have already adopted, or have signaled a willingness to adopt, a mixed-shot strategy.

In Asia, Bhutan's Prime Minister Lotay Tshering reportedly said in late June that he had "no problem" with mixing and matching vaccines. South Korea decided in mid-June that nearly 800,000 Koreans who had a first dose of AstraZeneca will be offered Pfizer vaccines as a second dose due to shipment delays under the COVAX global vaccine sharing scheme.

Canada has embraced mixing and matching under guidance from its National Advisory Committee on Immunization, which has suggested a Pfizer-AstraZeneca combo may be more effective. Canada's public broadcaster reported last Friday that the government wants other countries that have not approved mixing to recognize Canadians with different doses as fully vaccinated.

As for boosters, Israel earlier this month began giving third Pfizer doses to severely immunocompromised adults. Turkey, Bahrain and the United Arab Emirates have all reportedly administered third doses after two Chinese shots. And Pfizer itself is eyeing a regulator recommendation for extra doses.