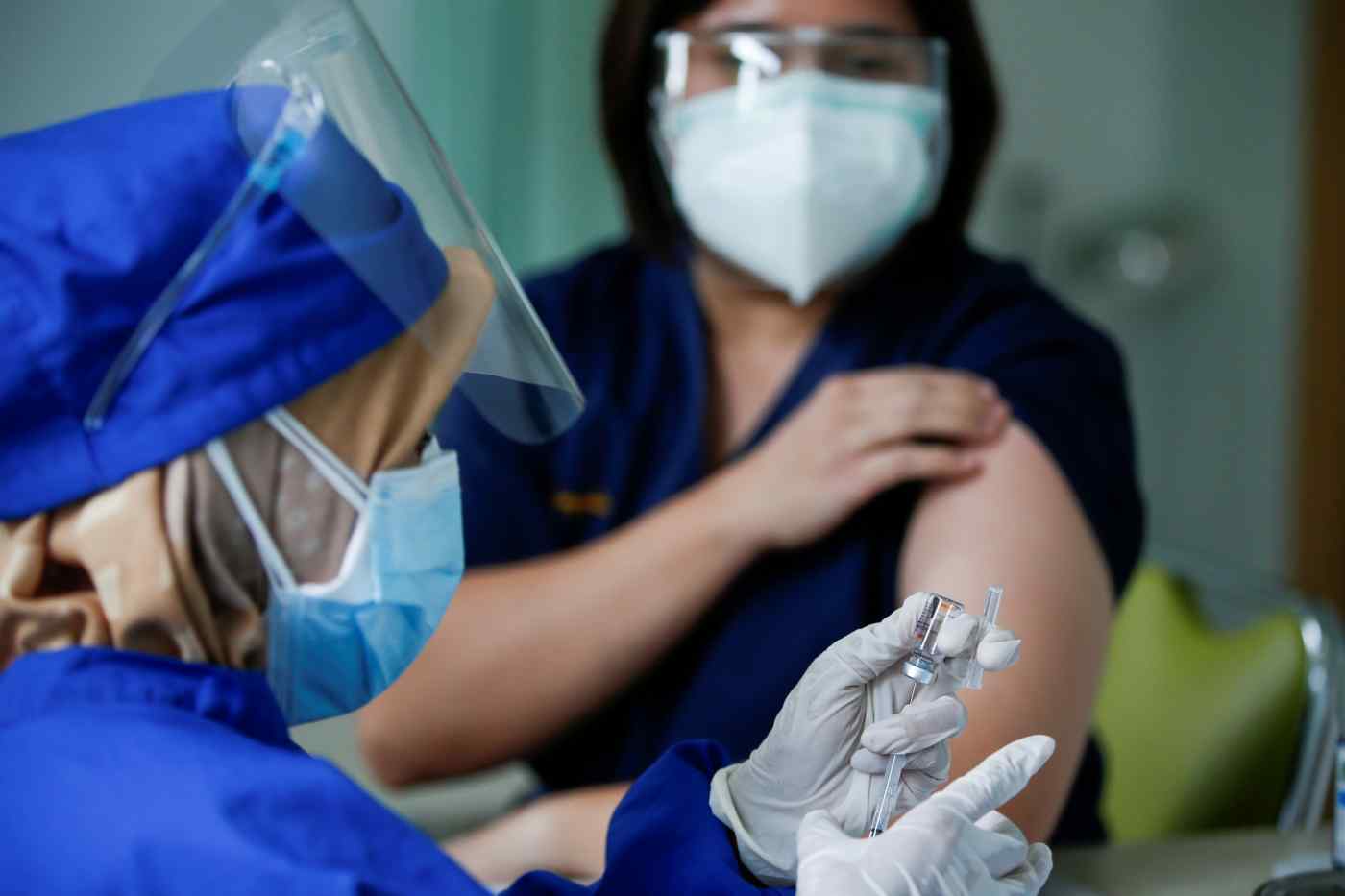 JAKARTA (Reuters) -- More than 350 Indonesian doctors have contracted COVID-19 despite being vaccinated with Sinovac, and dozens have been hospitalized, officials said, as concerns rise about the efficacy of some vaccines against more virulent virus strains.

Most of the doctors were asymptomatic and self-isolating at home, said Badai Ismoyo, head of the Kudus district health office in Central Java, but dozens were in hospital with high fevers and declining oxygen saturation levels.

Kudus is battling an outbreak believed to be driven by the more transmissible Delta variant which has pushed bed occupancy rates above 90% in the district.

Designated as a priority group, Indonesian health care workers were among the first to be vaccinated when the inoculation drive started in January.

Almost all have received the COVID-19 vaccine developed by Chinese biopharmaceutical company Sinovac, according to the Indonesian Medical Association (IDI).

While the number of Indonesian health care workers dying from COVID-19 has decreased significantly -- dropping from 158 deaths this January to 13 this May, according to data initiative group LaporCOVID-19 -- public health experts say the Java hospitalizations are cause for concern.

"The data shows they have the Delta variant [in Kudus] so it is no surprise that the breakthrough infection is higher than before because as we know the majority of health care workers in Indonesia got Sinovac, and we still don't know yet how effective it is in the real world against the Delta variant," said Dicky Budiman, an epidemiologist from Australia's Griffith University.

A spokesperson from Sinovac and Indonesia's ministry of health were not immediately available for comment on the efficacy of Sinovac's CoronaVac against newer coronavirus variants.

Grappling with one of the worst outbreaks in Asia, with more than 1.9 million cases and 53,000 deaths, there has been a heavy toll on Indonesia's doctors and nurses with 946 deaths.

Many are now experiencing pandemic fatigue and taking an increasingly laissez-faire approach to health protocols after being vaccinated, said Lenny Ekawati, from LaporCOVID-19.

"That phenomenon happens quite often these days, not only within the community but also health care workers," she said, "They think because they are vaccinated that they are safe."

But as more cases of the highly transmissible Delta variant are identified in the world's fourth most populous nation, the data is starting to tell a different story.

Across Indonesia, at least five doctors and one nurse have died from COVID-19 despite being vaccinated, according to the data initiative group, although one had only received their first shot.

In Kudus, one senior doctor has died, said IDI, although it is understood he had a comorbidity.

In the Indonesian capital Jakarta, radiologist Dr Prijo Sidipratomo told Reuters he knew of at least half a dozen doctors in the city who had been hospitalized with COVID-19 in the past month despite being vaccinated, with one currently being treated in ICU.

"It is alarming for us because we cannot rely on vaccinations only," he said, urging people to strictly adhere to health protocols.

Weeks after the Muslim Eid Al-Fitr holidays, Indonesia has experienced a surge in cases, with the positivity rate exceeding 23% on Wednesday and daily cases nearing 10,000, the highest since late February.

In its latest situation report the World Health Organization called for Indonesia to implement a stricter lockdown with increased transmission due to variants of concern and a "drastic increase in bed occupancy rates" necessitating urgent action.