Emerging countries push for a WTO-rule exemption amid surging infections VIENNA/WASHINGTON -- Facing pressure amid renewed surges in coronavirus cases in India and other emerging countries, the U.S. has begun considering loosening vaccine patent protections to increase global access to the shots.

Many emerging economies are calling for a temporary exemption to the World Trade Organization's vaccine patent rules in order to increase vaccine production. But pharmaceutical and biotech companies have pushed back against the idea, warning it could put sensitive technologies in the hands of overseas rivals.

"Our focus is on maximizing production and supply for the world at the lowest possible cost," White House press secretary Jen Psaki said in an April 27 briefing, "and there are a lot of different ways to do that." Waiving vaccine patents is "one of the ways."

Options reportedly being considered by President Joe Biden's administration include boosting American production of vaccines or asking pharmaceutical companies to waive patents and allow overseas production. U.S. Trade Representative Katherine Tai has met with top executives from Pfizer and other vaccine producers to discuss the issue.

In the meantime, the U.S. has decided to ship 60 million doses of the AstraZeneca vaccine overseas.

The U.S. faces growing criticism at home and abroad for controlling much of the vaccine supply. Officials in Washington are also alarmed by China and Russia expanding their clout by distributing homegrown vaccines to hard-hit countries.

Tedros Adhanom Ghebreyesus, the World Health Organization's director-general, stressed the importance of greater vaccine access around the world during a news conference Monday. Just 0.3% of the over 1 billion doses administered worldwide have been given in poor nations, according to the WHO. 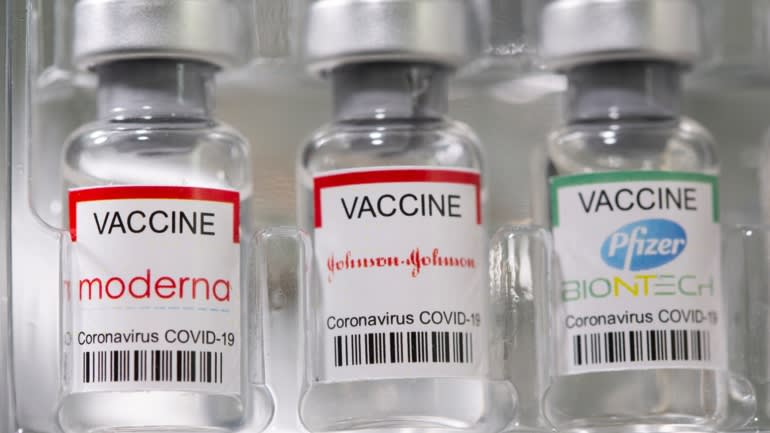 Many countries, led by India and South Africa, are pushing a proposal to waive the World Trade Organization's intellectual property rules to increase global vaccine production. Even as some 30% of Americans are fully vaccinated, less than 2% of Indians are.   © Reuters

Patents are protected under the WTO's Agreement on Trade-Related Aspects of Intellectual Property Rights, or TRIPS. India and South Africa seek to temporarily exempt COVID-19 vaccines from TRIPS rules so countries can freely produce shots they need. Roughly 100 countries, many of them developing economies, support the proposal.

Yet vaccine makers have warned U.S. authorities that a waiver could give China and Russia access to novel technologies, the Financial Times reported. Japan and Europe, homes to many pharmaceutical companies, also worry that a waiver could discourage new research.

Some opponents argue that intellectual property rights are not the factor hampering the global vaccine rollout.

"The bottlenecks are the capacity, the scarcity of raw materials, scarcity of ingredients, and it is about the know-how," Thomas Cueni, director general of the International Federation of Pharmaceutical Manufacturers and Associations, said last month. Producing safe and effective vaccines requires seasoned experts and specialized facilities, both of which cost time and money.