NEW DELHI -- The government of Prime Minister Narendra Modi on Monday began no-cost COVID-19 vaccinations for all citizens over 18 years old -- about 940 million people. It also took over vaccine procurement from the states, which had been struggling to arrange doses for their own vaccination programs.

"From today, people aged 18 and above will get free vaccine under the Indian government campaign and the speed of the vaccination will also increase," Home Minister Amit Shah said during his visit to the western state of Gujarat. "It is a very big decision considering the huge population of the country," he said, appealing to the citizens to get their jabs as soon as possible.

India, a country of over 1.3 billion people, has set a target of vaccinating all of its adult population by the end of December. It is using two locally made vaccines -- Covishield, supplied elsewhere under the AstraZeneca label and manufactured by the Serum Institute of India; and Covaxin, developed by Indian drugmaker Bharat Biotech. Russia's Sputnik V vaccine has also been approved for emergency use.

"Whether it is poor, lower middle class, middle class, or upper class, only the free vaccines will be administered in the government of India campaign," Modi said earlier this month while announcing the new vaccination policy.

On the occasion of International Yoga Day on Monday, the prime minister underlined the importance of practicing yoga during the pandemic. "When the whole world is fighting the COVID-19 pandemic, yoga has become a ray of hope," he said. "When I talk to front-line warriors and doctors, they tell me that they have made yoga a protection shield against the coronavirus."

As part of the previous policy, the federal government provided free vaccines to front-line workers such as doctors, nurses and police personnel, along with citizens over age 45, while state governments were to buy shots on their own for people in the 18-44 age group. Many states had wanted to give free jabs to the 18-44 age group.

The federal government was procuring 50% of the total vaccines manufactured in India, while state governments and private hospitals were meant to secure 25% each. State governments had to compete with each other to get vaccines from manufacturers. They were also unhappy about the pricing. 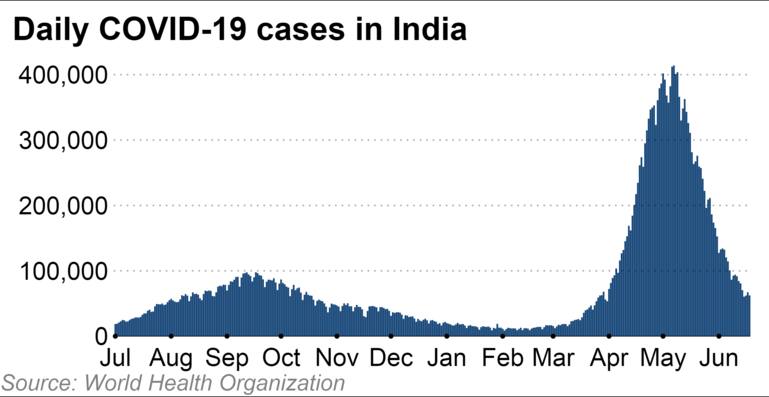 Now, under the revised policy, the Modi government has taken over the state-level procurement, which means it will buy 75% of the total doses produced locally and give them to states free of charge to vaccinate eligible people in all age groups.

"Those who do not want to get the vaccine for free [at government facilities] and want to get [it administered] at a private hospital have also been taken care of," Modi said on June 7, adding that the private hospitals will continue to procure 25% of the doses. However, those facilities can levy the maximum service charge of only 150 rupees per shot over the cost at which they procure the vaccine from manufacturers.

Private hospitals are buying vaccine doses at prices set by each manufacturer -- 600 rupees per dose for Covishield, 1,200 rupees for Covaxin and 948 rupees for Sputnik V.

The new vaccination guidelines "will lead to streamlining of the system ... and are expected to speed up the inoculation drive," India's top COVID-19 adviser V.K. Paul told a media briefing on Friday.

As of Friday, a total of 220.4 million people in India had received the first dose of the two-shot vaccine, while 50.3 million had received both doses.

Experts feel the revised vaccination policy will bring about uniformity in the system. "The centralized policy will lead to equitable distribution of vaccines nationwide now, which will benefit a large number of people," Rajinder K. Dhamija, head of the neurology department at Lady Hardinge Medical College and former WHO fellow at the National Institute of Epidemiology, told Nikkei Asia.

The new policy comes at a time when daily cases in India have dropped sharply, leading to easing of the lockdown restrictions. People have started thronging markets and train stations again and many can be seen defying social distancing rules, triggering fears that the country could face another serious wave of the pandemic.

"As we are gradually relaxing restrictions and resuming activities, we need to be cautious, as ... the virus is still around," Lav Agarwal, joint secretary in the health ministry, said on Friday. He added that people should still stay indoors as much as possible and go out only when necessary as well as wear masks and follow social distancing guidelines.