NEW DELHI -- India next month is expected to begin inoculating 12- to 18-year-olds with a domestically developed COVID-19 vaccine that is also the world's first DNA-based anti-coronavirus jab.

The vaccine has received approval for emergency use among this age group and older people.

Ahmedabad-based producer Zydus Cadila's ZyCoV-D vaccine, developed in partnership with the Indian government's Department of Biotechnology, is administered in three needle-free doses. It showed primary efficacy of 66.6% for symptomatic COVID cases, according to interim results from the vaccine's Phase-III clinical trials conducted among over 28,000 volunteers.

The company, which got the drug regulator's nod for ZyCoV-D on Aug. 20, plans to produce 100 million to 120 million doses annually.

India has now approved six COVID vaccines for emergency use. The five others are: Covishield, the local name of the AstraZeneca vaccine domestically produced by the Serum Institute of India; Covaxin, another indigenously developed jab; Russia's Sputnik V; and shots from U.S.-based Moderna and Johnson & Johnson.

The country of over 1.3 billion has been mainly using the two-dose Covishield and Covaxin vaccines since beginning its inoculation drive on Jan. 16. As of Tuesday, over 52% of its adult population of 944 million had received at least one dose while 15.6% had received two. 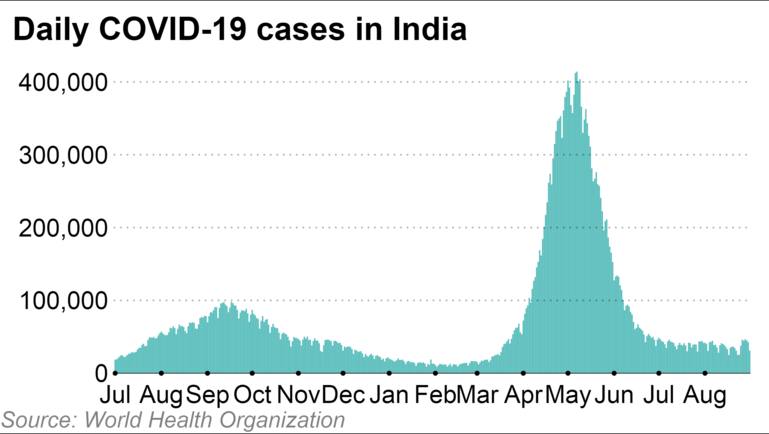 India is the world's second-worst-hit nation after the U.S., having reported over 32.8 million cases and 439,020 deaths as of Wednesday. In early May, at the height of the still-dangerous second COVID wave, more than 400,000 new infections were being confirmed every day, driven mainly by the delta variant. That was far higher than the single-day peak of 97,000 new infections that hit the country last September.

In recent weeks, fewer than 50,000 new cases have been surfacing each day.

With ZyCov-D, India now has its first COVID vaccine for its 120 million 12- to 18-year-olds. This is expected to benefit older children as schools gradually reopen after a nearly 18-month shutdown.

ZyCoV-D is administered with a needle-free applicator that ensures painless, intradermal vaccine delivery. The second dose is to be given 28 days after the first, and the third follows four weeks after the second.

"This is for the first time that a technologically advanced vaccine has been successfully developed on the plasmid DNA platform for human use," a company statement says. "The platform because of its rapid plug and play technology can be easily adapted to deal with mutations in the virus, such as those already occurring."

Plasmids are small, circular pieces of DNA usually found in bacteria that contain genetic information. Built on this platform, the ZyCoV-D vaccine produces the antigen or spike protein of the SARS-CoV-2 virus which causes the disease and elicits an immune response, protecting from illness and helping in viral clearance.

Rajesh Bhushan, India's health secretary, told a media briefing last week that the vaccine is expected to become available in the first week of October. "We are in talks" with the vaccine manufacturing company on crystallizing the terms and conditions of procurement, he said.

Even though it is "a good vaccine" and the only one available for the 12-18 age group, its three-dose regimen could be a logistical challenge for India, according to Arun Gupta, a pediatrician and president of the Delhi Medical Council. People wait for a shot of Covaxin at an under-construction flyover in New Delhi on Aug. 31.   © Reuters

"I'm very skeptical about the three-dose schedule, especially in rural areas where people don't realize the importance of vaccination much," he told Nikkei Asia. "You have to counsel these people [repeatedly] and push them to vaccination centers. It may not be easy to bring them back for the second and then [especially] for the third dose."

At the same time, he said India needs to expedite the vaccinating of its adult population, which will indirectly protect children too. "The number of adults who have been fully inoculated is dismal," he added, despite the country having launched its vaccination drive in mid-January.

Meanwhile, the government has warned that the second COVID wave has not left. "We are still in the midst of the second surge of COVID-19 in our country [and] therefore, we have to maintain all necessary precautions," Bhushan said, adding the months of September and October -- when India will be celebrating some festivals -- are crucial considering how cases spike after every festival.