Country seeks to inoculate 80%, or all who want shots, by November TOKYO -- Japan looks to provide COVID-19 inoculations to everyone who wants the shots by October or November, reaching a vaccination rate of about 80%.

The target appears well within reach as more than 50% of the population has received both doses of a vaccine while over 60% has received at least one dose, according to the government.

The government also will ease restrictions imposed on certain activities as the vaccination rate rises.

A number of other major developed countries reached the 50% threshold in July and August. Japan, which lagged behind peers, ramped up vaccination efforts and is close to the 53% mark reported in the U.S.

Over 144 million doses have been administered, the prime minister's office said Monday, an increase of about 2.8 million from Friday.

A total of 64.4 million people have received two doses -- crossing the 50% threshold for the first time. About 79.8 million in Japan have received at least one shot, or 63% of the population. 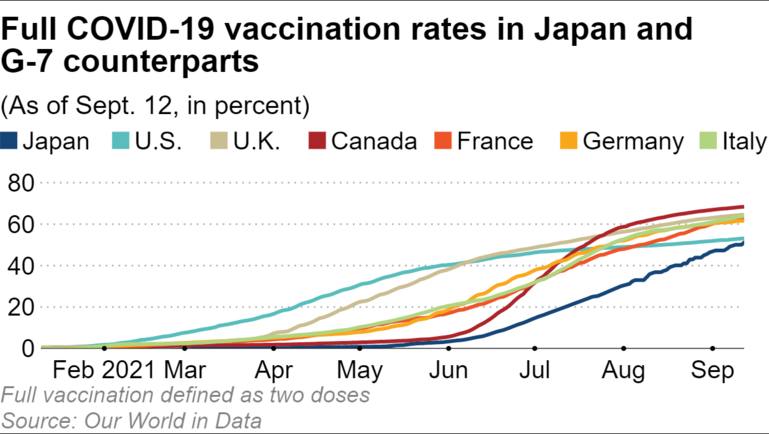 Those 65 and older have received priority, so vaccination rates in that age group are high. The proportion of seniors who have been given at least one dose totaled 89.7%, and 88% have received two.

The health ministry estimates that the vaccine rollout prevented the deaths of more than 8,000 people in that age range during the fifth wave of COVID-19 infections that occurred in July and August.

Vaccines are being administered at a rate surpassing 1 million doses a day. Government-run vaccination centers and private workplaces have played a major role in pushing the inoculation drive.

The final vaccination rates of people 12 and older will average around 88% across the country, according to projections by all 47 prefectures. The ratio would amount to roughly 80% of the population.

European countries and the U.S. have faced resistance from those who shun vaccinations when their inoculation rate tops 50%-60%. If Japanese vaccinations continue at the current pace, the country will surpass that wall and approach 80% in November.

The benefits of the mass vaccination drive are already evident. Only 4.5 per 100,000 fully vaccinated people contracted new coronavirus infections during the first three days of September. This compares with 59.9 per 100,000 among Japan's unvaccinated population.

The government said Thursday that it would roll back restrictions in phases given the progress of the vaccine rollout. Proof of vaccination and negative COVID tests will be used to relax constraints on restaurant operating hours. Japan intends to let eateries serve alcohol and ease limits on large numbers of people dining together.

Still, experts urge caution. Some data has shown that vaccinations lose effectiveness over time, and the government is preparing to roll out booster shots.

"Even assuming that everyone who wants the vaccines becomes fully vaccinated, attaining herd immunity in a way that protects society as a whole will be a challenge," the government's Subcommittee on Novel Coronavirus Disease Control said in a Sept. 3 recommendation.