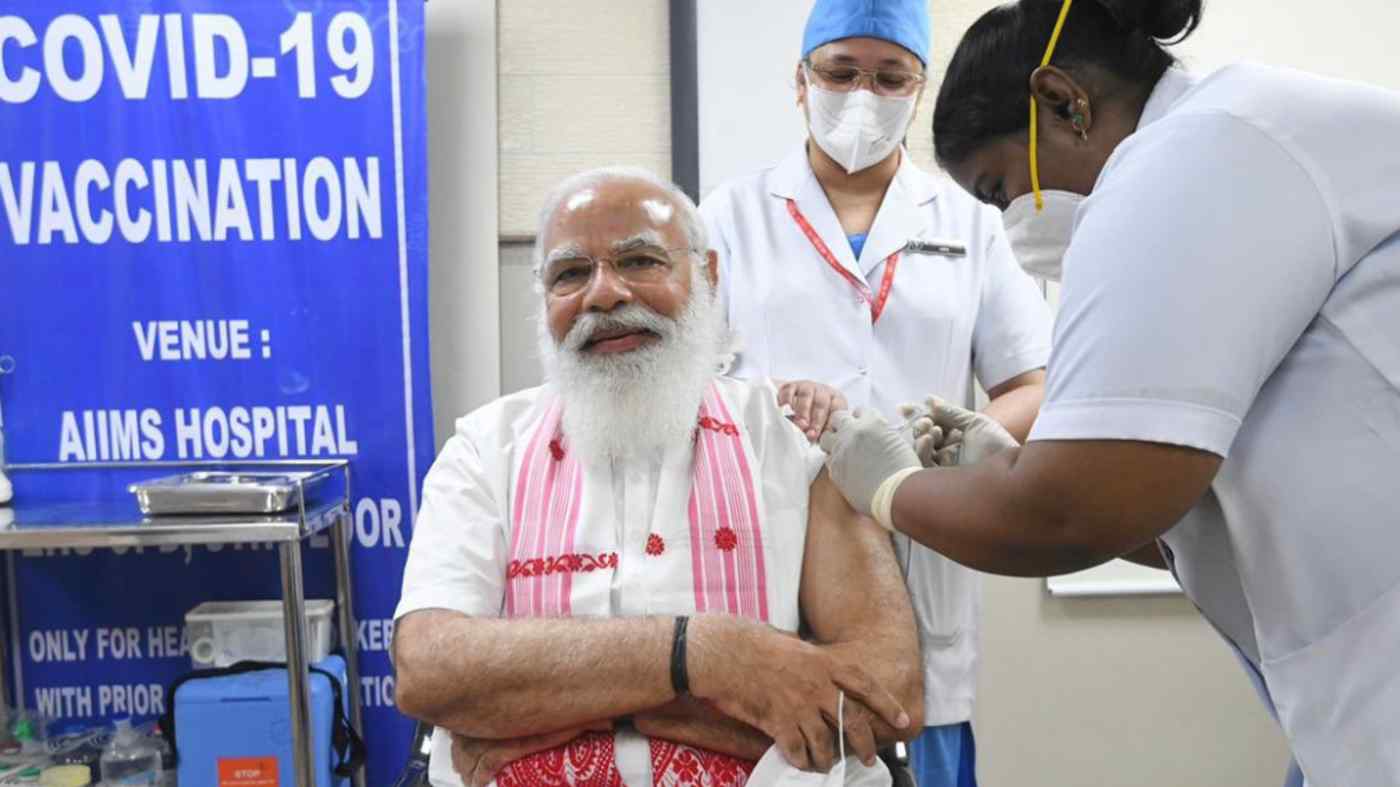 Indian Prime Minister Narendra Modi receives his first dose of a COVID-19 vaccine on March 1 at the All India Institute of Medical Sciences in New Delhi, urging those who are reluctant to get inoculated. (Screenshot from Narendra Modi's Twitter page)
KIRAN SHARMA, Nikkei staff writerMarch 1, 2021 13:19 JST | India
CopyCopied

NEW DELHI -- Prime Minister Narendra Modi on Monday took the first dose of the COVID-19 vaccine as India began inoculating people over the age of 60, and those over 45 with existing health conditions.

The country has begun the second round of a massive vaccination drive, which kicked off in January with jabs for health care and front-line workers.

Modi, 70, who was vaccinated at the All India Institute of Medical Sciences in New Delhi, tweeted a photo of himself receiving the jab. "Remarkable how our doctors and scientists have worked in quick time to strengthen the global fight against COVID-19," he said. "I appeal to all those who are eligible to take the vaccine. Together, let us make India COVID-19 free!"

The vaccination push comes amid a rise in cases in some states, such as western Maharashtra, including India's financial hub, Mumbai, following a steady decline in infections nationwide after mid-September. The federal government has cautioned these states that "any laxity in implementing stringent measures to curb the spread, especially in view of new [strains] of [the] virus observed in certain countries, could compound the situation."

Amid fears of a second wave of infections, Maharashtra, with a population of more than 110 million, has imposed nighttime curfews in some districts. In Mumbai, all religious, political and social gatherings have been banned to curb the spike in cases. With a caseload of over 11 million, including more than 157,000 deaths, India is the world's second-most affected nation by the pandemic, after the U.S. On Feb. 23, the government confirmed the presence of two new variants of the virus -- N440K and E484Q -- in Maharashtra and the southern state of Kerala, but said there was no reason to believe these were responsible for the upsurge of infections in the two states. It also said the two strains had been detected in other countries and were not specific to India.

Apart from these two variants, India has reported the presence of the U.K., Brazilian and South African strains.

The second phase of the inoculation program will be conducted at 10,000 government facilities, with people receiving shots free of charge, and at 20,000 private hospitals where a fee will be charged. Beneficiaries in round two include around 100 million people over age 60, and people over age 45 with comorbidities such as diabetes and cardiovascular disease. 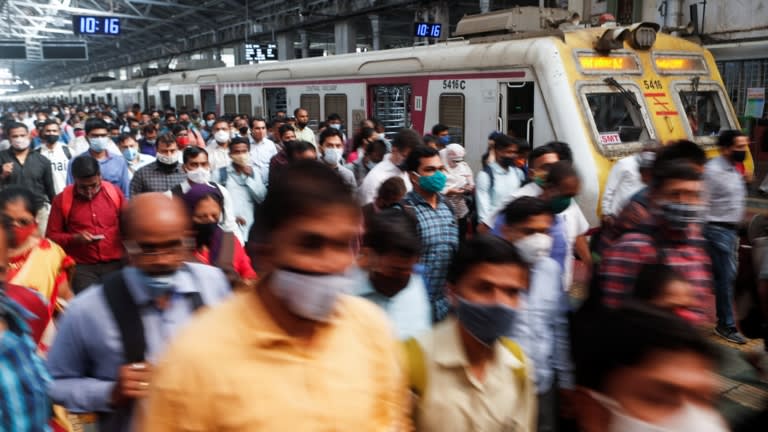 Masked commuters walk on a railway platform in Mumbai on Feb. 9: India's financial capital has recently seen a rise in COVID-19 infections.   © Reuters

The government had earlier said it would inoculate people over age 50, along with anyone with comorbidities in the second phase, with the aim of covering 300 million of the country's more than 1.3 billion people by August by the end of round two. But now it appears to be targeting those people who are at greater risk of contracting the infection first.

In the first phase, which began on Jan. 16, India aimed to vaccinate 30 million health care professionals, and front-line workers such as police and military personnel. However, by the end of February only about 11.84 million people had received at least one dose. Even though the government bore the entire cost of vaccination for health and front-line workers in the first round, the pace of inoculation was slower than expected, owing to factors such as people's reluctance to get the vaccine and technical glitches in Co-WIN, a digital platform for vaccine distribution.

Meanwhile, Dr. Reddy's Laboratories, which is conducting clinical trials of the Sputnik-V vaccine in India, recently sought emergency-use approval for the Russian vaccine in the country. If it is authorized, it would help India speed up the inoculation program.

Apart from vaccinating its own citizens, India has also been exporting locally manufactured doses. It has gifted as well as commercially supplied COVID vaccines to many countries, including Bangladesh, Myanmar, Nepal, Brazil and South Africa.

"We will continue to supply these vaccines [globally] in the coming weeks and months in a phased manner," Indian foreign ministry spokesperson Anurag Srivastava said at a media briefing, adding that decisions on these supplies will be calibrated with the requirements of India's vaccination program, which is the largest in the world.