Nation has Asia's highest rates of vaccinations and confirmed infections ULAANBAATAR -- Mongolia has administered more COVID-19 shots relative to its population than any country in Asia, yet this steppe nation lodged between China and Russia also leads Asia in proportional rankings for new COVID-19 cases.

Public health officials say the severity of the outbreak comes down to transmission by young people and other unvaccinated groups along with complacency after the country's initial successful containment of the virus. Compounded by the delta and other COVID-19 variants, these factors are considered more important than shortcomings in the Chinese vaccines that the country has mainly relied on.

Batbayar Ochirbat, an advisor to Mongolia's health minister, told Nikkei Asia: "Based on our analysis, we observed that Sinopharm reduced mortality by 94%, and was 74% effective for fully vaccinated people compared to those who received the first dose."

This time last year when much of the rest of the world was grappling with COVID-19 spikes and lockdowns, Mongolia had less then 1,000 cases in total and no real domestic outbreak. Even in April, when the country went into lockdown, daily cases never exceeded 1,400 and were relatively contained, mostly in the capital, Ulaanbaatar.

But now cases are in the hundreds even in remote areas. Daily COVID-19 infections have hovered between 1,500 and 2,500 since June, and surpassed 150,000 in total. The surge started in April when 30% of the country's population had been vaccinated. The high vaccination rate since has not stalled the outbreak.

For Mongolia, the way forward will revolve around booster vaccines. The government has yet to decide on which will be used, but Pfizer and Novavax are in contention.

The government had targeted vaccinating 60% of the population by the end of July, but this has slowed infection rates. Ulaanbaatar is now aiming for over 70% by September's end. 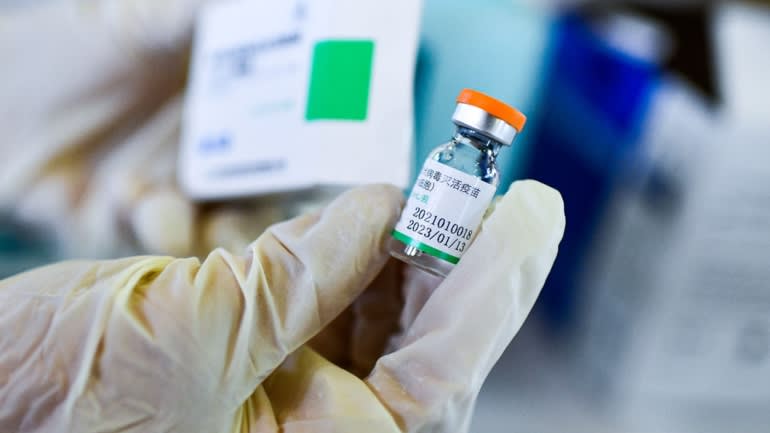 Mongolia received its first shipment of the Sinopharm vaccine in March. (Photo by Chadraa Chadraabal)

The Japanese government has promised Mongolia a $21.5 million grant to combat the pandemic, and the country expects to receive 2.35 million Pfizer doses by year's end. Since June 17, it has received 255,060 doses of Pfizer and begun vaccinating children aged from 12 to 17, women nursing infants and pregnant women.

According to health ministry reports, the country still has 1,175,214 doses in hand.

Ochirbat believes complacency also played its part. "After mass screening in February, people had a false sense of security," the health advisor told Nikkei. "People went out and celebrated the lunar new year [which started on Feb. 12], which gave us a high transmission rate."

In April, Mongolians were in lockdown to bring down infection rates, and the vaccination campaign really got into gear. "The lockdown was lifted too quickly in early May," said Ochirbat. "We opened all our businesses and allowed people to travel to the countryside. Finally, we had the presidential election [where] the outgoing president awarded around 16,000 people," who then mingled with families and friends afterward.

Chimedtseren was highly critical of February's mass screening. Mongolia's laboratories can handle around 8,000 tests per day, but that was ignored and samples were taken from up to 50,000 people per day. "Because our labs do not have the capability to test so many samples, some of the test results would sit for days and come back negative," he said. "Politicians sought brownie points and a quick return to normalcy, which in the end gave the public a false sense of security."

At the end of June, the health ministry confirmed that the COVID-19 alpha and delta variants have both been confirmed in Mongolia. The delta variants were mostly found in people who had recently been abroad.

Medicines used to treat COVID-19 can cost half the average monthly salary, and many who cannot afford them are infected medical workers. On June 23, the Mongolian Health Workers' Union sent an open letter to the government demanding that wages be at least doubled. In early July, some workers demonstrated outside the main government building.

Narantuya Chagnaa, the union's vice chair, told Nikkei that the government had not responded. "We can't have health care workers go through such harsh conditions and let them suffer."

Wages in the health sector are pitiful. Highly educated doctors make less than a million tugriks ($350), which is below the national average.

An oncologist who asked not to be identified was paid 150,000 tugriks for half a month's work in June after he contracted virus and had to isolate. "We can barely make ends meet, and I was punished for contracting the virus," he said.

A government official told Nikkei that the best scenarios would be to pay health care workers in red zones a one-off stipend of 2 million tugriks and half that for those working in less affected areas. "Health care workers are asking us to double their wages, but it is impossible in the 2021 budget," he said.

The government has been harshly criticized online by a vocal minority, and is losing popular respect as more lives are lost. There have been acts of open defiance. When a Japanese noodle shop, Takesan Miso Ramen, defied the order to close restaurants on the grounds that COVID-19 was unlikely to subside, long queues formed outside.

"We don't know when things will get better at this rate or how the virus is mutating and evolving," a government official to Nikkei, adding that the government and its national emergency committee are exploring ways to live with the virus while avoiding measures that harm the economy.