My experience of getting a Sinovac shot in Indonesia

My arm felt numb and weak, and I was still nauseous the following day JAKARTA -- After I rolled up a shirt sleeve, a nurse wiped my arm with an alcohol swab and delivered my first shot of Sinovac Biotech's COVID-19 vaccine.

It was over in a flash, and I felt no pain. But about five minutes later, the injection site began to ache and my left arm felt numb and weak. I started to feel sleepy, and I went home to take a nap. I could still carry out my daily tasks as the symptoms were mild, but I did feel drowsy all day.

I woke up the following morning feeling nauseous, and my arm was still numb. I felt better after taking medicine but it was unclear whether my queasiness was due to the vaccine. I feel back to normal now.

Indonesia, which the pandemic has hit harder than any other Southeast Asian nation, in January launched a mass inoculation campaign using the China-made vaccine. Senior government officials and health care workers got the first shots, but journalists were also designated as a priority group -- more than 5,500 who registered through the Indonesian Press Council were covered.

The first phase of shots for reporters took place from Feb. 25 to Feb. 27. I got my shot on the first day.

I received my government invitation in a phone message on Feb. 24. I was asked to go to Gelora Bung Karno Stadium in Jakarta, one of the venues for the 2018 Asian Games, at 8 a.m. On arrival, an attendant escorted me to a tent that was used as a waiting room. Some 500 people were already waiting on seats placed one meter apart.

When my name was called, I moved to another tent to receive a medical checkup and was asked if I had a history of heart disease, cancer, HIV or diabetes, which could make me ineligible to receive a shot.

To be vaccinated, a body temperature of less than 37 C and blood pressure between 90 mmHg and 140 mmHg are required.

My maximum blood pressure exceeded 160 mmHg, so I was asked to rest in the waiting room for 30 minutes. It fell to 138 mmHg.

Some people around me failed to meet the conditions and had their vaccinations postponed.

I passed the checkup and moved to the vaccination site on an adjacent basketball court. A sign with the slogan "Vaksin aman dan halal [Safe and halal vaccine]" was displayed. 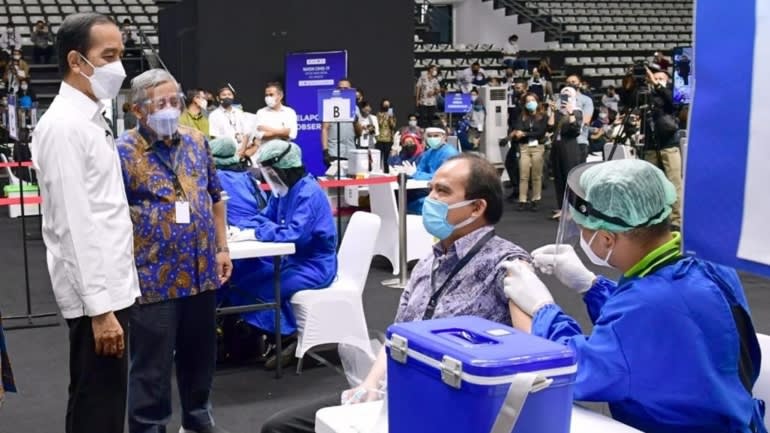 Indonesian President Joko Widodo observes the vaccination procedure at Bung Karno Stadium in Jakarta on Feb. 25. (Photo supplied by presidential secretariat of the Republic of Indonesia)

About 90% of Indonesia's population is Muslim. I am also one. The Chinese-made Sinovac vaccine acquired halal certification, which shows it complies with Islamic precepts.

Widodo aims to achieve herd immunity by inoculating about 180 million Indonesians, or 70% of the country's population, by the end of 2021. The country also plans to use the AstraZeneca vaccine and avail itself to the COVAX international vaccine procurement and supply scheme.

Let's see how I feel after my second shot on Thursday.