No jab, no entry: Singapore highlights rise of vaccine mandates 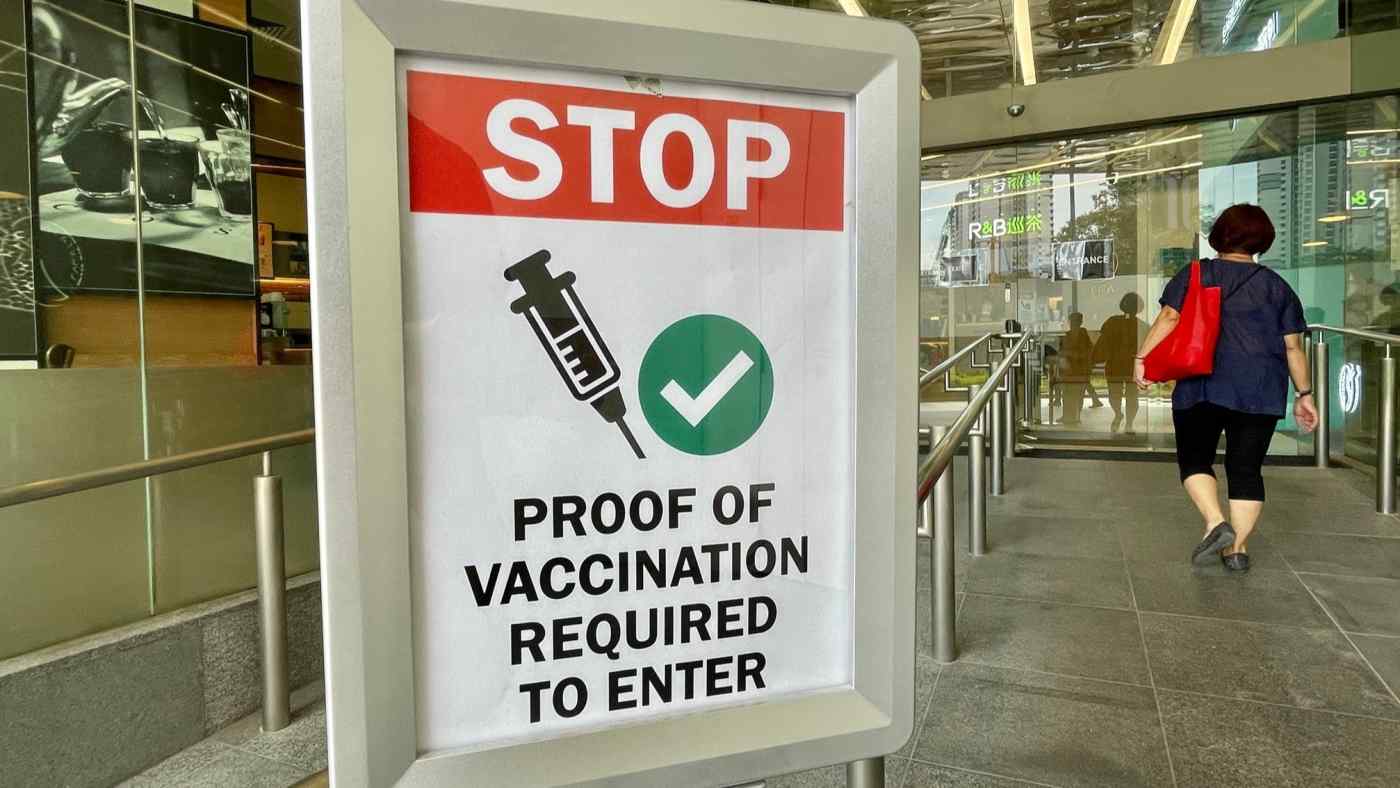 SINGAPORE -- Rules demanding proof of coronavirus jabs to enter places such as shopping malls and offices have sprung up in Singapore and other parts of Asia in the wake of rising vaccination rates, as authorities push to get their economies back on track while fighting infections.

Singapore on Wednesday banned unvaccinated people from entering malls and large stand-alone stores. The rule is meant "to protect unvaccinated individuals and reduce the strain on our health care system," the government said as it announced the plan last week, noting malls had been identified as relatively high-risk locations.

Some Western jurisdictions introduced vaccine mandates months ago, after their inoculation programs picked up pace. Now that over half Asia's population has received at least one dose -- doubling over the past three months -- the trend is spreading to the region, from offices to restaurants and even trains.

As the rule kicked in at Singapore's malls on Wednesday, one shopping center in the heart of the city-state was using a digital reader to scan the government's official virus tracing app on customers' phones. Visitors opened the app and held their phones close to the device to confirm their vaccination record. At another mall, staff were checking the app manually.

Businesses have a one-week grace period to adjust, through next Tuesday, and authorities have not said how long the vaccine requirement will remain in place. Exceptions to the rule include medical and child care facilities inside malls, along with large stand-alone supermarkets.

Singapore had already started what it called "vaccination-differentiated safe management measures" at restaurants in August, with only fully vaccinated people allowed to dine in. Effective Wednesday, the government extended the rules to "hawker center" food courts.

The tighter rules come as Singapore battles to stop a significant resurgence in COVID-19 infections, despite reaching an 80% full vaccination rate in late August. Cases continue to hit around 3,000 a day, though most are mild. Insisting on vaccinations to access some public spaces is seen as a way to avoid a sweeping lockdown.

"Let us go about our daily activities as normally as possible, taking necessary precautions and complying with safe management measures," Prime Minister Lee Hsien Loong said in a televised speech last Saturday. "With vaccinations, COVID-19 has become a treatable, mild disease for most of us." A college student receives a coronavirus shot in Indonesia, where individuals now have to be vaccinated at least once to enter public places like malls and offices.   © Antara Foto/Rahmad via Reuters

Over in Indonesia, individuals now have to be vaccinated at least once to enter public places like malls and offices. They are checked via the government's official vaccination and mobility monitoring app. Foreign nationals vaccinated abroad can enter by showing a printout of the vaccine certificate they received, and the government is working to incorporate foreign-issued vaccine certificates into the app.

Malaysia's government said last month that all federal civil service staff must get vaccinated "to give people confidence and reassurance as well as ensure smooth service delivery to the people." About 98% of those workers have already had jabs, according to the Public Service Department, while the rest have until Nov. 1 to get them.

In India, some local governments are taking similar steps. On Oct. 8, the Delhi city government made it compulsory for its employees, including schoolteachers and health care workers, to get at least one vaccine by this Friday. They will not be allowed into their workplaces and will be treated as "on leave" until they comply.

Meanwhile, in the financial hub of Mumbai, only double-jabbed people are allowed to travel on local trains after showing a government-issued certificate as proof of complete immunization.

Over 73% of India's adults had received at least one dose as of Wednesday evening, while 29% were fully vaccinated.

Such rules are only feasible once inoculations are sufficiently widespread -- to avoid excluding too many people from basic services. As of Tuesday, 55% of Asia's people had been injected with at least one dose, while 39% had received two.

Restrictions also tend to be controversial. From Europe to Canada, the U.S. and Australia, protesters have taken to the streets against such measures. COVID-19 vaccine requirements tend to provoke protests, like this one in the U.S. state of Ohio.   © Reuters

Some provincial governments in China looked to stop people using public transport and entering sites like restaurants and supermarkets unless they are vaccinated. But a central government directive nixed such policies, following public complaints.

Nevertheless, many authorities see mandatory jabs as a key tool for adjusting to "living with COVID-19," as Singapore calls its strategy for treating the virus as endemic.

In Australia, the Northern Territory government on Wednesday announced what was reported to be the country's strictest vaccine mandate. Just about anyone who works in a job that involves dealing with people -- from hospitality to hairdressing -- must get at least one shot within a month or they will not be allowed to work. They could also be hit with fines of 5,000 Australian dollars ($3,700).

Michael Gunner, the territory's chief minister, said there would be "extremely narrow" exemptions, but only when people can show "medical evidence" of why they cannot be vaccinated. "Simply not wanting the vaccine, is not a reason," he said.