Pfizer wanted to negotiate with Suga, not vaccine czar Kono TOKYO -- On Saturday morning, as he was about to wrap up his short trip to Washington, Japanese Prime Minister Yoshihide Suga spoke with Pfizer CEO Albert Bourla by phone to request additional coronavirus vaccine.

The call was not universally welcomed in the government, where many were leery of the country's leader stepping in to negotiate directly.

But the gambit worked. Bourla said he wanted to coordinate closely with the Japanese government, and Japan is set to receive enough doses by the end of September to vaccinate all residents.

Indeed, Suga's involvement may have been necessary.

When Taro Kono, minister for regulatory reform and Suga's chosen point man for the vaccination campaign, went to talk with Pfizer back in January, he received an unexpected response, according to sources close to the minister: The company insisted on negotiating with Suga. 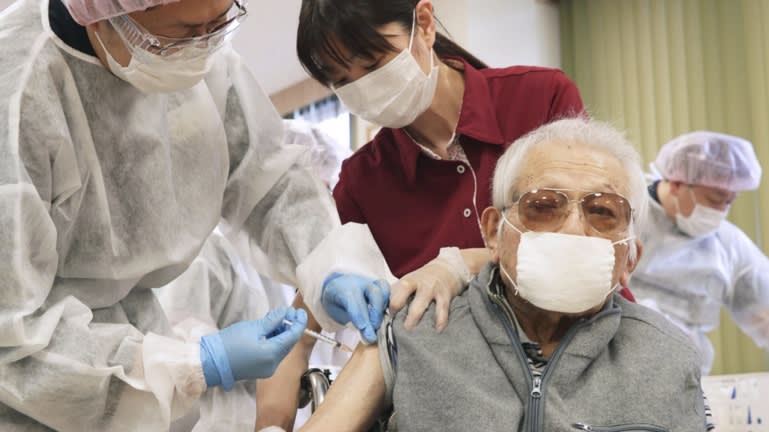 A vaccine is administered at a nursing home in Tokyo: Japan is set to receive enough doses by the end of September for all residents.   © Kyodo

The health ministry announced that month that Pfizer had signed a contract agreeing to make every effort to supply 144 million vaccine doses by year-end. But this was not an ironclad commitment, and Kono could not provide a clear timetable for how much vaccine would be delivered when.

Pfizer's insistence on going straight to the top did not come out of the blue. Last December, the prime minister's office, responding to Suga's frustration at the health ministry's lack of progress on securing vaccines, contacted Pfizer to negotiate directly -- a move that would under normal circumstances be a last resort.

By playing this card so early to compensate for the health ministry's failure, Tokyo weakened its position in the future.

Kono persisted in trying to work with Pfizer. In late February, with the company expanding European production, he announced that enough doses would be shipped throughout the country by the end of June to vaccinate everyone 65 and older.

While the supply side seems to be handled for the time being, Tokyo is still stumbling on a different hurdle -- European Union export controls.

The EU in January began requiring advance authorization for shipments of vaccines made in Europe, including at the Belgium-based Pfizer plant making Japan's allotment, to destinations outside the bloc.

Kono leveraged connections from his stint as foreign minister to urge the EU and the Belgian government to make an exception or grant bulk approvals for Japan. Ambassador to the EU Yasushi Masaki and Ambassador to Belgium Makita Shimokawa both previously served as high-level Foreign Ministry officials under Kono.

But despite these efforts, the restrictions still apply to Japan.

The vulnerability that comes from relying on foreign sources for the crucial vaccine has been made painfully clear to Kono, who has called repeatedly for the Japanese government to support domestic vaccine development and production.

"Supplying it would become so much easier," he says.