MANILA -- The Philippines began COVID-19 vaccinations on Monday using jabs donated by Beijing, giving the country's immunization program and diplomatic ties with China a shot in the arm.

The Philippines aims to immunize up to 70 million Filipinos this year, or over half the population. But the goal is under threat by low public confidence in vaccines -- especially those from China -- even as the country has the second-highest number of infections in Southeast Asia and one of the worst pandemic-induced recessions in the region.

"I am giving the guarantee that it is effective," Duterte said on Sunday. The 75-year-old leader, however, said his doctor did not endorse Sinovac after local regulators recommended it only for those aged 18 to 59. Philippine President Rodrigo Duterte holds a vial of Sinovac Biotech's CoronaVac as the first shipment of the COVID-19 vaccine arrives in the country on Feb. 28.   © Reuters

Duterte, accompanied by Cabinet members and Chinese Ambassador to the Philippines Huang Xilian, witnessed the arrival of 600,000 vaccine doses, which were airlifted by a Chinese military plane on Sunday.

But some in the Philippines worry that the Chinese donations may compromise the country's position on hot-button issues such as the South China Sea, where Manila and Beijing are locked in a territorial dispute. But Duterte dismissed those fears. 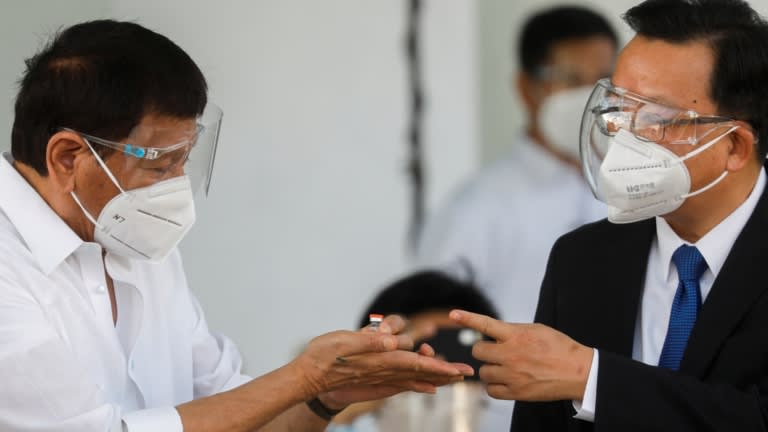 Duterte and Chinese Ambassador Huang Xilian examine a vial of Sinovac's vaccine at a ceremony marking the first shipment of the COVID-19 vaccine to the Philippines.   © Reuters

"China has been giving us everything but never asked anything from us actually," Duterte said, before railing against the U.S., which he said is "asking for a [military] base."

Duterte demanded in December that the U.S. deliver 20 million vaccines or he would halt the military Visiting Forces Agreement between the two defense allies. Manila and Washington are currently renegotiating the agreement.

The commencement of the Philippines' vaccination drive comes against a backdrop of public skepticism over the Chinese vaccines.

The physician's association of Philippine General Hospital on Saturday called for further evaluation of Sinovac's efficacy before administering it to health care workers. The association said 95% disapproved of the use of the Sinovac vaccine, citing an initial survey.

The Philippine FDA granted Sinovac an emergency use permit last week, but it did not recommend it for medical personnel exposed to COVID-19, citing the 50.4% efficacy rate for frontline medical workers in Brazil.

Health care workers were initially expecting Pfizer vaccines courtesy of the COVAX facility, but their arrival was delayed after manufacturers required an indemnification program, according to vaccine czar Carlito Galvez, a retired military general. 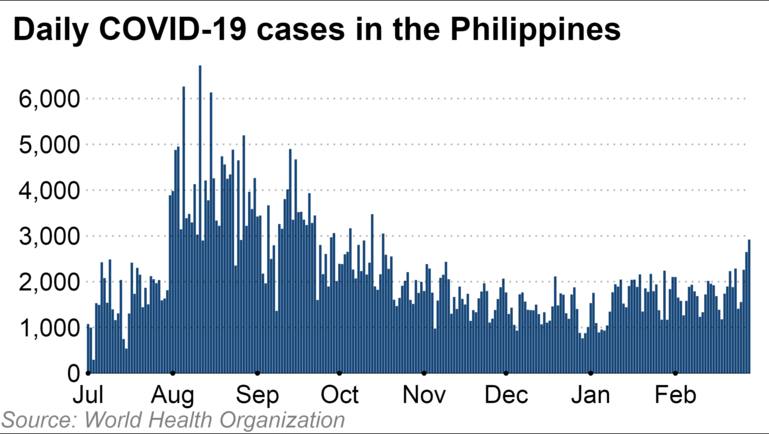 The wider Philippine public has also shown low confidence in vaccines in general. Only 18% of adult Filipinos were willing to be vaccinated, according to a recent survey of 1,200 people by OCTA Research. Meanwhile, only 13% trust Chinese vaccines, while 41% and 25% trust U.S. and U.K. vaccines, respectively.

"Those who don't want Sinovac, they can wait," Duterte said on Sunday.

The Philippines has moved to secure 148 million doses of vaccines from different sources, including 25 million doses from Sinovac, but delivery has faced delays. Over 500,000 doses of AtraZeneca vaccines were supposed to arrive on Monday, but delivery was postponed due to supply issues, Health Secretary Francisco Duque said.

The Philippines has recorded over 576,000 infections -- the highest in Southeast Asia after Indonesia -- with the last four days hitting over 2,000 daily cases. Meanwhile, over 12,000 have died.

Duterte said he may consider easing restrictions further once vaccinations hit the million mark to reopen an economy that contracted 9.5% last year, worsening unemployment and hunger.

"Our economy is really down, as in down," Duterte said on Sunday, adding he expects the country to return to normal "maybe in 2023."