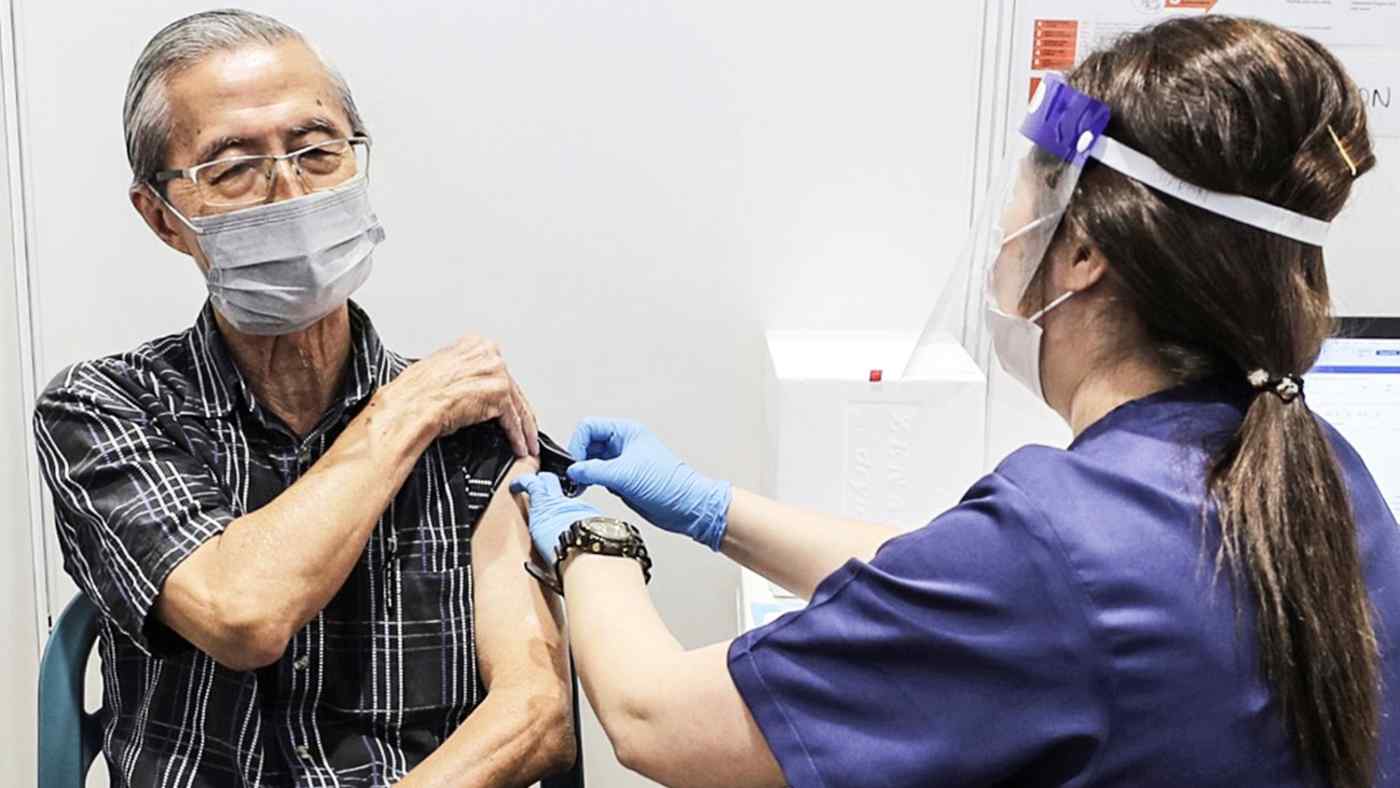 SINGAPORE -- Singapore kicked off a nationwide program for third coronavirus vaccine doses on Tuesday, as the country grapples with an infection resurgence despite over 80% of its population having had two jabs.

The move is a milestone in Asia's pandemic fight. While the city-state is not the first to offer at least some third shots, its status as a vaccination leader in the region means the program will be closely watched as several other Asian countries look to start boosters in October and beyond.

Starting Tuesday, Singapore's seniors over 60 years old and immunocompromised individuals can make an appointment for a third shot if they completed the second dose at least six months ago. "For those who are eligible for booster shots, please do so when you receive a notification," Trade Minister Gan Kim Yong, who co-chairs the government's coronavirus task force, said last Friday to encourage residents to get the supplementary jabs.

The government said about 200,000 seniors would be notified by text message first, with another 700,000 eligible seniors expected to take the extra dose in the coming months.

Singapore last December became one of the first Asian countries to introduce coronavirus vaccines, beginning with health care workers. In January, it started administering doses for seniors. An efficient rollout with the Pfizer-BioNTech and Moderna shots pushed the inoculation rate above 80% in late August, yet new infections have been trending sharply upward.

Daily confirmed cases topped 600 for the first time in 13 months on Monday.

Singapore's outbreak comes as authorities struggle to contain the more infectious delta variant while vaccinated residents increasingly go out for dining and other social activities. Thanks to the vaccines, authorities say 98% of new cases in the past month were asymptomatic or showed mild symptoms. But the number of patients in intensive care units or requiring oxygen -- the government's benchmark figure -- stood at 65 as of Monday, double the figure a week earlier.

The booster program is part of the effort to keep the critical numbers in check, alongside testing and safe distancing protocols. "If we are able to keep the number of deaths and ICU cases well under control despite the rising number of cases, we will be able to continue our opening journey more confidently," Gan stressed. 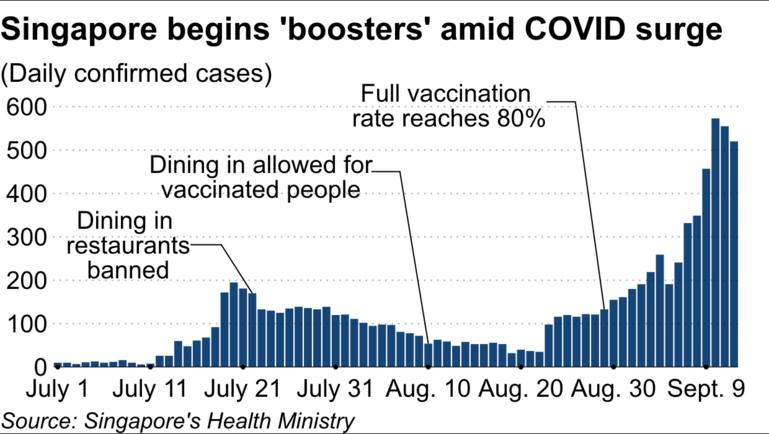 When it comes to securing supplies, Singapore expects to receive 500,000 Pfizer-BioNTech doses from Australia by the end of the year, under a swap arrangement in which the city agreed to send the same number of doses to Australia first.

But the booster program is beginning amid repeated World Health Organization pleas for rich countries to hold off on third shots, to ensure poorer nations have sufficient vaccine access. WHO Director-General Tedros Adhanom Ghebreyesus told media last week that he would "not stay silent when companies and countries that control the global supply of vaccines think the world's poor should be satisfied with leftovers."

A paper published in The Lancet medical journal on Monday by international vaccine experts, including two U.S. Food and Drug Administration officials who are stepping down this fall, also stressed that the regular two-shot vaccine regimens still provide strong protection against severe COVID-19. "Current evidence does not, therefore, appear to show a need for boosting in the general population, in which efficacy against severe disease remains high," they wrote.

Nevertheless, opposition to boosters has been largely ignored. Israel, France and other Western nations have already started administering or made plans for booster shots, citing indications that they are effective.

Singapore's launch is a sign of growing momentum in Asia, too.

In July, Indonesia began giving booster shots to health workers, using Moderna vaccines donated by the U.S. through the WHO's COVAX facility. In August, the Indonesian government said a third jab of China's Sinovac Biotech vaccine -- which makes up most doses administered in the country so far -- also counts as a booster. As of Sunday, 53% of Indonesia's nearly 1.5 million health workers had received their third doses.

Thailand intends to start giving boosters in October, mainly for people who had two Sinovac shots between March and May. South Korea is also considering third shots with either the Pfizer or Moderna vaccines next month, with an interval of six months from the second shot.

In China, booster shots are still under consideration, but authorities have placed border control and health care workers in a high-risk group considered prime candidates for extra shots. In Malaysia, the health minister recently said that the government is keen to explore boosters in light of waning immunity after two doses, but that the first priority is inoculating the unvaccinated. And in Japan, the head of the government's COVID-19 expert panel said Prime Minister Yoshihide Suga's successor should immediately consider boosters.

India, meanwhile, is studying the matter but remains noncommittal. V. K. Paul, the Indian government's top adviser on COVID-19, told reporters earlier this month that the question of whether boosters are needed remained "unsettled" globally.