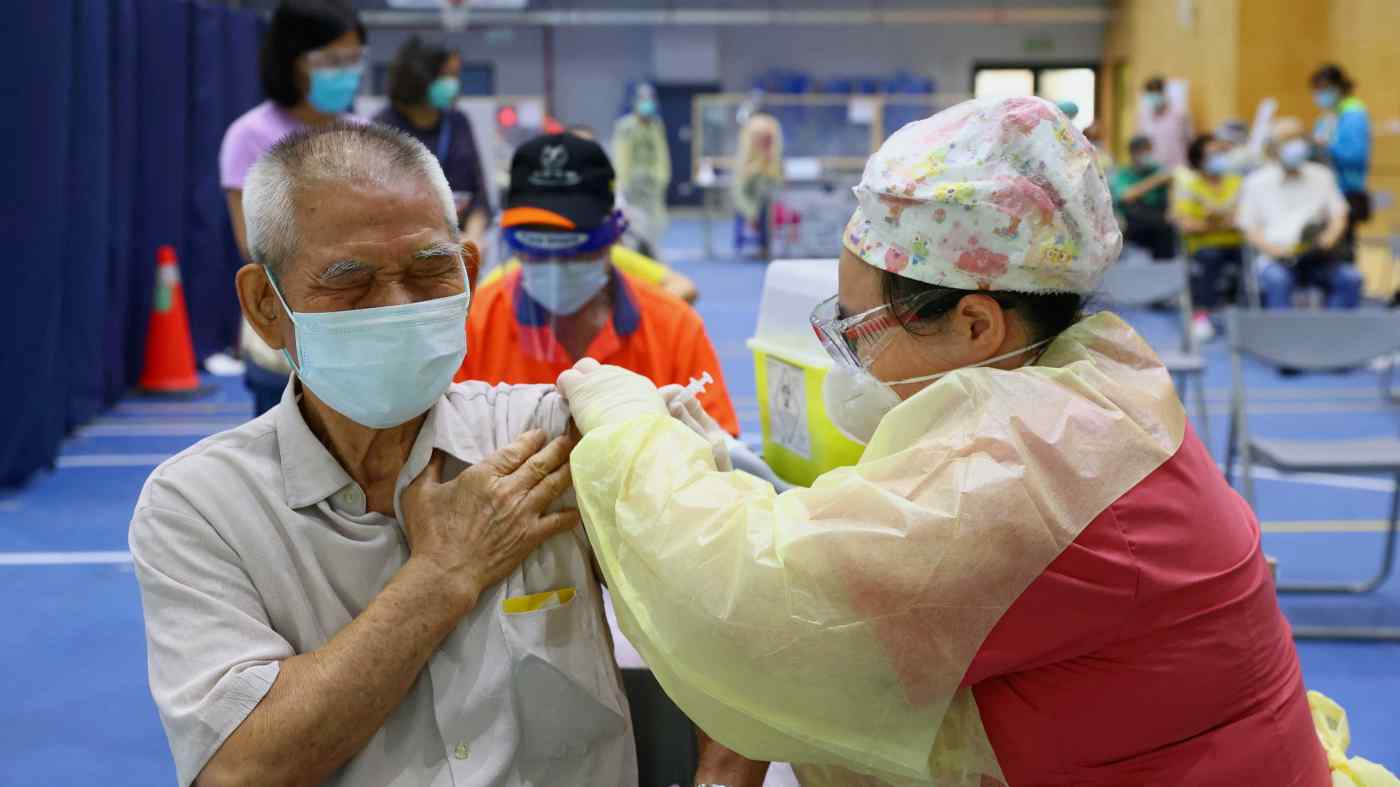 Taiwan has been struggling to ramp up the speed of its vaccination drive since a dramatic spike in local cases began in May.    © Reuters
LAULY LI and CHENG TING-FANG, Nikkei staff writersJuly 12, 2021 11:14 JSTUpdated on July 12, 2021 18:01 JST | Taiwan
CopyCopied

TAIPEI -- Taiwan has dispatched a top member of its COVID response team to Taiwan Semiconductor Manufacturing Co. as concern grows over a coronavirus outbreak at the world's largest chipmaker.

Wang Pi-sheng was sent to TSMC's Hsinchu base on Monday after the chipmaker reported three confirmed cases to Taipei, sources told Nikkei Asia.

The central government took over the COVID response at TSMC from the Hsinchu government the same day the possible cluster was announced, a sign of the chipmaker's importance to the global semiconductor industry. Wang previously helped chip testing company King Yuan Electronics to suppress the spread of a COVID cluster at its facilities.

"TSMC has a massive force of employees and the company is the most important chip supplier in Taiwan," Central Epidemic Command Center spokesperson Chuang Jen-hsiang told Nikkei Asia when asked why Wang was sent to the company so quickly.

TSMC told Nikkei Asia that it will conduct PCR tests on several hundred employees who have been in areas related to the three confirmed cases and said the incident has not affected the company's operations. TSMC declined to comment on Wang's arrival.

TSMC and Foxconn earlier on Monday announced they had signed $350 million worth of contracts to buy coronavirus vaccines from a Chinese distributor to help the government ramp up its inoculation drive amid a surge in local cases.

The companies will spend up to $175 million each to buy 10 million BioNTech vaccines that they will then donate to the government, according to stock exchange filings. Foxconn, which formally trades as Hon Hai Precision Industry, is the world's largest contract electronics manufacturer and a major iPhone assembler. Foxconn and TSMC are Taiwan's most valuable companies by market capitalization.

In a joint statement released later on Monday, the companies said the first batch of the vaccines will arrive from BioNTech's German factories around the end of September at the earliest. The vaccines will be made and labeled by the original manufacturer and will be shipped directly to Taiwan, in line with the Taipei's requirements, they added.

This marks the first deal by private companies to purchase vaccines since Taiwanese officials accused China of interfering in the government's procurement of jabs. Beijing, which views the island as part of its territory, denies the accusation.

"Since we proposed the vaccine donation and started negotiating for the purchase, there had been no guidance or interference from Beijing over the acquisition. We appreciate that the negotiation was allowed to go through as a business matter," Terry Gou, founder and former chairman of Foxconn, posted on his Facebook account early Monday morning.

Shanghai Fosun Pharmaceutical Group, whose subsidiary has a contract with BioNTech of Germany to sell its COVID-19 vaccines in China, Hong Kong, Macao and Taiwan, said in a stock exchange filing late on Sunday evening that its subsidiary has signed a sales agreement with TSMC, Foxconn, Foxconn's charitable Yonglin Foundation and cold-chain logistics provider Zuellig Pharma, their partner in the vaccine procurement effort, to sell a total of 10 million doses to the companies, with the understanding that the shots will be donated to the Taipei.