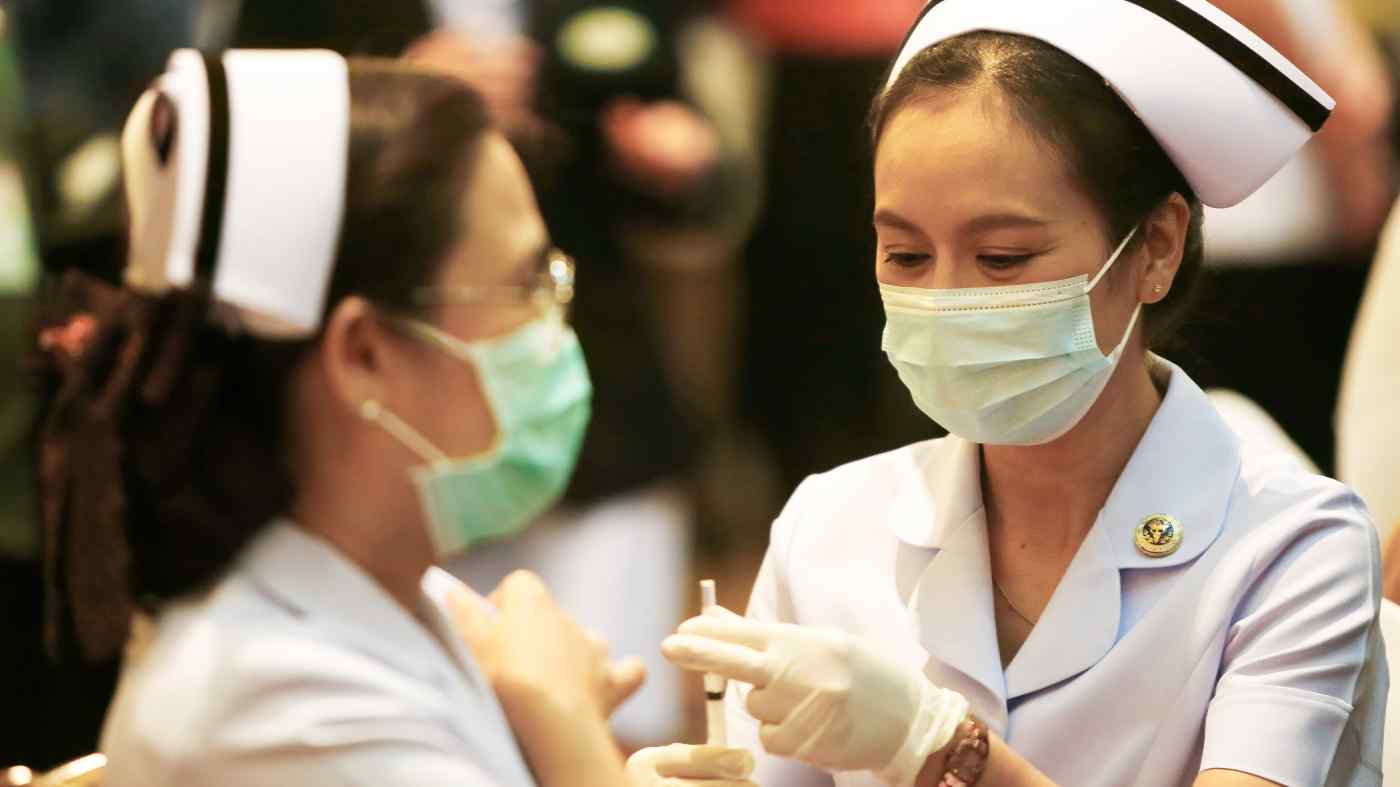 The Southeast Asian country had missed planned rollout dates including Feb. 14, Valentine's Day, and the inoculation of Prime Minister Prayuth Chan-ocha slated for Sunday morning was postponed due to "paperwork" issues.

Thailand has approved two vaccines so far, those from European pharmaceutical company AstraZeneca and China's Sinovac Biotech. The latter is only approved for people aged 18-59, which would exclude Prayuth, who turns 67 on March 21.

And while recent reports suggested that German Chancellor Angela Merkel had refused the vaccine, the issue instead was her age. "I am 66 years old, and I do not belong to the group recommended for AstraZeneca," she told the Frankfurter Allgemeine Zeitung newspaper.

Unlike Thailand, Germany has a powerful anti-vax protest lobby, and 1.6 million AstraZeneca doses there have gone unused. Thailand has only 117,000 hastily procured doses of AstraZeneca's vaccine and 200,000 from Sinovac, both of which were flown in last Wednesday.

Thailand has been credited for an outstanding performance containing COVID-19 despite a staggering economic cost, particularly after the country welcomed nearly 10 million Chinese tourists in 2019. At the end of February, the Health Ministry's Department of Disease Control reported 25,881 cases in total, with only 776 people remaining hospitalized and 83 deaths.

But after almost a year without local transmission, a second wave pushed the country back into lockdown in January and February. The peak day on Jan. 29 saw 1,732 cases confirmed. Ground zero for the outbreak was a fish market in Samut Sakhon outside Bangkok that employs many migrant workers from Myanmar. A major concern now is that another brutal crackdown on political demonstrations in Myanmar that could be in the offing will send thousands to the porous Thai border -- just as occurred in 1988, but this time with COVID-19 risks attached.

Here are five things to know about the COVID-19 vaccination program in Thailand:

What do Thailand's vaccination road map and portfolio look like?

March 1 is very much the thin edge of Thailand's vaccination wedge. The initial AstraZeneca and Sinovac doses will go to health workers, older people and those medically at risk. In the coming months, another 2 million Sinovac doses will arrive for use in high-risk areas like Samut Sakhon (820,000 doses), Bangkok (800,000) and Tak (160,000), a province bordering Myanmar. A much smaller number of doses will go to eight other provinces.

In May or June, 26 million AstraZeneca doses produced locally should become available, followed by another 35 million after August. Thailand hopes to inoculate 31 million residents by the end of 2021, roughly 45% of its 66 million people. The locally produced vaccine, expected to be crucial in accelerating the inoculation program, will be made by Siam Bioscience in partnership with AstraZeneca.

What is Siam Bioscience's background?

The company was established in 2009 during the reign of King Bhumibol Adulyadej with registered capital of 4.8 billion baht ($158 million at current rates) from the Crown Property Bureau. The late king wanted Thailand to develop in the biosciences sector and become less reliant on often-expensive foreign pharmaceutical imports. The company formed a productive relationship with Cuba, which is renowned for cost-effective health care. In 2016, Siam Bioscience launched its first product, erythropoietin, a hormone that stimulates red blood cell production.

The Crown Property Bureau, which managed the crown's assets when King Maha Vajiralongkorn succeeded his father in 2016, used to hold most of Siam Bioscience's shares, but they were transferred to the king's direct possession in two stages in 2018 and 2019, according to commerce ministry documentation.

On April 20, 2018, a total of 899,997 Siam Bioscience shares were transferred to Tun Ladawan, a limited company owned by the Crown Property Bureau, and one share each was given to Apiporn Parsawat, Thananya Lerdpongsopong and Piyawan Wanankrit for a total of 900,000.

On April 13, 2020, 47,999,998 shares were transferred into King Maha Vajiralongkorn's name, and one share each went to Air Chief Marshal Satitpong Sukwimol, the king's lord chamberlain, and Police Col. Thumnithi Wanichthanon, a director of both Siam Commercial Bank (SCB) and Siam Cement Group (SCG), for a total of 50 million shares. The king is the largest private shareholder in both SCB and SCG, and as with Siam Bioscience holds the shares directly in his own name.

Late in November 2020, AstraZeneca selected Siam Bioscience as its sole partner in Thailand to manufacture the COVID-19 vaccine it developed in partnership with Oxford University. The deal was brokered with open SCG involvement. This is the first time Siam Bioscience has manufactured a vaccine. Thailand has limited experience with vaccine production, and those familiar with the sector say finding suitably trained technicians will be a major hurdle.

Why has Siam Bioscience been in the news?

Compared with other countries in Southeast Asia, Thailand has been slow to roll out its COVID-19 vaccination program, making it an issue of considerable public interest. AstraZeneca said it selected Siam Bioscience as its exclusive partner for initial production of 26 million doses for Thailand and 174 million for distribution in other countries.

Thanathorn Juangroongruangkit, a 42-year-old billionaire and former opposition party leader, used a Facebook livestream in January to question Siam Bioscience's exclusive arrangement. His comments followed six months of youth-led street protests that have included unprecedented scrutiny of the monarchy and the handling of its assets. A lese-majeste complaint was immediately filed against Thanathorn.

Will Thailand get the vaccinations it needs?

The health minister has said he expects AstraZeneca vaccine produced in Thailand to be as good as anywhere else, and the company has a clear reputational need to ensure that is the case. The vaccine has the advantage of requiring much less of a cold chain distribution system than some of its rivals.

The efficacy of AstraZeneca's vaccine is upward of 70.4%, compared with over 50% for Sinovac's product and around 95% for those from Pfizer and Moderna, according to the World Health Organization. Even if they do not always prevent COVID-19 infection, all the vaccines are believed to reduce the ill effects from COVID-19 infections.

What are the challenges to get the population inoculated?

Timely vaccine procurement undoubtedly remains Thailand's biggest challenge, and Siam Bioscience has boldly made itself responsible for delivery. In most respects, Thailand has great advantages, including robust logistics. DKSH Thailand, a company offering "market expansion services," has been selected to transport vaccines in a "brilliant box" that keeps contents at the correct temperature even during shipment to hospitals and clinics in remote areas.

Thailand's overall health care system ranked sixth in a 2019 survey by U.S. magazine CEOWORLD, beating European countries such as France. One of its secret weapons is a 1.5 million-member army of health volunteers who have proved invaluable in implementing affordable health care.