Five things to know about India's proposal, US support and China's chance to gain 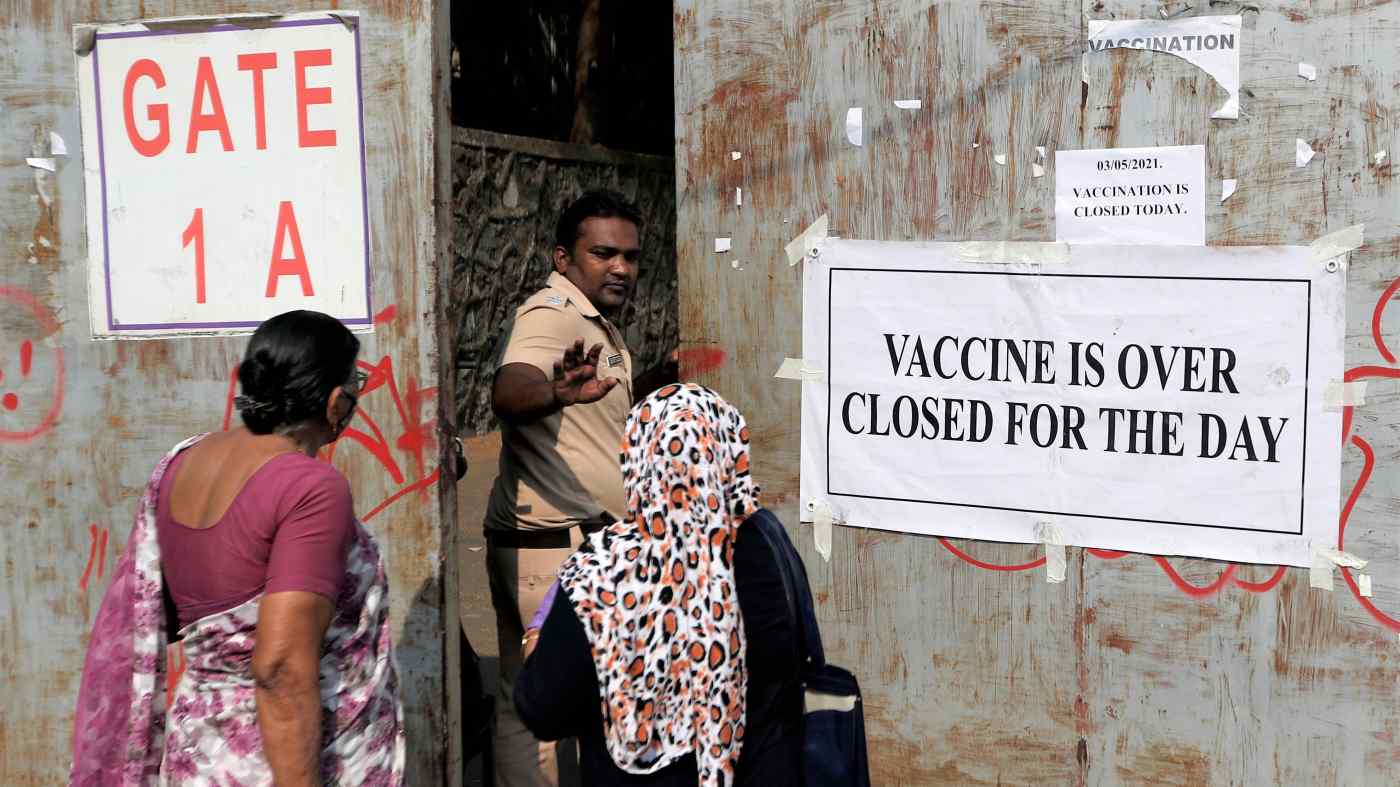 An Indian policeman asks people who came for COVID-19 vaccine shots to leave due to exhausted supplies in Mumbai on May 3.   © Reuters
AKANE OKUTSU and KIRAN SHARMA, Nikkei staff writersMay 14, 2021 16:05 JST | India
CopyCopied

Other emerging countries such as Pakistan, Mongolia and a group of least-developed nations including Bangladesh have backed the idea as well. They argue patents and other restrictions hinder timely access to affordable inoculations and could prolong the pandemic.

A spokesman for China's Commerce Ministry on Thursday said Beijing also supports taking the proposal "on exemptions for anti-epidemic materials" into the consultation stage.

On the other hand, pharmaceutical companies are resisting the waiver, not only in the U.S. but in other countries like Japan, which has lagged behind in COVID-19 vaccine development.

Who would benefit if patents are waived? What are the possible downsides? Here are five things to know about the debate.

How did the patent waiver talks come about?

India and South Africa in October submitted a patent waiver proposal for vaccines and medicines to the WTO's Council for Trade-Related Aspects of Intellectual Property Rights (TRIPS). They asked for "a waiver from the implementation, application and enforcement" of several sections of the TRIPS Agreement in relation to "prevention, containment or treatment of COVID-19."

This would extend beyond simply freeing up intellectual property covered by patents, but also reveal trade secrets. Companies like Pfizer, BioNTech and Moderna have not disclosed all their related technologies in patent documentation.

U.S. Trade Representative Katherine Tai said the Biden administration's "aim is to get as many safe and effective vaccines to as many people as fast as possible." She also said, "Those negotiations will take time given the consensus-based nature of the [WTO] institution and the complexity of the issues involved."

Tai on Thursday reiterated her support to U.S. lawmakers and in a call with South Africa's trade minister, according to Reuters. 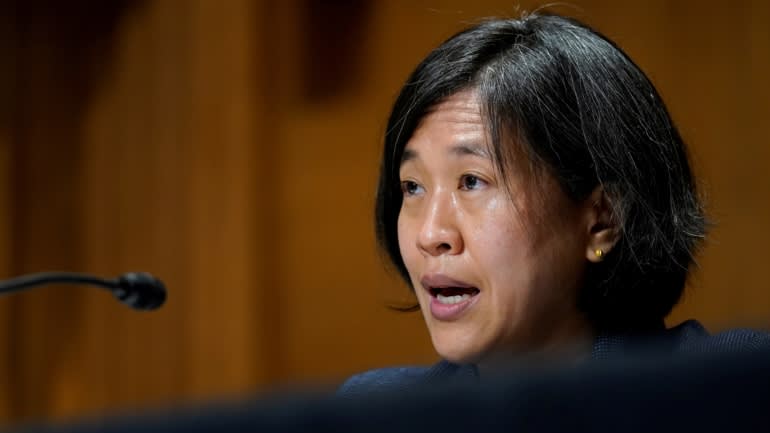 Some observers see the U.S. move as a response to growing Chinese and Russian influence in the developing world through "vaccine diplomacy." The U.S. has also been accused of hoarding vaccines -- prompting an announcement in late April that it would share up to 60 million doses of the AstraZeneca shot as long as they meet Food and Drug Administration quality standards.

There is a precedent for this. In the case of AIDS and HIV drugs, prices did drop thanks to relaxed intellectual property protections under the WTO Doha Declaration in 2001 and a related agreement in 2003. Countries suffering from health emergencies were allowed to make patented products without the consent of the patent owners. Countries lacking their own production capabilities were given the option of importing cheaper generics made in places such as India.

But in the case of COVID-19 vaccines, information not included in the patents is needed to copy them. And pharmaceutical companies argue the waiver would not immediately mean better access. "Waiving intellectual property rights cannot assure the production of comparable vaccines," George Nakayama, president of the Japan Pharmaceutical Manufacturers Association (JPMA), said in a statement.

Nakayama warned that production by more players "may accelerate the shortage of raw materials" and other necessary equipment such as vials -- with no guarantee that the alternative shots would match the originals' quality.

Critics also say that materials shortages could make it harder for existing players to increase output, potentially even pushing prices up.

What, exactly, is India's argument?

Indian Prime Minister Narendra Modi had spoken with Biden about the proposal in an April 26 phone call. After the U.S. backed the suggestion, Modi's government released a statement on May 6: "The waiver is an important step for enabling rapid scaling up of manufacture and timely availability of affordable COVID-19 vaccines and essential medical products."

Speaking at a virtual World Economic Forum trade discussion on Wednesday, Indian Commerce and Industry Minister Piyush Goyal called on countries to share vaccines liberally with those in dire need. The joint proposal with South Africa, he said, seeks only a "temporary and very focused, limited waiver of TRIPS" for fighting the COVID-19 pandemic.

No country is suffering more from COVID-19 than India is right now, with hundreds of thousands of infections per day. Goyal said speed is of the essence, calling for not only the TRIPS waiver but also technology transfers and efforts to secure more raw materials.

He also argued that further empowering India -- already regarded as the vaccine factory of the world -- could "actually help the world in ramping up vaccination very rapidly."

"I do hope that this global collaborative effort and action ... will bear fruit," Goyal said, observing that extraordinary times require out-of-the-box solutions. "Over 100 countries have already supported [the waiver] and I'm sure ... those who are not yet on board will appreciate [that] it is for everybody's good." 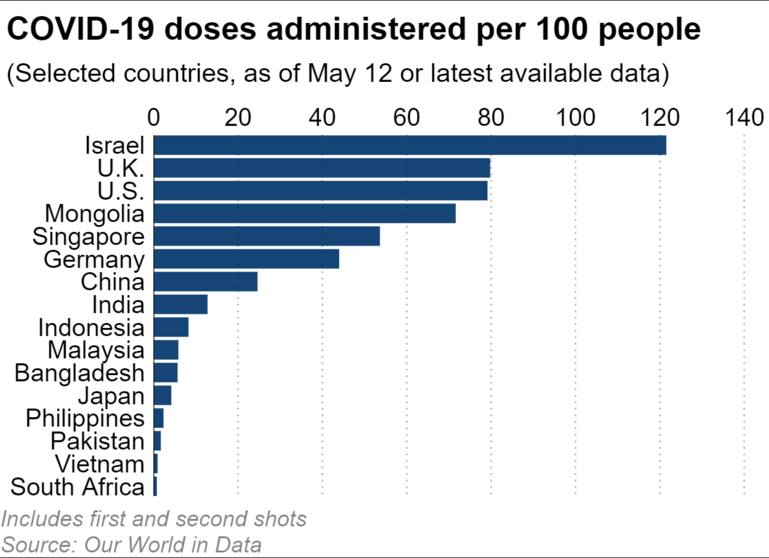 Health experts in India are championing the waiver as they witness hospitals being overwhelmed.

"Lately, the U.S. has given a favorable response to India's proposal at the WTO, but the EU and U.K., I believe, are still not on board," he said, adding the patent waiver could be granted on a temporary basis for one or two years.

He also noted that this could apply to India's homegrown Covaxin vaccine, "so that other countries too can manufacture it. Similarly, a waiver could pave the way for Pfizer and Moderna vaccines to be made in India."

Asked whether Indian manufacturers stand to profit from a waiver, Dhamija said, "I don't think this is a matter of concern." He said the country's vaccine makers are already selling their shots at a low price, a little over $2 per dose, for the Indian government's inoculation drive.

Dhamija acknowledged opponents' misgivings. "It is easy to give the recipe for a vaccine but technology transfer is a difficult issue to tackle. At the same time, there may also be concerns about quality controls."

Still, he said the bottom line for the world is that "no one is safe until everyone is safe."

Western pharmaceutical companies are telling U.S. officials that they fear exposing their technologies to China, the Financial Times reported. The still-under-wraps expertise could be used not only for COVID-19 shots but other vaccines and therapeutics, stripping the companies of their competitive edge.

Pfizer and Moderna have produced what are called messenger RNA vaccines, a new technology that does not contain live virus and instead instructs cells to produce a protein found in the coronavirus, creating immunity. China's vaccine producers, meanwhile, have relied on conventional methods using weakened virus. A production facility in Germany for the Pfizer-BioNTech vaccine: Some technologies needed for the shot remain secrets.   © Reuters

The Pharmaceutical Research and Manufacturers of America released a statement that the U.S. stance on the waiver means "handing over American innovations to countries looking to undermine our leadership in biomedical discovery."

But some say the waiver would not be an automatic win for China.

The stock market seems to agree. Chinese vaccine makers including CanSino Biologics and Shanghai Fosun Pharmaceutical Group fell after the U.S. announcement, just like the shares of Pfizer and Moderna.

China's state media has been lukewarm toward the U.S. move, calling it a "political tactic."

How would it affect the pharmaceutical industry over the long term?

One major concern is a loss of incentives for costly research and development.

Pharmaceutical research has a low success rate and requires enormous sums of money. Without the profits generated from intellectual property rights, "there would be no new drugs," as companies would have no hope of recouping their investments, a JPMA spokesperson said.

Ito said this raises "concerns about how to respond to future pandemics." Speedy vaccine development, he said, is driven in part by the chance to corner the market.

If the patents are to be waived, Ito suggested other steps to spur innovation will be needed, such as establishing a fund to buy such knowledge. But setting prices and deciding how to deal with the technical secrets would be no easy task.

Ito said a quicker solution might be for Group of Seven countries to "consider policies to expand production capacity and strengthen the [World Health Organization's] COVAX initiative to purchase and distribute vaccines to developing countries."