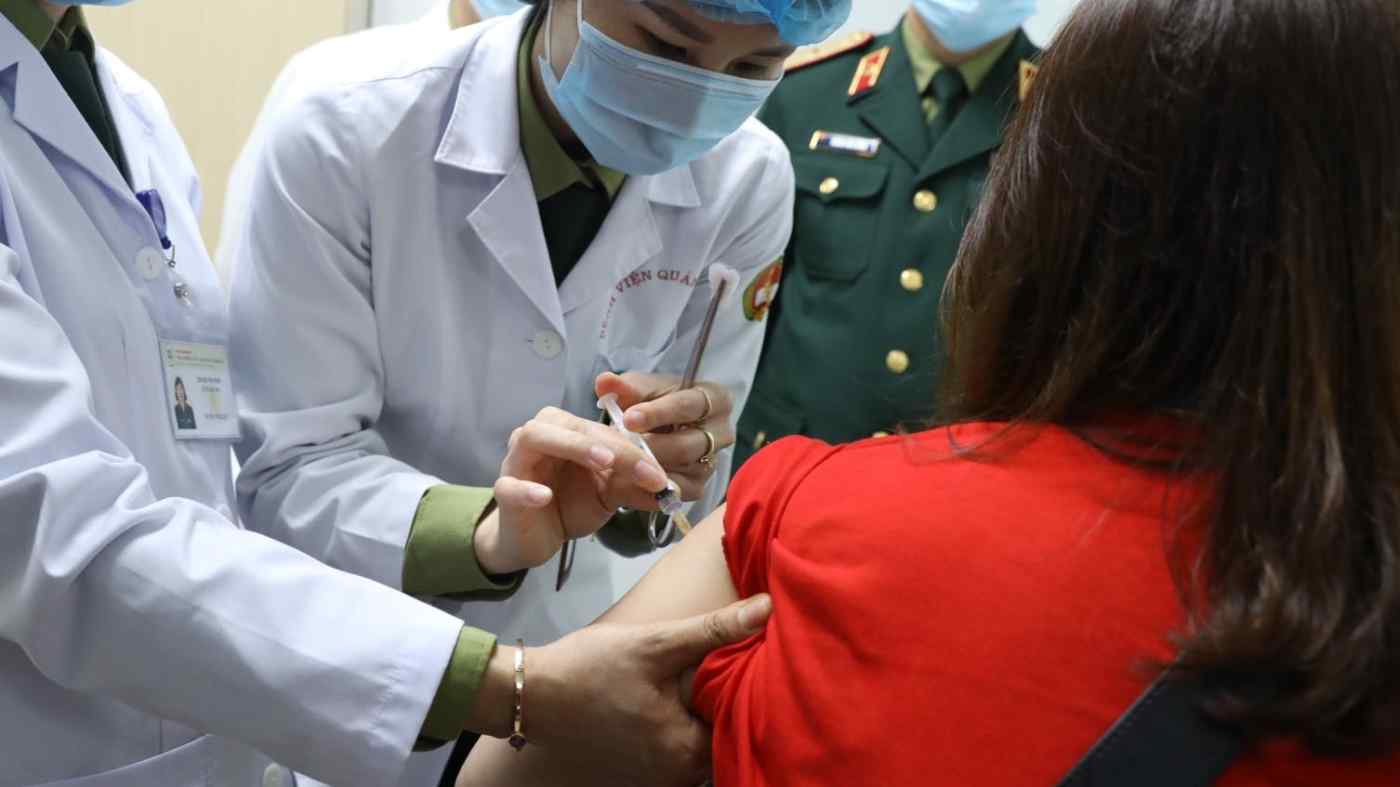 HANOI -- As COVID-19 ravages Vietnam and foreign vaccines continue to be in short supply, the government is ramping up efforts to accelerate the development of domestic vaccines. But the debut of the first Vietnamese vaccine may be pushed back beyond this month as health authorities take extra care to ensure the safety and effectiveness of the vaccines.

The debut in September of Nanocovax, the front-runner COVID-19 vaccine project in Vietnam, has become uncertain after Vietnam's National Ethics Committee in Biomedical Research issued a statement on Sunday. It said the committee would send vaccine documents to the Advisory Council for the Registration of Circulation of Drugs and Medicinal Ingredients for review.

In August, Prime Minister Pham Minh Chinh hinted that inoculations using the vaccine could start in September, and ordered the Health Ministry and other government agencies to ensure swift emergency authorization of the jab.

The ethics committee asked Nanogen to supplement its reports, continue vaccine trials with the aim of completing them by March 2022, and provide timely updates to health authorities. "It is necessary to continue to evaluate the protective efficacy of the Nanocovax vaccine," state media said on Sunday.

Nanocovax is made by Vietnamese startup Nanogen Pharmaceutical Biotechnology. It is a joint project with Vietnam Military Medical University -- a research institute under the Defense Ministry -- and is nearing completion of Phase 3 clinical trials involving some 13,000 people.

Nanogen began Phase 1 trials in December 2020, with the company insisting the trials so far have shown sufficient efficacy and safety. Nanogen claims it has the capacity to produce roughly 100 million doses a year at facilities in Ho Chi Minh City. On Aug. 8, the company signed an agreement with India's Vekaria Healthcare for technology to allow mass production of Nanocovax.

Vietnam has a long way to go to get the majority of the population vaccinated as it faces a global shortage of vaccines. The situation has prompted Hanoi to accelerate projects to develop or manufacture vaccines and make them available as soon as possible.

Vietnam's struggle to rein in a surge of new cases has been largely attributed to the delta variant, a highly transmissible strain of COVID-19 first detected in India. Fully vaccinated people in the country stood at 6.3%, lagging behind peers in Southeast Asia including Indonesia and the Philippines, which respectively had full vaccination rates of 15.83% and 16.19% as of Sept. 16, according to Our World in Data. About 27% of Vietnam's population have received at least one jab.

The pandemic has particularly hit Ho Chi Minh City and its population of 9 million, pushing up the percentage of people who have died in the ongoing outbreak to 3.9%, according to the World Health Organization's Vietnam COVID-19 Situation Report as of Sept. 12.

The national proportion of fatal cases was 2.5%, 0.4 percentage points higher than the global average. The number of deaths in Ho Chi Minh City since late April, when the current wave hit Vietnam, reached 13,149 on Sunday, accounting for 77% of the country's total of 17,090 deaths. Among other domestic vaccine projects, leading Vietnamese conglomerate Vingroup has teamed up with a U.S. vaccine maker to begin production of its COVID-19 vaccine in Vietnam early next year.

On Aug. 15, Vingroup began Phase 1 trials of a vaccine developed by Arcturus Therapeutics Holdings, based in the U.S. city of San Diego. Conducted in cooperation with the Health Ministry, the trial involves some 100 people. Arcturus has agreed to provide the Vietnamese company with an exclusive license to make its mRNA COVID-19 vaccine candidate -- the same type as those developed by Pfizer and Moderna -- solely for sale and use in the country.

Arcturus announced on Wednesday that it finished Phase 1 trials, and has started Phase 2, expecting to enter Phase 3 trials in October, following the approval of the Ministry of Health. The company is preparing to start production next March.

Setting up the Hanoi production facility capable of producing 200 million doses annually is on track, a source familiar with the project said. Vietnam has a population of over 100 million.

Another COVID-19 vaccine developed by the Institute of Vaccines and Medical Biologicals under the Ministry of Health is now undergoing Phase 2 trials.

A senior official at the ministry has told local media that these three projects are regarded as "domestically made vaccines" and said the government is confident that Vietnam will achieve vaccine self-sufficiency.

On Sept. 10, a special government team encouraged local vaccine makers to speed up development by reducing unnecessary steps in research and trials. Authorities were also asked to minimize and expedite legal processes and provide financial support to both Vietnamese self-researched and tech-transferred vaccines.

It is, however, unclear whether vaccines developed in Vietnam will be effective against new variants, including delta. The vaccine business requires constant investment in research and development, mainly because viruses often mutate to become even more contagious, deadly or vaccine-resistant.

"The target is to have vaccines made in Vietnam by the end of 2021 or early 2022," said Deputy Health Minister Tran Van Thuan on Sept. 10.

Hanoi has been ramping up efforts to obtain more foreign vaccines while waiting for domestic jabs to hit the market.

The government also said it had reached agreements to produce foreign vaccines in Vietnam, including Sputnik V and Abdala.