Their call comes as part of a broader movement by the region's garment workers, underscoring the tough conditions facing the industry even as demand for clothing and shoes rebounds in the U.S. and other major markets.

They say $117 million in wages were lost during Cambodia's lockdown in April and May, a figure based on a study of 114 factories undertaken by local unions and the Clean Clothes Campaign.

The group calculated Cambodia's more than 700,000 garment workers were owed $393 million in outstanding wages and severance since the start of the pandemic.

One reason for the much larger number, the groups say, is that factories are failing to pay severance as stipulated in the country's labor law. The Labor Ministry last year advised factories closing because of economic hardship that they do not have to pay damages or make prior notice payments. 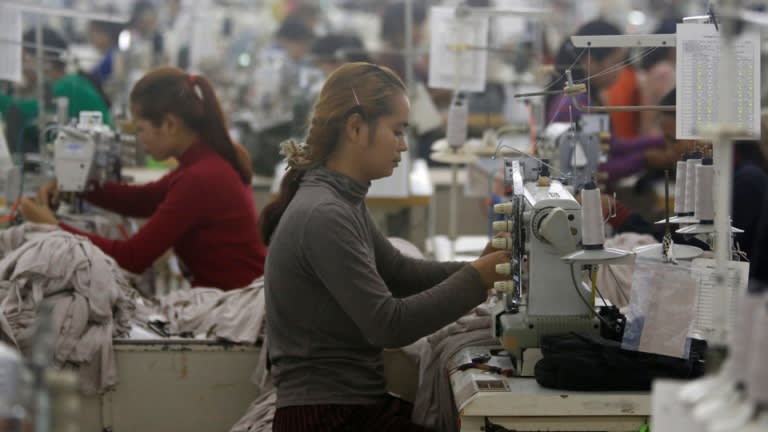 Garment workers in Cambodia are joining a global movement calling on fashion brands to help them weather the coronavirus pandemic.    © Reuters

Worker rights advocate Kun Tharo said this advice violated the law but was being used by the sector's mediation mechanism to deny adequate payouts.

"While workers are not getting a decent living wage, brands need to be held accountable and come up with concrete actions," said Tharo, of the Center for Alliance of Labor and Human Rights.

The Labor Ministry did not respond to Nikkei Asia's request for comment as of publication.

Global brands, many of whom have seen their earnings sharply improve this year, say they have attempted to limit the impact of the pandemic on garment workers.

Adidas told Nikkei Asia that the German company was committed to fair wages and had helped key suppliers secure bank finance to weather the pandemic.

"The vast majority of our supplier factories [have] retained their workforce, albeit with reduced working hours due to lockdowns or suspensions," it said.

Puma, meanwhile, said the Cambodian unions' letter did not mention factories supplying Puma and that the company had sought to avoid order cancellations as much as possible.

"In Cambodia, we only canceled 0.2% of our apparel orders," a spokesperson told Nikkei Asia. "The number of factories we work with did not decrease during the pandemic."

"Everything becomes more expensive this year, from shipping and logistics cost, textile raw materials to labor," he said. "The unexpected resurgence of COVID cases in summer 2021, especially the delta variant, has caused new market uncertainties."

In Vietnam, which last year surpassed Bangladesh as the world's second biggest garment exporter after China, surging COVID-19 rates have forced 30% to 35% of the country's apparel and footwear factories to suspend operations, according to a report by the Vietnam News Agency.

In Cambodia's case, the pandemic compounds other trade woes. Last year it lost some of its European trade preferences due to human rights violations. Its exports to the EU of clothes, footwear and related products shrank 14% on the year in the first five months of 2021.

Myanmar, meanwhile, has seen the growth of its promising garment sector devastated following the military takeover in February. Year-on-year exports to Europe dropped 17% in the first five months and 2% to the U.S.

Lu, who surveyed 31 major fashion companies about the coup, said some brands had already shifted to Cambodia and were unlikely to return.

As the region's factories struggle to return operations to normal, they should expect more uncertainty ahead, Lu said.

"Overall, the world textile and apparel trade recovery process from COVID-19 will differ from our experiences during the 2008 global financial crisis," he said. "It is the pandemic that sets the agenda."