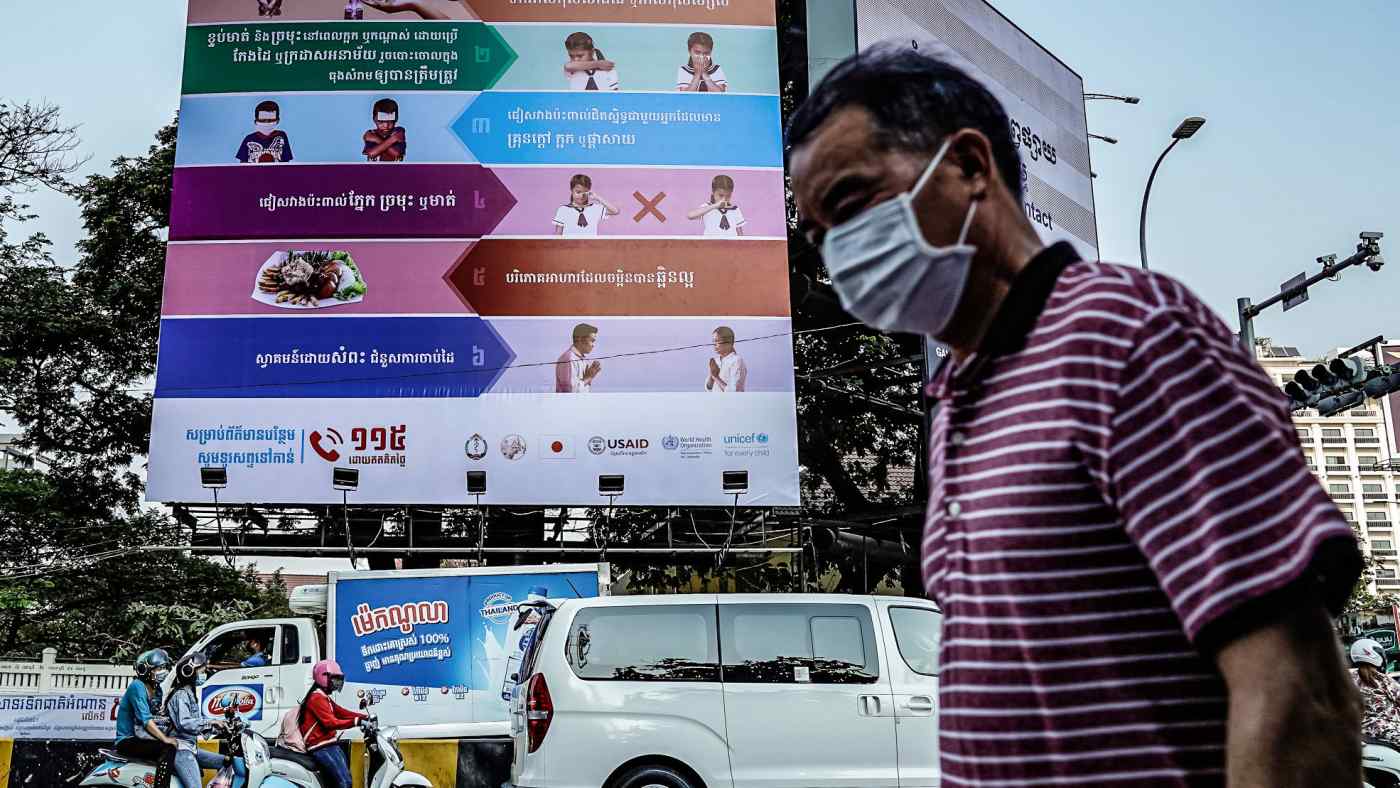 PHNOM PENH -- Cambodia is racing to contain its first recorded community transmissions of COVID-19 from a cluster linked to the country's prison chief.

The outbreak, which threatens to derail Cambodia's coronavirus success story, emerged on Saturday when director of the country's prisons Chhem Savuth, his wife and four family members tested positive for the new coronavirus.

As of Tuesday morning, health authorities have identified 17 infections linked to the cluster in Phnom Penh and tested more than 4,000 people across the country.

The government has banned gatherings of more than 20 people for two weeks and ordered schools, museums, and cinemas to temporarily close.

Some other businesses have shut their doors. Aeon Mall 1, one of the country's largest shopping centers, remains closed after being visited by Savuth's wife prior to her positive test.

The 56-year-old -- who has residences in the capital and Siem Reap -- also visited a gym at Phnom Penh Hotel, which has also shut.

Contacts linked to the family have been identified in Stung Treng, Banteay Meanchey and Mondulkiri provinces.

Prime Minister Hun Sen called the coming days "crucial" in avoiding a mass outbreak. Speaking on Monday, he said the cluster's origin was yet to be determined.

He ordered provincial authorities to set up quarantine facilities and said the government would provide a $5 daily payment for poor people forced to go into isolation because of what's now being called the "November 28 event."

"We must do a large scale operation fast action to fight COVID-19," he said, adding that people should unite and avoid "blaming" individuals. "It is a big test for Cambodia."

Several top officials -- including the defense, finance, justice and interior ministers -- have entered self quarantine after direct or indirect contact with Savuth.

The National Assembly has arranged for dozens of lawmakers -- including the prime minister's youngest son and brother -- to be tested after a full parliamentary session last week included an official who had met with the prison boss.

The Interior Ministry urged police and prison staff who have had direct or indirect contact with confirmed cases to urgently get tested and enter self quarantine.

Photos uploaded to the Facebook page of the General Department of Prisons show Savuth meeting with officials and inmates at Phnom Penh's main male and female prisons on Nov. 23.

The prison chief, who was maskless in the photos, promoted "health and hygiene" during the visit, according to the post.

The outbreak could be catastrophic should it enter Cambodia's drastically overcrowded prison system, a scenario experts fear could create death traps.

The spokesman for the prison department was unreachable on Tuesday. No specific announcement has been made regarding the status or testing of prisoners.

The cluster follows -- but has not been connected to -- a scare linked to Hungary's Foreign Minister Peter Szijjarto, who tested positive after visiting the country on Nov. 3. The Hungarian delegation was linked to four infections.

While hit hard by the pandemic's economic fallout, Cambodia has so far managed to avoid the type of fast-spreading outbreak that has overrun many Western countries.

The country currently has 22 active cases of Covid-19. These include 326 confirmed cases and 304 recoveries.