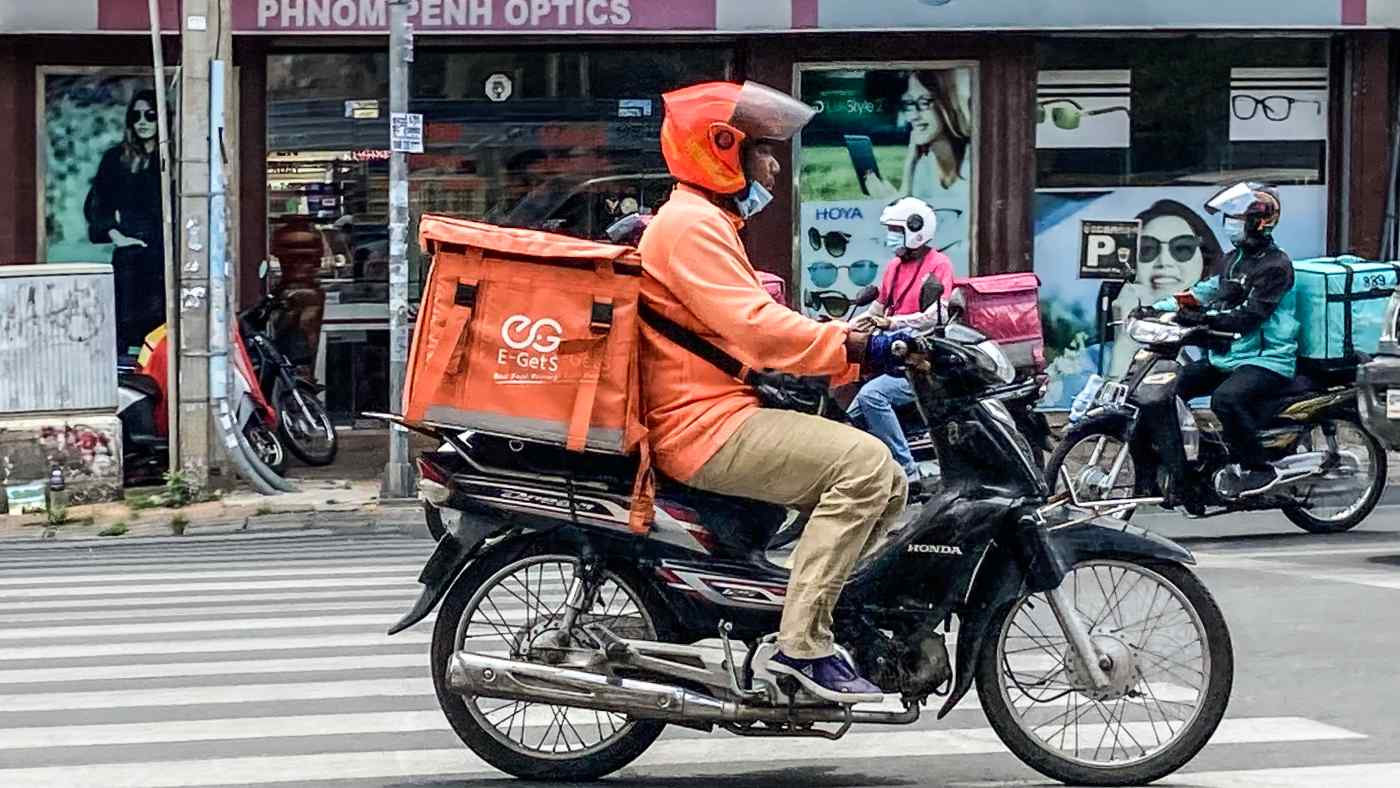 With his garment worker wife furloughed, the 24-year-old relies on the 80 cents he earns per delivery to feed his extended family of 10 and repay a loan.

And with the Cambodian capital under lockdown since April 15 to combat a sudden coronavirus outbreak, hungry customers are counting on him to keep them fed.

"I know my job is important now," said Savit, who takes home roughly $15 to $20 each day. "Without us, people in lockdown could have nothing to eat."

Savit is one of the thousands of drivers clad in bright uniforms zipping around the capital on motorbikes. As in other countries struck by COVID-19, usage of delivery apps has surged -- bringing opportunities but also risks.

Local newspaper the Khmer Times quoted an executive of a "popular delivery platform" who said several staff had been whipped by cane-wielding police officers.

Savit told Nikkei Asia he had not experienced problems or police violence.

While drivers dodge dangers on the street, local and foreign platforms continue to jostle for market share.

Nham24, which bills itself as "Cambodia's first super app," is up against the deep pockets of Foodpanda. The Singaporean company, acquired by German giant Delivery Hero in 2016, entered Cambodia in December 2019 and quickly moved into 10 cities.

The pandemic has accelerated the adoption of food and grocery delivery apps, industry figures say. The first uptick came in April 2020 when the government, concerned a COVID outbreak was looming, announced a travel ban in the country.

That outbreak did not come, but the surge in consumers making use of delivery services transformed into steady growth, said Kem Bora, a partner at investment advisory Mekong Strategic Partners, which has invested in Nham24.

"We thought everything was just going to climb back down to normal, but it didn't. It stayed ... and just kept on going up," he said.

After a year of avoiding a health crisis, Cambodia in February detected an outbreak now linked to more than 11,000 infections. Phnom Penh and several other cities have implemented lockdowns. Since the restrictions began in April, Bora said, his app's orders have surged 40% to 50%.

Victor Lee, marketing manager for E-GetS in Cambodia, says the platform, with more than 1,000 full-time drivers, has also seen a spike.

"The impact of the lockdown has made the orders increase nearly 100% because most of the people stay home," he said.

The lockdown delivery boom comes amid broader growth in Cambodia's fintech ecosystem, which has seen the number of e-wallet accounts grow from 5.2 million in 2019 to 9.56 million in 2020, according to the central bank.

At both Nham24 and E-GetS, the number of e-payments recently exceeded that of cash transactions for the first time.

"Before the outbreak of the epidemic, transactions of cash payments accounted for about 55%," Lee said. "Since March, cash payments have fallen to 45%."

Borima Chann, founder of Nham24, said digital payments on the also platform hit 55% in April, compared with 46% in March and 40% in February.

Chann said the company had tackled Cambodians' preference for cash by offering perks and incentives for digital payments.

Nham24 had also equipped drivers with QR codes. The payment method has skyrocketed in popularity in recent years. The National Bank of Cambodia recorded 4.8 million QR code transactions in 2020, equivalent to $73 million.

Chann said being a local player gives Nham24 a leg up amid growing competition.

"Even as the competition in the delivery app sector is growing fiercer in Cambodia, as a local, home-grown start-up we are well-positioned to hold the lead in the market for the foreseeable future," he said. "While most operators sustain significant operational losses, our business is not leveraged, remains profitable, and doesn't rely on the constant inflow of investor funding."

As the services adjust to lockdown demand, questions about market saturation hover on the horizon. Similar to Cambodia's ride-hailing sector, delivery drivers are facing intense competition and price cuts that are making it harder for them to earn a sustainable income, some told the local Voice of Democracy outlet.

Bora of Mekong Strategic Partners says the market has enough room to grow, even as more traditional travel and cargo companies attempt to move into food and e-commerce delivery.

"The interesting thing now with the easing of the lockdown," he said, "is whether or not it is a permanent trend, that people are ordering from food delivery companies."

We're pretty confident that even if they don't buy food on these platforms there's just going to be other things."

Foodpanda has no plans to take its foot off the accelerator. Cambodian Managing Director David Ly says the company is focused on moving into more cities. He called competition in the country "intense but healthy."

"The food delivery industry in Cambodia is in its early stages," Ly said via email, "and there's great opportunity for growth, especially beyond the big cities."

KiwiGO, formerly Meal Temple, also has big plans. After beginning food delivery in Phnom Penh in 2013, it expanded into Laos and Myanmar, helped by two rounds of fundraising.

This year it announced the launch of a super app created via a merger with Hong Kong fintech company Kiwi Pay. Called KiwiGO, headquartered in Singapore and focused on frontier markets, it will be rolled out in more than 20 countries.

Meal Temple founder Maxime Rosburger says Cambodia has bred entrepreneurs who are "fighters" but that the nascent startup scene makes it difficult to attract large investors.

He is proud, though, that his company's technology, with "Cambodian DNA," is "going global."

"We can put Cambodia in the spotlight," he said.