Cambodia sticks by China as it shuts out West over coronavirus PHNOM PENH -- Cambodia will on Tuesday close its borders to foreign nationals traveling from five Western nations and Iran, after recording its 12th case of COVID-19, but at the same time it has proceeded with military drills involving hundreds of Chinese soldiers.

Prime Minister Hun Sen had previously downplayed the danger of the new coronavirus -- at one point berating journalists for wearing masks at a news conference. But he has reversed course by temporarily closing public and private schools and banning travel from the six countries, including the U.S., for 30 days.

These precautions, however, did not extend to the gathering of more than 3,000 troops, 265 of whom were from China, that began on Sunday. Featuring heavy weapons, tanks and helicopters, the drills are the fourth iteration of the "Golden Dragon" exercises and run until April 1. The annual training event has grown as Cambodia's longtime leader has moved closer into Beijing's orbit while facing censure from Europe and the U.S. over his human rights track record.

Hun Sen's loyalty has been on display since the virus emerged in China's Wuhan Province. The prime minister declined to enact travel restrictions against China even as cases there surged. He also made headlines in February when he flew to Beijing to meet President Xi Jinping amid the initial outbreak.

He has taken a different approach, though, as the virus now surges outside Asia. Last week he moved to ban "foreigners traveling from" Italy, Germany, Spain, France, and the U.S., effective March 17. He later extended the restrictions to Iran. On Saturday, he released a further statement urging Cambodians not to visit the targeted countries. 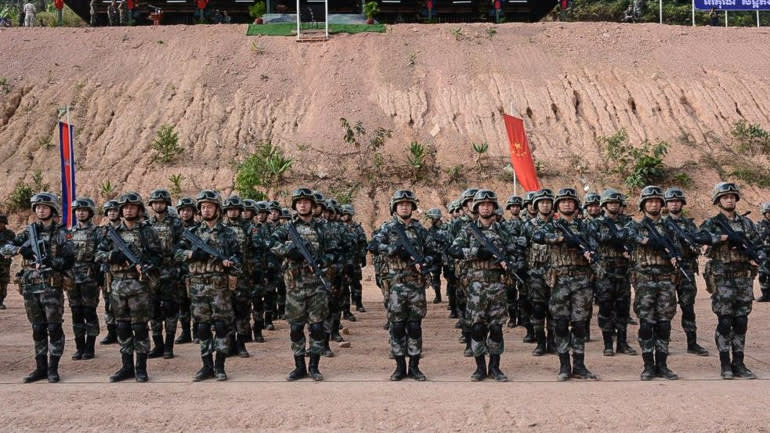 The Golden Dragon exercise features more than 3,000 troops, including 265 from China. (Photo courtesy of Cambodia's Ministry of National Defense)

Speaking at an event, Hun Sen called critics who pointed out his inconsistency "irresponsible."

"You are too ill-minded and you should not be a Cambodian citizen regardless of your Cambodian blood."

The travel ban's ambiguous language has raised confusion about how, and to whom, it would be applied. In an email to its citizens, the U.S. Embassy said it had sought further information.

"Cambodian authorities have not clarified the application of this suspension for individuals currently outside of the country with valid Cambodia residence or work permits, or for individuals from the five cited countries seeking to enter Cambodia from other points of origin," the embassy wrote.

"American citizens traveling in the region who wish to travel or return to Cambodia in the near-term should make every effort to do so before this suspension of entry goes into effect on March 17, 2020."

In a Facebook post on Monday, Kirth Chantharith, the director of Cambodia's Immigration Department, said people with diplomatic credentials from the six restricted countries would still be allowed to enter but would have to self-isolate for 14 days.

Nationals from the six countries who have not been in their homelands for more than 14 days can enter Cambodia but must show proof of their whereabouts during the two-week period, he said. Pilots who have flown to the countries are being asked to undergo health checks and stay isolated.

To date, Cambodia has detected a total of 12 confirmed COVID-19 cases, with several new ones cropping up in recent days. Among these is a staff member at a Canadian international school who had recently traveled to Thailand; two Cambodian Muslims who returned from a religious event in Malaysia; a Cambodian man who recently returned from France; and a 35-year-old French man and his 4-month-old baby.

The government has closed schools and universities across the country, and canceled events to celebrate the Cambodian New Year in April.

The virus has already pummeled the country's vital industries including tourism, which is reliant on Chinese visitors, and its $10 billion apparel export sector, which depends on China for raw materials. There are also fears that the country's poor public health care infrastructure will be quickly overrun if cases rapidly increase.

A spokesman for Cambodia's Foreign Ministry referred questions to the Ministry of Health, which did not respond to requests for comment by publication time.

The minister explained that a decision was made to proceed with Golden Dragon because China had taken "clear measures" to prevent the virus from spreading to the troops, Solimo said.

Solimo stressed that the participating soldiers had not come from Wuhan but had "come from a location near the Lao border."

"When they arrived in Cambodia, their health and physical condition has been checked thoroughly," he added. "We take it seriously."