With no recorded novel coronavirus cases, Tajik President Emomali Rahmon put his faith in hygiene. "Keeping homes clean and observing sanitary standards is one of the finest qualities of our people," he told a packed sports stadium in the northern city of Khujand on March 22. "And especially in situations when all kinds of infectious diseases are spreading fast."

Around 12,000 people -- many from local schools and universities -- danced, sang and marched to mark Navruz, the Persian New Year celebrated across the region. But the festive mood was in stark contrast to scenes in other Central Asian states, where the virus has been spreading rapidly since the first cases were detected in Kazakhstan on March 13.

Uzbekistan and Kyrgyzstan registered their first cases shortly after Kazakhstan, prompting immediate measures in all three countries and highlighting the challenges facing a region at the heart of China's Belt and Road Initiative.

Kazakhstan moved quickly, introducing a state of emergency on March 16 that brought restrictions on travel in and out of the country. It had already closed its border with China in January to prevent the spread from there, but its first cases turned out to be returnees from Germany and Italy. Uzbekistan also introduced a state of emergency and closed its borders on March 16, after its first case, a returnee from France, was diagnosed the previous day.

In Kyrgyzstan, three infected pilgrims returning from Mecca became the first reported cases on March 18, triggering a state of emergency on March 22. Upon arriving home, one of the three threw a party for 100 guests despite being instructed to self-isolate. 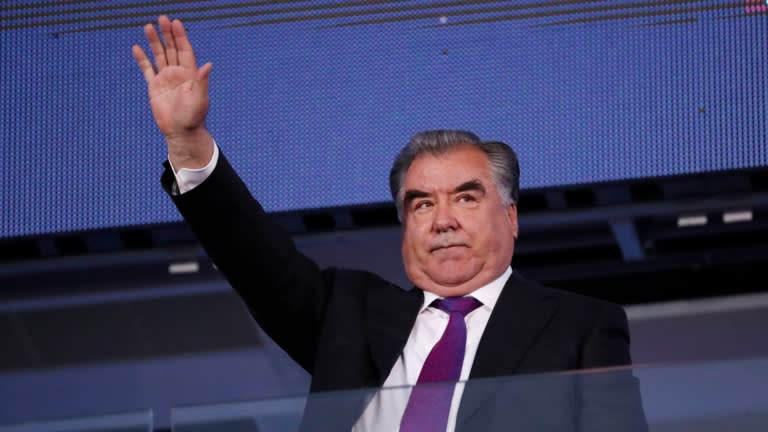 Emomali Rahmon, the president of Tajikistan, in 2019: He recently presided over a festival where he expressed confidence that good hygiene would protect the country.   © Reuters

Getting the message across to the public about the importance of social distancing and closing nonessential businesses has proved difficult. In Uzbekistan's capital, Tashkent, police broke up a large wedding party last Saturday. In Kazakhstan's capital, Nur-Sultan, which entered lockdown on March 19, scores of arrests were made after cafes, beauty salons, billiard halls and saunas were found still operating.

Cases have continued to rise despite the restrictions.

As of Wednesday, there were 363 confirmed cases in Kazakhstan, with three deaths, 173 cases in Uzbekistan, with two fatalities, and 107 confirmed infections in Kyrgyzstan, with no deaths.

While Tajikistan has still not detected any COVID-19 cases -- unsurprisingly, since there are no reports that it is testing -- it has taken some limited measures to address the danger. The country's Ministry of Health says over 4,000 citizens who recently returned from abroad are in quarantine. But with no lockdown and many migrant workers coming home from Russia and various virus hot spots, the medical system in the former Soviet Union's poorest country could be severely tested.

Kyrgyzstan faces a similar problem with large numbers of workers returning from infected areas and straining its limited resources. On March 26, it became the world's first country to receive a coronavirus bailout from the International Monetary Fund, which is providing $120.9 million to address a balance of payments crisis and free up funds for the cash-strapped health care sector.

Uzbekistan is better prepared to accept returning migrants, having constructed a quarantine facility for 10,000 people from converted shipping containers outside Tashkent in just five days.

Kazakhstan and Uzbekistan have moved to bolster their economies and health sectors, with the former injecting around $10 billion while the latter plans to pump in $1 billion, while seeking the same amount in credits from international institutions. Both are also offering tax breaks for businesses and welfare assistance for those suffering financially from the crisis.

The sharp fall in oil prices and the economic slowdown in China, meanwhile, have only made matters worse for the region's energy exporters.

Kazakhstan has seen its currency, the tenge, lose 14% of its value against the U.S. dollar since early March. Along with Uzbekistan and Turkmenistan, it has suffered from declining demand for gas exports after PetroChina issued a force majeure notice on March 5, saying that it was cutting imports due to the epidemic.

China is a key player in Central Asia, whose governments have zealously embraced Belt and Road Initiative investments even though public opinion is less enthusiastic.

In February, more than 1,000 protesters, including some on horseback, forced plans for a $280 million Chinese trade and logistics center in eastern Kyrgyzstan to be canceled over fears of Chinese expansionism. There have also been protests around Kazakhstan in recent months against growing Chinese economic influence and mass detentions of Muslims, including many ethnic Kazakhs, in China's western region of Xinjiang.

But Central Asian governments have been eager to show their support for China during the coronavirus crisis, with Kazakhstan and Uzbekistan dispatching medical supplies in February to help contain the epidemic. Supplies are now heading in the reverse direction, most recently with a batch of surgical gloves and goggles, thermometers, and test kits sent to Tashkent. This demonstrated China's readiness "to stand and work with Uzbekistan" to fight the coronavirus, said Jiang Yan, Beijing's envoy to Uzbekistan.

One Central Asian country is unlikely to be seeking assistance against the coronavirus: Turkmenistan. This closed, secretive state has no officially recorded infections, although reports from within the country indicate a spike in hospital admissions for patients diagnosed with an acute respiratory viral infection. Some restrictions have reportedly been placed on domestic travel, but state media has studiously avoided mentioning coronavirus.

However, Turkmen President Gurbanguly Berdymukhamedov, a former dentist who prides himself on his medical knowledge, has issued some general guidance for warding off disease in these troubled times: Turkmens should look to folk medicine, as established by "our ancestors over millennia" as a means of counteracting "pernicious habits and preventing various infectious diseases," official media quoted the president as saying.

Topping the list of remedies: burning harmala, a medicinal herb, whose fumes the president seems to believe will be enough to stop the coronavirus dead in its tracks.