Central Tokyo crowds cut in half, but people still commuting

Despite state of emergency declaration, not all Japanese are staying at home TOKYO -- Fewer people were on the streets in Japan on Wednesday, a day after Prime Minister Shinzo Abe declared a state of emergency, though data shows crowds are not as thin as coronavirus hot spots in foreign countries like the U.S. and France.

There were 46% fewer people in Tokyo's Marunouchi business district at 8 a.m. Wednesday compared with the year-earlier Wednesday, according to consultancy GiXo, which used location histories from NTT Docomo to gather data.

This represents a significant decrease from April 1, when there was just 28% fewer people.

The crowd around Shinjuku Station was down by 37% from last year, and around Osaka Station by 45%.

Traffic is dropping as more companies adopt teleworking or downsize operations. Trading house Mitsui & Co. has banned its roughly 4,000 employees from going into work without prior approval, and closed down workplace cafeterias. Roughly 7,000 restaurants are also closing across Japan, according to a Nikkei survey of 70 mostly big-chain operators. Izakaya pub operator Daisyo is closing 443 locations until May 6, while yakitori chain Torikizoku shut down all 394 directly run locations in Japan on Saturday.

But despite calls to stay home, Japan's big cities are still far behind those in the U.S. and Europe that adopted earlier lockdown measures. Ridership on Paris trains was down 87% on March 29, according to a report by Google. France imposed a nationwide lockdown on March 17, with fines and jail time for those who break the rules. New York saw a 78% drop in ridership on March 29. In comparison, Tokyo's ridership was down 59%. 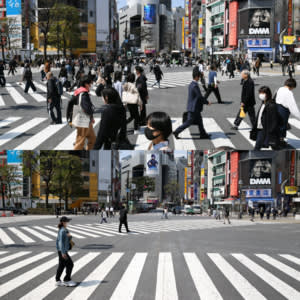 Before and after: Shibuya's main intersection on March 26, top, and on April 8. (Photos by Kei Higuchi)

Other cities in Japan were even further behind, with foot traffic around Hakata Station in Fukuoka Prefecture just 26% lower than usual. Delayed action means that businesses may have to remain closed for longer to flatten the curve of infections, which is most likely to hurt smaller consumer-facing businesses without large troves of cash.

Small and mid-size companies had 2.7 months' worth of cash on hand, a fiscal 2018 survey by Japan's Finance Ministry found. Hotels in particular had 2.5 months' worth, while restaurants and bars had just 1.4 months' worth.