Neighbors deepen cooperation as Washington vows to 'distrust but verify' 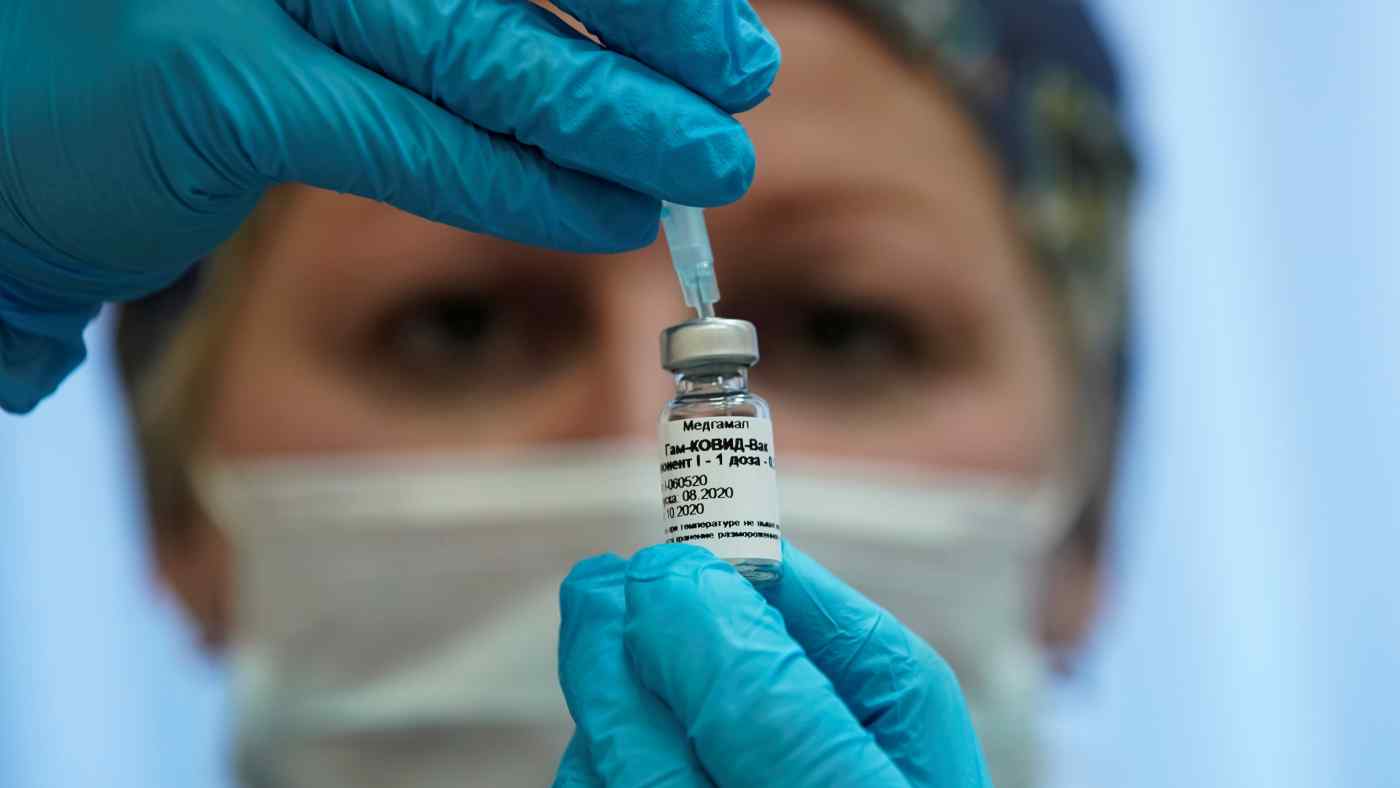 MOSCOW -- China and Russia, two countries whose efforts to develop coronavirus vaccines have drawn sharp critiques from the U.S., are stepping up cooperation in the inoculation race.

The neighbors have emerged as two leading contenders to supply COVID-19 shots. Of nine vaccine candidates that have reached Phase 3 trials worldwide, four are Chinese, according to the World Health Organization. And Russia in mid-August made headlines for being the first to register a vaccine, named Sputnik V after the legendary Soviet satellite.

Despite pushing its own vaccine, Moscow is enthusiastic about working with Chinese partners, in the latest sign of growing coordination between the two powers.

The lab will be run by the Chinese Academy of Sciences' Institute of Microbiology and the Mechnikov Research Institute of Vaccines and Serums. 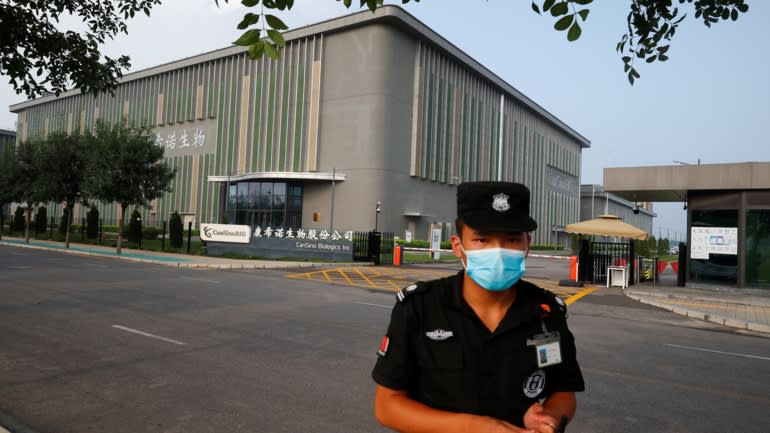 A security guard stands in front of a CanSino Biologics building in Tianjin. The company is conducting vaccine trials with a Russian partner.   © Reuters

A Petrovax representative told the Nikkei Asian Review that the vaccine will be tested on 625 volunteers at eight medical institutions across Russia. The trial is scheduled to run until the end of September and the results should come out this fall, though the volunteers will be monitored for another six months.

Once the vaccine is registered by the Russian Ministry of Health, Petrovax intends to begin producing it at its Moscow region plant for both the domestic and foreign markets, the representative added.

Nikolay Bespalov, director of development at Moscow-based pharmaceutical market research agency RNC Pharma, sees a few reasons Russia is exploring Chinese and other foreign alternatives even with Sputnik V in the pipeline.

Firstly, having several vaccines would allow the health care system to offer patients the option that suits them best. Secondly, it would help Russia ensure it can meet an urgent need for a large quantity of ready-to-use vaccines.

"Additionally, [the CanSino-Petrovax trial] is a direct opportunity to study the clinical experience of using competing drugs," Bespalov added. "Such information can be very useful in building a strategy for promoting promising Russian vaccines."

Russia is eyeing China as a potential springboard for Sputnik V into the Asian market.

The Russian Direct Investment Fund, which financed the program, has pledged to produce 200 million doses of the vaccine by the end of this year. RDIF head Kirill Dmitriev revealed earlier this month that Russia was in talks with Chinese manufacturers and distributors, with the fund hoping to start production in China as early as November.

"Mass production in China and other countries could start in partnership with local partners," he told the Chinese newspaper Global Times. "China has the ability to produce the vaccine and supply it -- not only locally, but also by exporting it to other countries in Asia."

Russia's cooperation with China is not a purely business decision, however.

Alexander Gabuev, a senior fellow at the Carnegie Moscow Center, said that geopolitical tensions with the West have pushed the two governments to work together rather than compete in the global vaccine market.

"There is an understanding [by Moscow and Beijing] that many Western countries will say that the Russian and Chinese vaccines are untrustworthy or not good enough, and that under these circumstances, they need to play as one team," he said.

Sputnik V has come under heavy criticism, with many scientists -- including some within Russia -- expressing concern about Moscow registering it before conducting Phase 3 trials.

The U.S. has been at the forefront of international skepticism of both Russian and Chinese candidates. Earlier this summer, Anthony Fauci, the top U.S. infectious diseases expert, openly questioned the two countries' moves to promote their vaccines before fully testing them.

During a radio interview last week, U.S. Secretary of State Mike Pompeo declared that Washington's mantra toward the Chinese and Russian vaccines is "distrust but verify," and accused the rivals of hurrying their vaccines to the market in hopes of making "a political, diplomatic breakthrough." 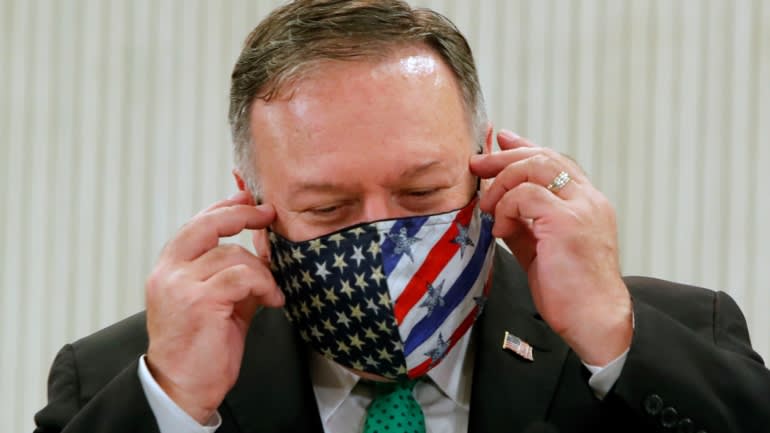 U.S. Secretary of State Mike Pompeo has accused Russia and China of rushing their vaccines to achieve a "political, diplomatic breakthrough."   © Reuters

The U.S. has its own plans for developing a vaccine. In May, the Trump administration launched "Operation Warp Speed," an ambitious program aimed at delivering 300 million doses of a safe, effective COVID-19 vaccine by January 2021. Under Warp Speed, $10 billion has been poured into eight vaccine candidates, including three currently undergoing Phase 3 trials -- developed by AstraZeneca, Moderna, and Pfizer.

A WHO official on Tuesday praised AstraZeneca's decision to temporarily pause its global vaccine trials after an unexplained illness. "This is what we want to see with trials," Margaret Harris told reporters, according to Reuters. "Safety is always critical."

Yet some epidemiologists warn that Warp Speed may be relying too heavily on cutting-edge but unproven technologies.

Michael Kinch, director of the Centers for Research Innovation in Biotechnology and Drug Development at Washington University in St. Louis, said the program's candidates are based on technologies that -- while innovative -- may not necessarily prove effective against COVID-19 since they were originally developed for oncology rather than infectious diseases.

By contrast, he noted, the vaccines supported by China feature a more balanced mix of newer technologies and traditional vaccination methods, such as inactivating the virus.

For now, he likened the difference to financial strategies.