More than 1,900 flights canceled as disruption ripples to Beijing and Shanghai 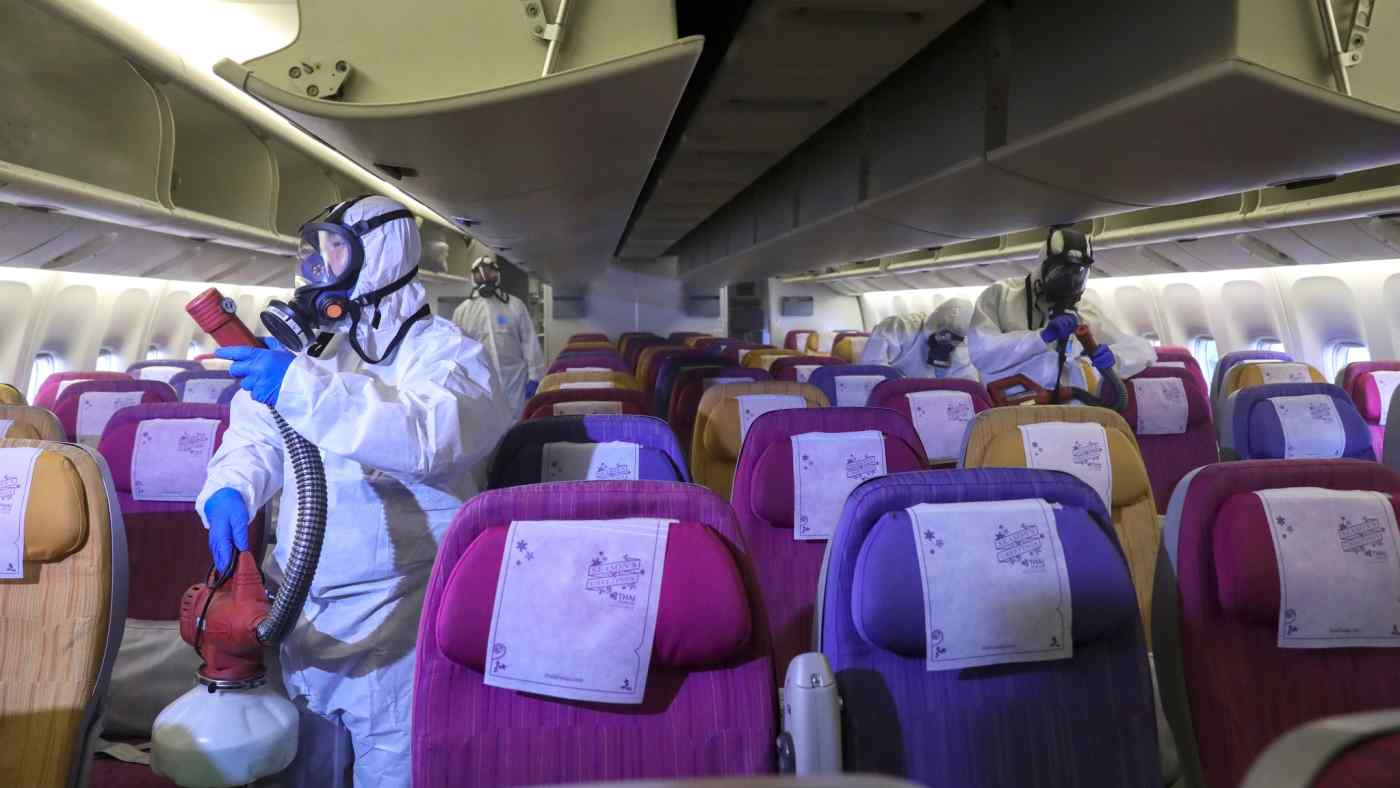 Members of the Thai Airways crew disinfect the cabin of an aircraft in a procedure to prevent the spread of the coronavirus at Bangkok's Suvarnabhumi International Airport.   © Reuters
YUSHO CHO, KAZUHIRO KIDA and MASAYUKI KUBOTA, Nikkei staff writersJanuary 30, 2020 03:19 JST | China
CopyCopied

SHANGHAI/TOKYO -- Nearly 20% of China's domestic flights are being canceled as disruptions from the new coronavirus outbreak spread beyond its epicenter into major transportation hubs like Beijing and Shanghai.

A total of 1,878 and 43 international flights were canceled in China on Tuesday, according to flight tracking website Flightradar24 -- up 760 and 7, respectively, from the day before.

Wuhan, the city of 11 million people where the coronavirus, 2019-nCoV, was first detected, is now in lockdown. But the outbreak's impact is spreading to China's key economic corridors.  With no end in sight to the contagion, disruptions to transit and transportation services are likely to continue past Feb. 3, when the Lunar Year holiday period ends, dealing a further blow to the economy.

Nineteen flights from Beijing to Shanghai were canceled, as were 14 to Shenzhen and another 14 to Guangzhou. A similar number of flights had already been canceled as of 3 p.m. Wednesday.

In an attempt to contain the outbreak, which has killed more than 130 people and sickened about 6,000, China banned group tours at home on Friday and overseas on Monday. But the effect on international travel is only expected to grow.

Germany's flagship carrier Lufthansa said Wednesday that it is suspending services to and from China, excluding Hong Kong, until Feb. 9, following a similar move by British Airways, which has halted all direct flights to the mainland. United Airlines has temporarily halted certain flights connecting the U.S. with major Chinese airports. Many countries, including the U.K., are discouraging citizens from traveling to mainland China to halt the virus' spread.

The Hong Kong government said Tuesday that it will stop accepting individual tourists from the mainland. Flights between Hong Kong and the mainland are expected to be halved.

Travel between mainland China and Japan has been affected minimally, with just six or 2% of flights canceled on Tuesday. All Nippon Airways suspended service to Wuhan, but is operating its 23 round trips to and from 10 other mainland cities as normal, servicing Chinese tourists and families of Japanese workers stationed in China seeking to return home.

The Chinese government extended the Lunar New Year holidays to Sunday. Shanghai and Guangdong Province are requesting businesses to remain closed until Feb. 9, while Hubei Province, where Wuhan is located, is asking the same until Feb. 13.

Foreign companies operating in China are scrambling to deal with the fallout. Toyota Motor will delay resuming operations at its four final assembly plants in China to at least Feb. 10 from the beginning of the month. Honda Motor announced Wednesday that it will wait until at least Feb. 10 to restart its auto factory in Guangzhou. Food and drug manufacturer Meiji will also keep its snack factories in Shanghai and Guangzhou offline until Feb. 10.

"It's hard to tell when the logistics chain will recover, so many players are holding off on new shipments from abroad," said a source at a major logistics provider.

Total travelers in China plunged 76% on the year Tuesday to 13.59 million people, according to China's Transport Ministry.