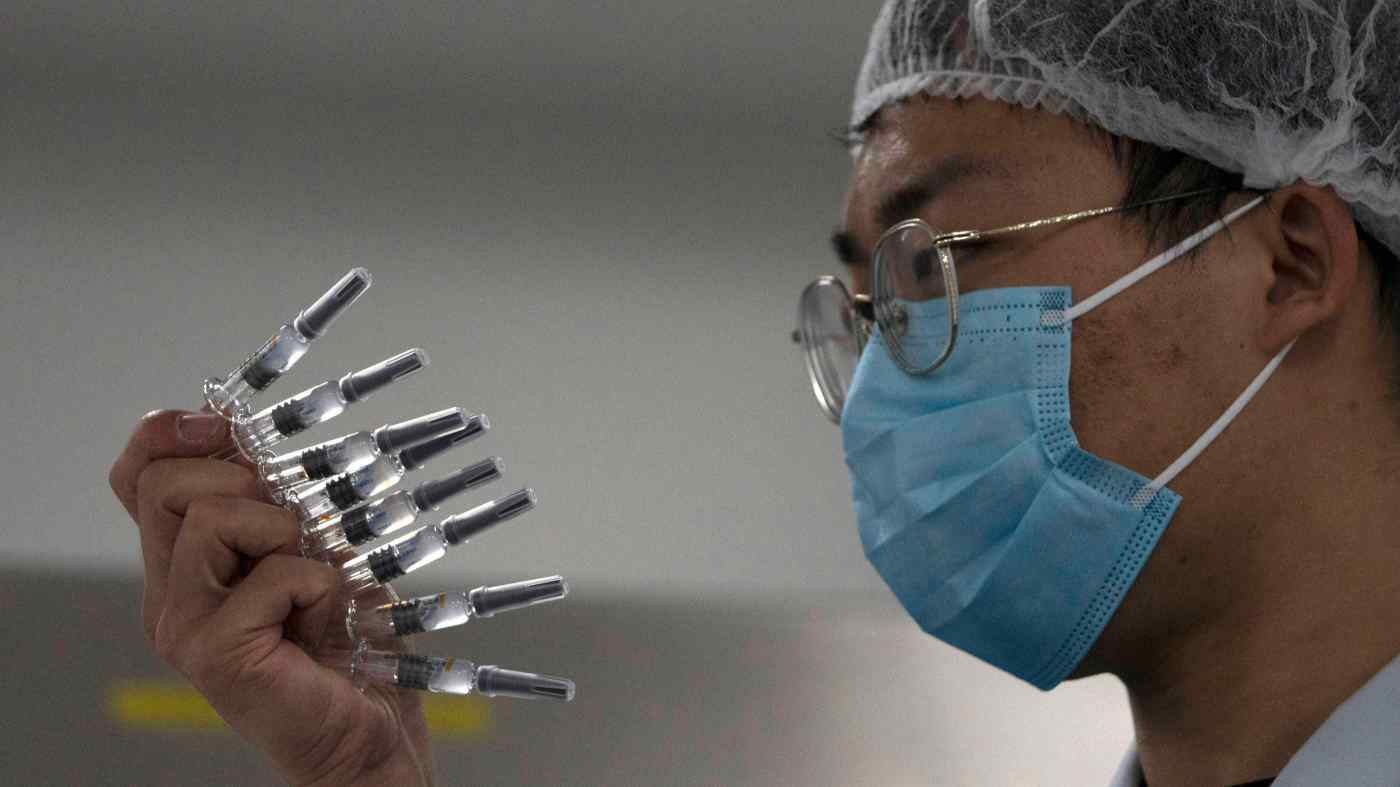 BEIJING -- China is forging ahead with a coronavirus vaccine, inoculating at least 350,000 people despite the fact that the drugs are still undergoing clinical trials.

Shots are being provided on an emergency basis to those who need to travel abroad for work or school. Though recipients have so far reported no significant side effects, concerns about safety remain.

Long lines were seen snaking around the Beijing Institute of Biological Products, a company under the umbrella of the state-run Sinopharm, which is developing and administering the vaccines. Shots are being provided in three-hour windows every morning and night. Records show about 1,000 people receiving the vaccine every day, according to a source at the institute.

"It's the same as a normal shot. I didn't feel anything different," said a 32-year-old employee of a state-owned company who is traveling to West Africa. A woman relocating to Pakistan for work said that while her arm hurt a bit, she has not noticed any other side effects.

The vaccines require two doses per person. Internal Sinopharm documents say shots are likely to provide protection from the disease for one to three years.

The exact price is not clear, but Sinopharm's chairman said previously that a two-shot regimen could cost around 1,000 yuan ($145). The vaccines are said to be free for students studying abroad.

There are several cases of state-owned enterprises shouldering the costs of coronavirus vaccination for employees stationed in countries where China's Belt and Road Initiative is active. Many diplomatic officers and health care workers receive inoculation as well.

On the other hand, host nations do not provide special treatment, such as exemptions from self-quarantine requirements, for people vaccinated with drug candidates still under development. Even so, vaccination has become widespread.

Manufacturing sites are working at a fever pitch. Vaccine developer Sinovac Biotech completed its newest plant between March and July of this year, CEO Yin Weidong said at a media event Thursday. Sinovac has supplied tens of thousands of emergency vaccines to the government, Yin added.

Sinopharm and Sinovac are each in the third phase of clinical testing, and both anticipate government approval at the end of the year.

According to Sinopharm's documents, only a few people developed fevers or headaches in response to the inoculation, from which they have recovered.

Sinovac said only 1% to 3% of test subjects experienced fever as a side effect of vaccination. From 2% to 8% suffered exhaustion, with 10% of subjects reporting pain. Based on those figures, the company says there are no serious problems with its vaccine.

On the other hand, China is one of just a handful of countries that have approved emergency coronavirus vaccinations. Russia and the United Arab Emirates are among the others.

The U.S. is considering emergency vaccinations before clinical trials close. But nine developers, including U.K.-based AstraZeneca and U.S.-based Pfizer, issued a joint statement Sept. 8 that made safety the top priority, indicating concerns over rushed vaccinations.

"There are problems with using a vaccine when its long-term effectiveness and side effects are still uncertain," a medical industry insider said.

A 34-year-old office worker in Dalian, China, said he is "not comfortable" getting the shot for now.

Sinopharm did not immediately respond to a request for comment by phone.

Beijing has pledged to give developing countries priority access to Chinese-developed vaccines. While the emergency inoculations are likely intended to demonstrate the vaccines' safety, using them before trials are complete still carries risks.