JAKARTA/BEIJING -- China is using supplies of its Sinovac Biotech's vaccine to boost its influence in Southeast Asia ahead of U.S. President-elect Joe Biden's inauguration next week.

As part of the vaccine push, Foreign Minister Wang Yi is currently touring the region. He has visited Myanmar, Indonesia and Brunei, and will wrap up his trip in Manila on Saturday.

At a news conference with Indonesian counterpart Retno Marsudi on Wednesday, Wang said China will continue to supply vaccines to the country, stressing that the two nations will overcome COVID-19 and lay the foundation for economic recovery.

President Joko Widodo received the Indonesia's first dose of the Sinovac vaccine at the presidential palace in Jakarta the same day, becoming the first person in the country to be vaccinated.

"Vaccination is important to break the chain of COVID-19 transmission and give protection to us and safety to every Indonesian and help accelerate economic recovery," Jokowi said after getting his injection.

The Indonesian government has so far received 3 million ready-to-use doses of the Sinovac vaccine, and as of Tuesday, 1.2 million doses had been distributed nationwide. Fifteen million does of bulk vaccines also arrived this week.

Indonesia has a deal to receive about 230 million doses of vaccine with Sinovac, Novavax and the World Health Organization's COVAX facility. The government is also in talks to secure 50 million doses each from AstraZeneca and Pfizer.

The Indonesian government estimates it will need about 427 million doses for its 270 million people.

"China wants to show that they are behind ASEAN countries as the vaccination stage of the pandemic approaches," Aaron Jed Rabena, a research fellow at Manila-based think tank Asia Pacific Pathways to Progress, told Nikkei Asia. "So far the countries have been receptive. Projects were pushed through with Myanmar, and President Widodo thanked China for the vaccines." 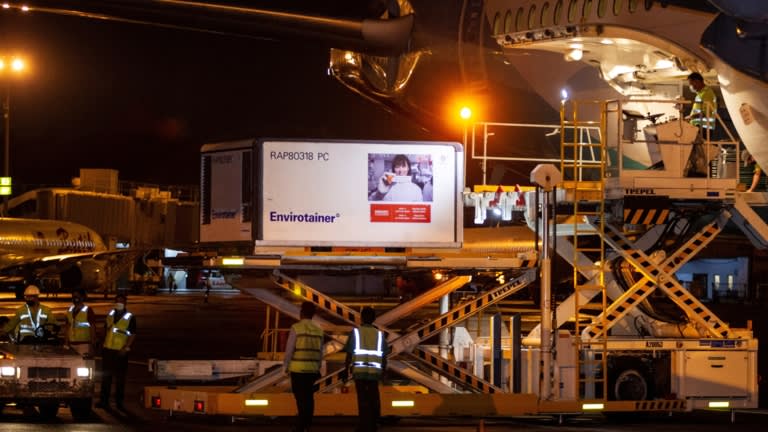 A container with COVID-19 vaccines from China's Sinovac Biotech arrives at Soekarno-Hatta International Airport near Jakarta on Dec. 6.   © Reuters

In Myanmar, Wang promised 300,000 doses of the Sinovac shots. The Chinese vaccine is also drawing attention in countries that Wang is not visiting.

In late December, Singapore became the first Southeast Asian country to begin vaccinating health care workers. Prime Minister Lee Hsien Loong also got a shot on Jan. 8. The Singaporean government plans to secure enough doses of vaccines from Pfizer, Moderna and Sinovac for its 5.7 million population by the end of September.

Thailand plans to start mass vaccinations in February. The Thai government plans to secure 63 million doses of vaccine, which will cover nearly half of its population. The first batch of Sinovac vaccine is due to arrive on Feb. 28.

On Thursday, the Philippines' Food and Drug Administration authorized for emergency use the vaccine developed by Pfizer and BioNTech, the first to be approved in the country

The government in Manila plans to secure about 150 million doses and start administering vaccines made by Sinovac and other companies by the end of February.