BEIJING -- China looks to discourage the usual wave of travelers nationwide visiting family for Lunar New Year festivities, but the restrictions intended to protect against COVID-19 will dampen holiday consumption and hinder the economy's return to healthy growth.

The holiday celebrating the Year of the Ox begins Feb. 12, and the government predicts that people across China will make roughly 1.7 billion trips during the 40-day Spring Festival period.

That figure represents a 15% uptick from 2020, when the city of Wuhan was under lockdown at the beginning of China's battle against the coronavirus. But it remains more than 40% lower than in 2019.

Even as Beijing touts success in tackling COVID-19, new cases are rising in parts of the country, keeping authorities on alert. They also want to rein in any threat before the all-important National People's Congress slated for March.

This is why regional governments are imposing new restrictions. Thirty provinces and directly controlled municipalities are urging office and farm workers to stay put instead of returning to their hometowns, local media report. Some are even requiring travelers between provinces to submit proof of a negative PCR test. 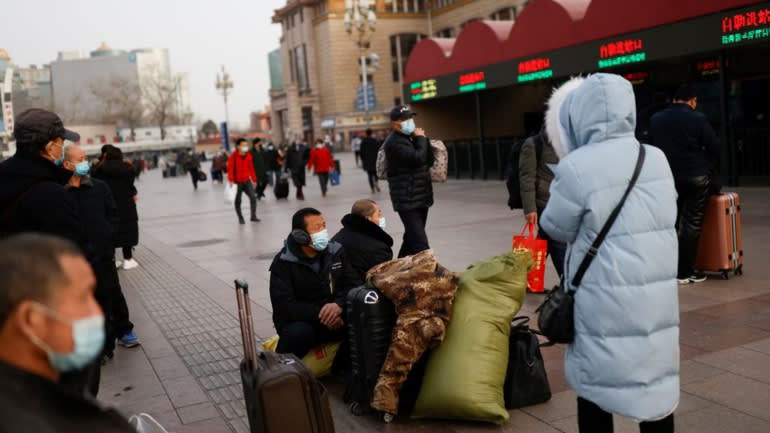 Migrant workers wait at a railway station in Beijing on Jan. 13.   © Reuters

Other localities are offering incentives. In parts of Hefei, factory workers who remain in the eastern Chinese city during Lunar New Year will receive subsidies of 2,000 yuan ($308). Similar programs are planned by cities such as Tianjin, Shanghai and Hangzhou, the central government said.

But these efforts are expected to depress consumption, which accounts for nearly 40% of China's gross domestic product. The reverberations will reach various fields, the National Development and Reform Commission said Wednesday. They particularly will hurt restaurants and the travel industry, which typically generates almost 10% of annual revenue during the Spring Festival period.

Airfare during the Lunar New Year window is averaging about 700 yuan, far below typical levels, according to booking website ly.com. Some air tickets between Beijing and Shanghai sell for even less than high-speed rail.

Local brokerage Haitong Securities initially projected retail sales to climb 39% on the year for January and February, rebounding from negative territory in 2020. But recent travel limitations prompted the company to downgrade its forecast to a 25% increase. The economic blow may be toughest for provinces such as Henan and Anhui, which have higher proportions of migrants.

The efforts to curb travel have some expressing optimism for late February and beyond. As workers stay in urban areas, production can restart quickly after the holiday festivities, a media officer at the development commission said. But this prospect will change if demand loses steam and inventories pile up.

With its economy returning to normal ahead of the rest of the world, China looked toward a sharp recovery this year. Leadership as of December planned to set a real GDP growth target of about 8% for 2021. The Chinese Academy of Social Sciences, a state-backed think tank, forecast year-on-year growth reaching 19% for the first quarter.

Yet the outlook is turning murky with the restrictions on movement. The government may skip setting a growth target at the upcoming National People's Congress as it did last year, a source told the South China Morning Post.

An economist at the academy of social sciences urges against publishing nationwide targets for this year and next, saying economic indicators may swing wildly due to any new coronavirus troubles or a rebound from 2020.