Many foreign residents who fled Guangzhou are being prevented from returning 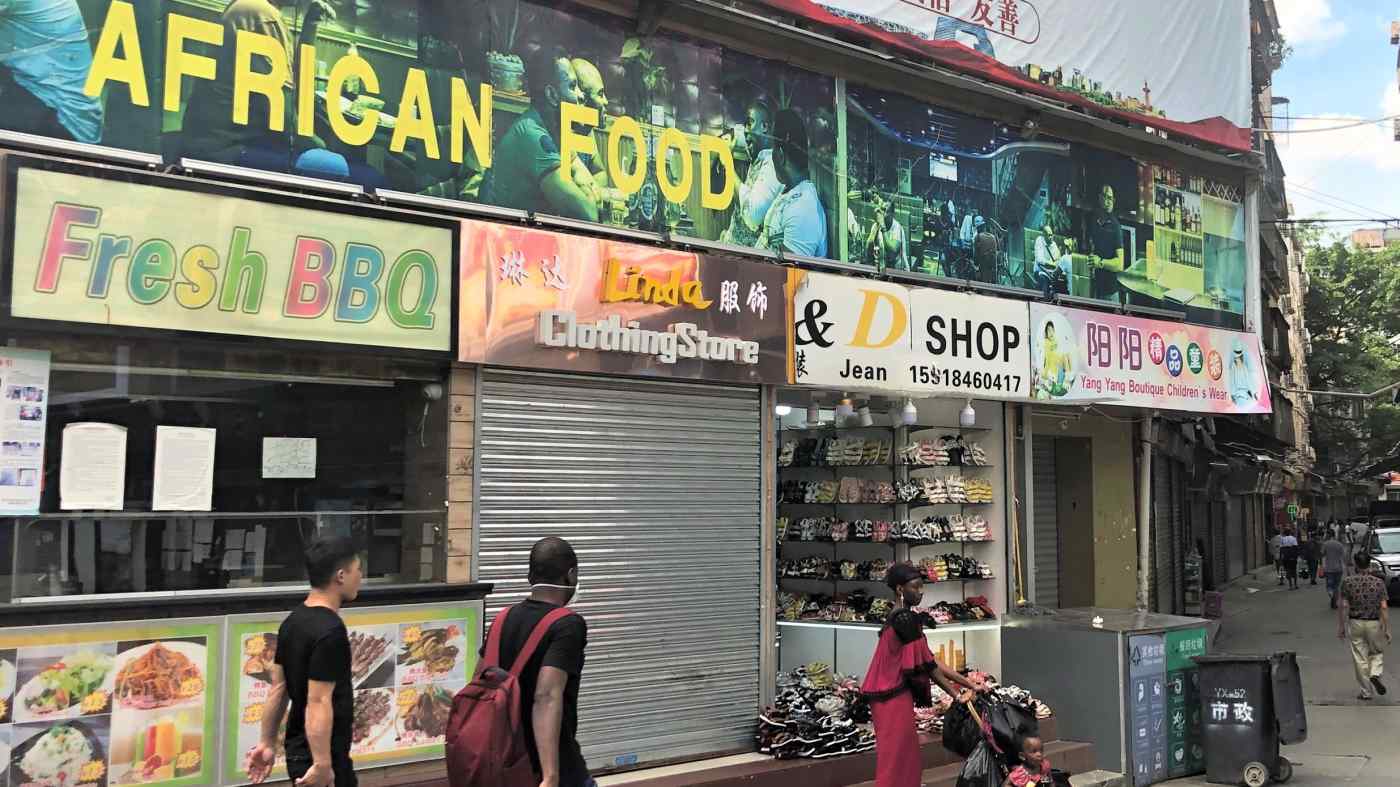 Restaurants that cater to Guangzhou's African residents have closed but appear to be waiting for their customers to come back.
TAKASHI KAWAKAMI, Nikkei staff writerJuly 24, 2020 15:21 JST | China
CopyCopied

GUANGZHOU -- In a district called "Little Africa" here in the capital of Guangdong Province, north of Hong Kong, more than 10,000 Africans reside in what is China's largest African community. Or at least they used to.

These days the enclave appears mostly deserted. About 70% of its residents left months ago to escape what was then an epidemic that one country seemed to be battling on its own.

China ended up successfully dealing with the novel coronavirus, which is now rampaging across many other parts of the globe. But Guangzhou's African residents have been unable to return.

As a result, many of the district's restaurants and retailers remain closed, and there is no telling when the bustle will return.

In mid-July, more than half of the stores on both sides of one street were closed. White rent reminders and pink signs soliciting new tenants were posted at the entrance of each store.

"All stores in the neighborhood were doing business for Africans, but these Africans disappeared after February," said an owner of a clothing shop. "Store owners are all suffering from plunging sales and high rents."

Many restaurants in the neighborhood that sell lamb skewers, fried banana and other African dishes have remained closed since February. "Many foreign residents, including Africans, have been unable to return to China," said a manager of a Pakistani restaurant that was open. Many shops along this street in Guangzhou's "Little Africa" are closed now that so many of their customers are stuck on another continent.

The Little Africa district was created around the turn of the century, after African migrants from Thailand and other Southeast Asian countries fled their adopted nations amid the 1997 Asian currency crisis.

In Southeast Asia, many of the migrants were trading goods when the currency crisis made business difficult, so they vowed to earn their fortunes in Guangzhou, an important trading hub between China and Southeast Asia.

Little Africa generally refers to parts of the city's old square located within a few kilometers of Guangzhou Station. The district has a lot of small shops that export clothing, smartphones and other goods to Africa; restaurants and retailers that cater to Africans were numerous.

According to the Guangzhou municipal government, there were 13,652 African residents in the city at the end of last year, many of whom were presumably living in Little Africa. There seem to be many illegal immigrants as well.

But the situation in Little Africa changed dramatically in February, when the virus's spread posed a serious threat. Like in many other regions, temperature and ID checks at the entrance of districts and buildings became mandatory, and many retailers were forced to suspend operations.

A nearby mosque has also remained closed since February. This mosque, where many Africans who lived in Guangzhou used to pray, has been closed since February.

By April 10, the number of African residents in the city had dropped to 4,553, according to official data from the municipal government.

In mid-April, five Nigerian residents of Little Africa, and employees of a restaurant that was frequented by these Nigerians, tested positive for COVID-19. False rumors then spread online that more than 1,000 Africans had caught the disease.

As a result, many Chinese residents started avoiding Africans when out and about, prompting some restaurants and other stores to post hand-made signs saying, "We are providing non-discriminatory service."

It is said that the municipal government has forcibly quarantined African residents, citing infection controls and testing. In mid-April, a security guard who was checking visitors' temperatures at the entrance of the Little Africa district, said all Africans had been taken to hotels and quarantined.

Some African countries voiced concerns over the treatment of their citizens. Nigeria was among the countries that summoned Chinese envoys to express concern.

China's Ministry of Foreign Affairs was forced to explain. "African friends can count on getting a fair, just, cordial and friendly reception in China," Foreign Ministry Spokesperson Zhao Lijian told reporters on April 12. "The foreign ministry will stay in close communication with the Guangdong authorities and continue responding to the African side's reasonable concerns and legitimate appeals."

The district's African population is unlikely to return to its pre-pandemic level any time soon. To prevent the virus from returning, the Chinese government has tightened visa requirements for foreigners and reduced the number of international flights.

Many Africans must have planned to return to Guangzhou after seeking temporary refuge in their home countries. But the Chinese government is fretting over a potential "second wave" of infections coming from overseas. It is unclear when people will be able to freely travel back and forth between China and Africa again.

Many of the African restaurants in the district that have closed have not cleared their premises, as if they are biding their time until they can reopen. But a security guard working nearby doesn't sound hopeful. "Who knows," he said, "when they will reopen?"