Beijing's coronavirus messaging casts doubt on motivations behind its aid 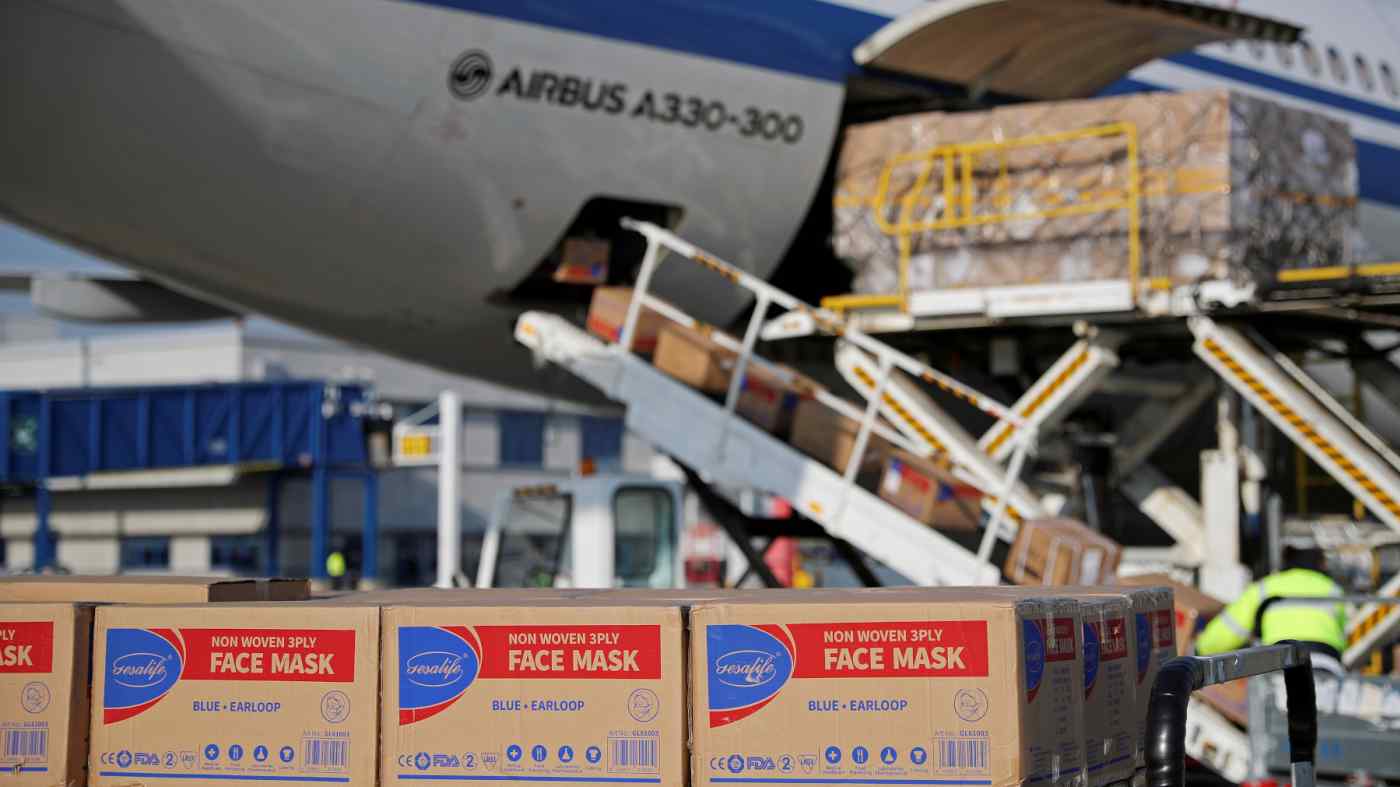 OLOMOUC, Czech Republic -- In early March, Czech Prime Minister Andrej Babis was furious with China's ambassador in Prague and demanding that Beijing replace the envoy. A few weeks on, Babis and Interior Minister Jan Hamacek were full of praise for the Chinese Embassy and Ambassador Zhang Jianmin.

The difference was that, last Saturday, China flew in a first batch of 1.1 million face masks and respirators to help the Czech authorities manage the new coronavirus outbreak. "A big thank you to China for helping," Hamacek tweeted last week, after the shipment was secured.

The badly needed supplies seemed to make the Czechs forgive -- or at least put aside -- Ambassador Zhang's reported threat to punish Czech businesses active in China if another senior politician visited Taiwan.

It is a similar story across Europe: As infection rates decrease within China and rise in the pandemic's new epicenter, the Chinese government and even big tech companies like Huawei are reaching out with aid. But signs that this soft-power push would lead to diplomatic gains are giving way to indications of a brewing backlash.

Beijing "will try to use the opportunity and present itself as a useful partner by providing medical equipment and expertise," said Richard Q. Turcsanyi, a program director at the Central European Institute of Asian Studies at Palacky University Olomouc, in the Czech Republic. Indeed, China has also sent doctors, ventilators and masks to countries including Italy, Spain, France, Serbia and elsewhere. 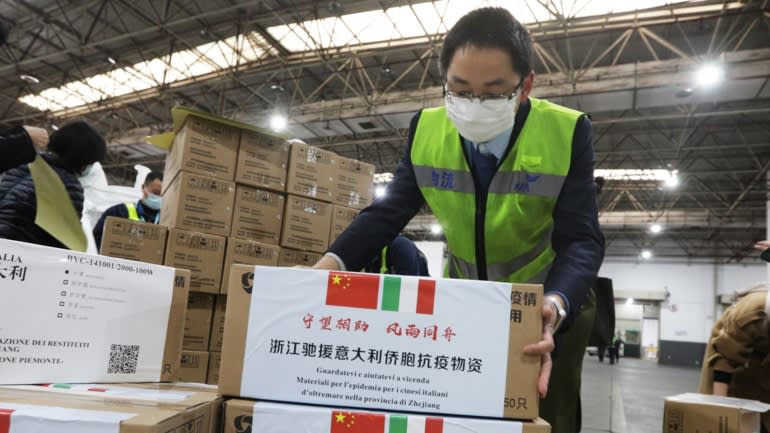 Medical supplies bound for Italy are sorted in a logistics center at the international airport in Hangzhou, China.   © Reuters

To be sure, the Czech government is not the only one that has struck an appreciative tone.

Serbian President Aleksandar Vucic, whose country does not belong to the European Union, raised eyebrows last week when he called European solidarity a "fairy tale" and said the Chinese are the "only ones who can help." Italian Foreign Minister Luigi Di Maio said around the same time that "we will remember those who were close to us in this difficult period," referring to China.

Countries that feel they cannot rely on support from their EU neighbors -- let alone the U.S., which took ambassadors by surprise when President Donald Trump banned visitors from Europe on March 13 -- may be more receptive to the idea of China as a savior.

This may appeal to "Euroskeptic publics" in the short term, at least, according to Lucrezia Poggetti, an analyst at the Mercator Institute for China Studies in Berlin. "But in the long-term," Poggetti said, "it'll be more difficult for the Chinese government to hide and even openly blame others for the outbreak of this global health emergency."

While Poggetti thinks China's "mask diplomacy," as she put it, could score some "short-term 'soft power wins," she said China's "external propaganda can also backfire if pushed too far, as is already happening."

Clearly, China's messaging is starting to rub some European officials the wrong way.

Chinese Foreign Ministry spokesman Zhao Lijian has become a purveyor of conspiracy theories, alleging the coronavirus was designed by the U.S. military to infect Chinese citizens. The Twitter account of the Chinese Embassy in Paris has peddled the same myths.

On Sunday, Swedish Defense Minister Peter Hultqvist warned publicly that Chinese and Russian media were engaged in a disinformation campaign to tarnish his own country's handling of the crisis. China had reportedly blasted Stockholm's response as a "capitulation" to the virus.

Josep Borrell, the EU's chief diplomat, on Monday rebuked the "global battle of narratives" over the pandemic.

There is now "a geopolitical component, including a struggle for influence through spinning and the 'politics of generosity,'" Borrell said. "Armed with facts, we need to defend Europe against its detractors."

European governments are likely reluctant to push back too hard. After all, China is a major producer of medical equipment, including half the world's supply of N95 respirators. But experts say China's version of the coronavirus story is unlikely to gain much traction in the region.

Beijing's claim that its one-party system is the best at fighting the epidemic is "not very credible for most Europeans," said Jean-Pierre Cabestan, a political science professor at Hong Kong Baptist University. The European public, he added, is "well-informed" about how Beijing mishandled and tried to cover up the outbreak in Hubei Province until late January, leading to the global pandemic. This normally busy avenue running toward Paris' Palais Garnier opera house is empty as France and other European countries use lockdowns to stop the outbreak.   © Reuters

In Finland, University of Turku researcher Jukka Aukia said the prevailing view there "is that the outbreak originated from China due to mismanagement, cover-up, and poor overall hygiene. It's difficult to say what would have to happen for China to make any PR gains."

Beyond narratives, a larger concern is growing dependence on Beijing. Poggetti senses unease among European governments and a desire "to protect themselves from foreign interference in these times of weakness."

France and Italy had already said they would use more foreign investment screening legislation to protect strategic companies from outside investors, namely from China. The EU was strengthening these rules last year.

China may have already missed a prime opportunity.

Andrew Small, senior transatlantic fellow with the Asia Program at the German Marshall Fund of the United States, reckons China would have greatly improved its image if it had avoided politicizing the provision of medical supplies to Europe. But now there is a perception -- right or wrong -- that Chinese officials and businesses are using the crisis to gain leverage.

A case in point is Huawei's reported donation of 800,000 face masks to the Netherlands last week. Analysts have questioned whether this was motivated by altruism or by the 5G telecom auction scheduled to take place in Amsterdam in June. Dutch authorities have yet to decide whether to side with the U.S. and other European states in banning Huawei from developing 5G infrastructure over espionage concerns.

Others wonder what motivated Jack Ma, the founder and former executive chairman of e-commerce giant Alibaba Group Holding, to come to the rescue of Ukraine. Last week, Ukrainian President Volodymyr Zelenskiy said Ma "helped us by financing the $80 million" cost for medical supplies imported from China.

"The narratives around this are changing very rapidly," Small said. "We've clearly moved from a sense that it might be possible to 'put geopolitics aside' to a perception among European elites that an information battle is underway -- at the same time as the economic one and, most importantly, in dealing the virus itself."