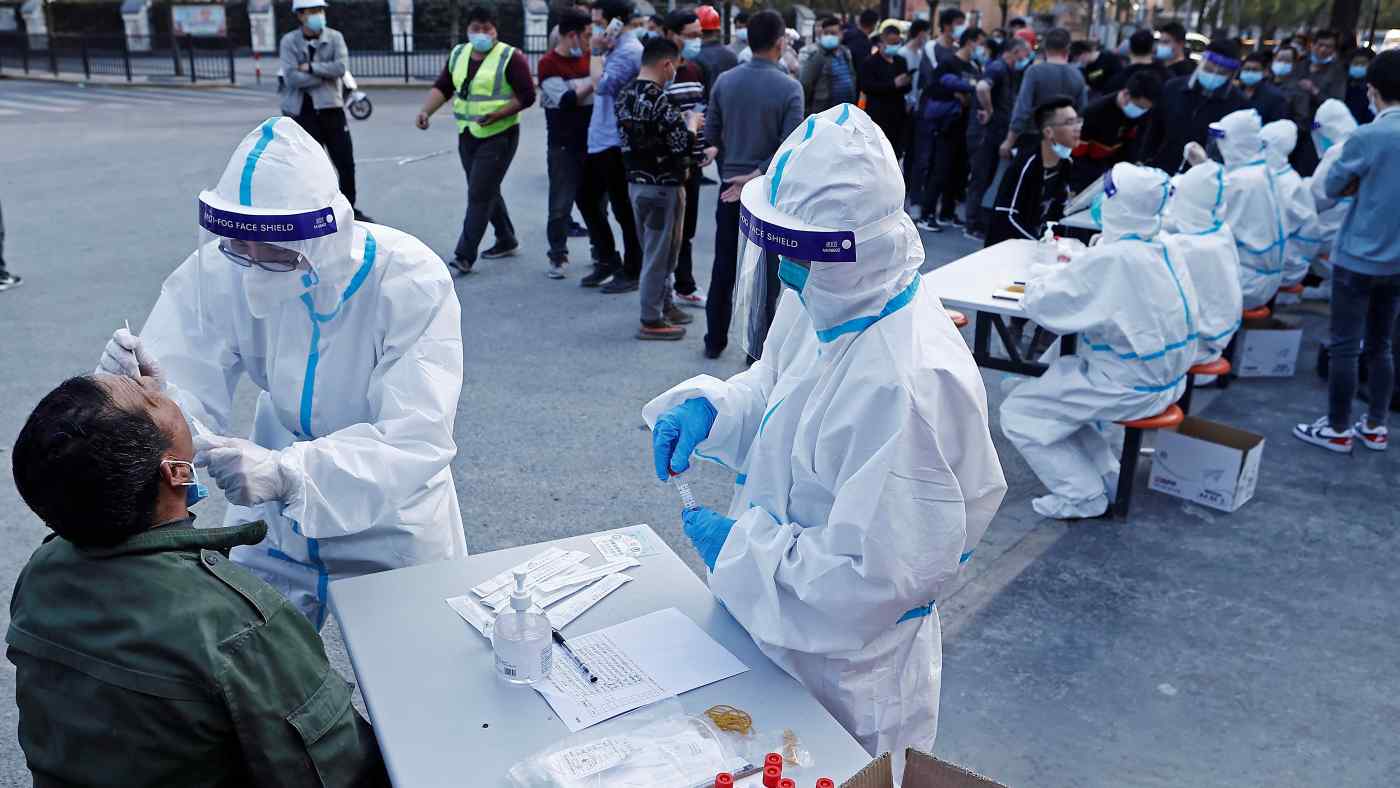 TAIPEI -- Apple suppliers including Foxconn have been forced to suspend production after China partially locked down the cities of Shenzhen and Shanghai to combat a jump in COVID-19 cases.

The Shenzhen government on Sunday night said public transportation in the city will be halted and all nonessential businesses ordered to suspend operations from Monday through March 20.

It instructed all industrial parks and residential areas in Shenzhen to adopt lockdown measures, and said it will start conducting PCR tests on everyone in the city, which has over 17 million residents.

Only businesses essential for daily life, such as markets, pharmacies and medical institutions, are allowed to keep operating as usual, while restaurants can only take orders for delivery. People should not leave the city unless it is necessary, the local government said. Deliveries to and from Hong Kong, however, will continue.

Shenzhen is home to major tech companies such as Huawei, Oppo and TCL, and is also one of the biggest manufacturing hubs for Taiwan's Foxconn, supplying clients from Apple to Google to Amazon. The semi-lockdown comes as the global supply chain is still struggling with an ongoing chip shortage, as well as disruptions from the war in Ukraine.

Foxconn, the world's biggest contract electronics manufacturer, said in a statement on Monday that it would suspend production at its Longhua and Guanlan factories in Shenzhen until further notice from the local government. It has activated plans to use facilities in other cities to support production.

Shenzhen is Foxconn's second-largest manufacturing hub in China, after Zhengzhou in Henan Province, which is the world's biggest iPhone production center. Much early engineering prototyping and research and development work is conducted at the campuses in Shenzhen.

Foxconn's touch panel subsidiary, General Interface Solution (GIS) Holding, said in a stock market filing that its Shenzhen facility will halt production starting Monday as well. GIS, which counts Apple and Samsung as clients, is also allocating some production to other facilities.

Taiwan's biggest printed circuit board maker, Unimicron, a key supplier to Apple, Intel and Nvidia, said its subsidiary in Shenzhen was stopping production from Monday. The subsidiary accounted for less than 3% of the company's revenue, it said.

Unimicron told Nikkei Asia that one of its key products, ajinomoto build-film (ABF) substrate, is not manufactured at its Shenzhen facility, so the production suspension will not worsen the severe global shortage of ABF substrates.

Elsewhere, the Shanghai city government on Saturday urged residents not to leave unless absolutely necessary, while anyone traveling in or out of the city must present a PCR test result from within the last 48 hours. Bus service between Shanghai and other provinces, such as Anhui, Shandong and Jiangxi, will be suspended, starting Monday, according to the city government. Shanghai is the country's most important semiconductor manufacturing center, as well as its financial hub.

GEM Services, a Taiwanese power-management chip packaging and testing company, said in a stock market filing that its Shanghai plant is suspending production from Sunday to Tuesday in compliance with the local government's request to take COVID prevention measures.

China on Sunday reported more than 1,800 locally transmitted coronavirus cases across the country, including more than 1,400 in Jilin, one of the country's biggest industrial cities. There were 60 cases in Shenzhen and 64 in Shanghai, while Hong Kong continued to report more than 30,000 daily cases.

China has adopted some of the world's strictest measures for battling coronavirus since the pandemic began in 2020. The renewed restrictions in Shanghai and Shenzhen follow on the heels of the National People's Congress, where the country's leaders set a growth target of around 5.5% for this year, one of the lowest growth targets in decades. China also concluded the Beijing Winter Paralympics on Sunday night.