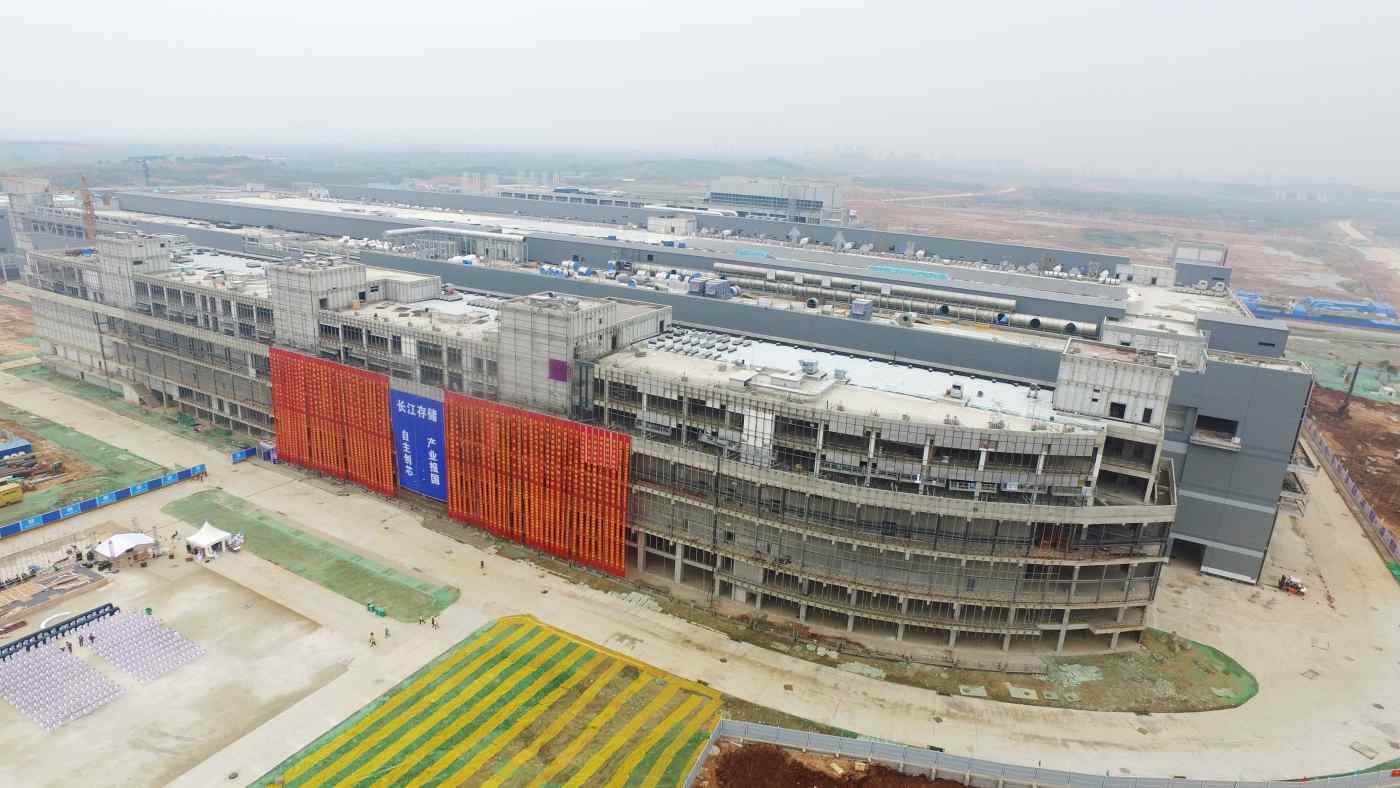 TAIPEI -- Yangtze Memory Technologies, China's top memory chipmaker, has announced it is now able to build chips that match the most advanced offerings of international industry leaders, though it remains to be seen if this breakthrough will translate to successful mass production.

On Monday, the Chinese national champion said its 128-layer 3D NAND flash memory chip samples have been verified by the company's partners and the first batch of the chips will go into production as early as the end of this year. International players such as Samsung, Kioxia (formerly Toshiba Memory), Micron and SK Hynix are also poised to start mass-producing such chips this year.

Yangtze Memory, an affiliate of Beijing-backed tech conglomerate Tsinghua Unigroup, is China's first homegrown memory chipmaker. It has been racing to catch up with international rivals and help Beijing realize its goal of creating a full-fledged domestic semiconductor industry.

Currently, the likes of Samsung and Kioxia are all producing 96-layer 3D NAND flash memory chips, while Yangtze Memory only began churning out a 64-layer version in the second half of 2019. Memory chips with more layers are more difficult to develop and produce, but are also more cost-efficient, as more can be fit onto a single chip wafer.

"As a new entrant in the flash memory industry, Yangtze Memory is bringing 3D NAND to new heights," said Grace Gong, Yangtze Memory's senior vice president of marketing and sales. "We are able to achieve these results today because of the incredible synergy created through seamless collaboration with our global industry partners, as well as remarkable contributions from our employees."

If production proceeds as planned, it will help China realize part of its goal to become self-reliant in crucial memory chips. NAND flash memory chips in particular, which are controlled by Samsung, Kioxia, SK Hynix, Micron and Intel -- are essential components for almost all electronic devices, from computers, smartphones, data center servers to connected cars. Yangtze Memory is so far the only Chinese company able to produce such chips.

Yangtze Memory's announcement comes as the world continues to battle the deadly coronavirus pandemic that has killed more 100,000 people worldwide and caused severe market disruptions. But even though the company is based in Wuhan, the initial epicenter of the coronavirus outbreak, it has managed to stay open throughout the lockdown thanks to special approvals from both local and central governments, as Nikkei Asian Review first reported.

Formally founded in 2016, Yangtze Memory -- which has around 6,000 employees and still actively recruits new blood -- has always been careful to avoid becoming caught in the crossfire of the Washington-Beijing tech battle. It unveiled its own Xtacking technology -- a fundamental structure for it to build 3D NAND flash memory -- at the annual Flash Memory Summit, the most prominent industry event at Silicon Valley, back in August 2018. Company CEO Simon Yang, an industry veteran, said at an industry forum that same year that his company is not a "copycat" but an innovator in technologies and reassured other players that it did not intend to cause a price crash in the market, Nikkei earlier reported.

Yang said in an official WeChat blog post on April 10 that Yangtze Memory has resumed all production and has successfully brought all employees back to work. "The new core challenges now are to catch up all the progress and still try to reach the company's previous target this year," he said.

Many top NAND flash controller chip developers as well as chip packaging and testing providers from around the world work with Yangtze Memory, such as Phison Electronics, Silicon Motion, Lite-On Technology, and Amkor. These top-tier suppliers also work with the likes of Samsung and Micron, and their willingness to do business with the Chinese company is a testament to the quality of the latter's products.

Avril Wu, an analyst at research company TrendForce who tracks the memory chip industry closely, told Nikkei that Yangtze Memory will still need to overcome some technical hurdles to smoothly mass produce the new chip, "but it's so far the most promising player in China's hope to build a viable semiconductor industry and reduce its dependence on foreign chipmakers."

"If all the things are on track, we expect Yangtze Memory could start to pose some pressure on existing market players from the end of next year, 2021," Wu said.