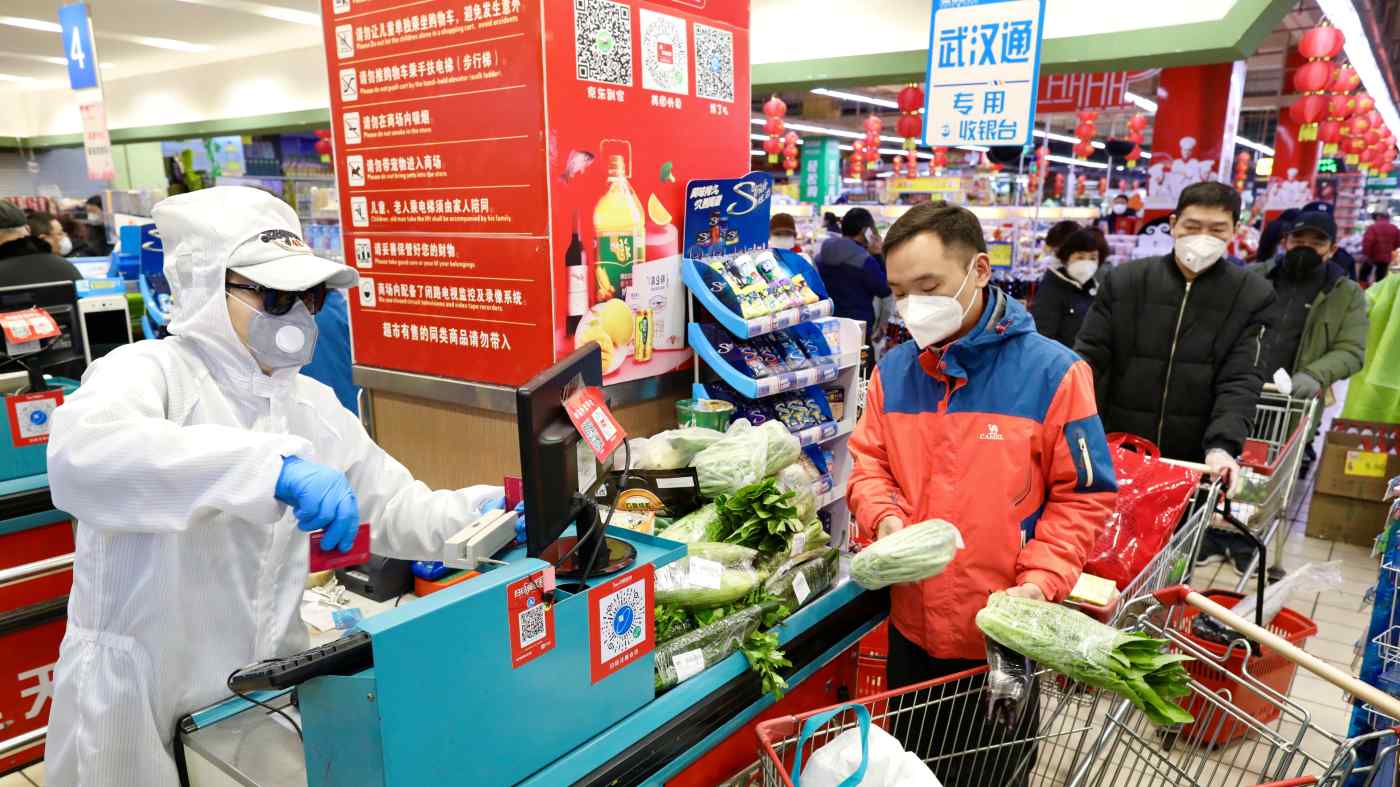 The first Chinese company to issue an epidemic prevention and control bond says it will use the proceeds to "stock up on vegetables, meat and proteins and other livelihood necessities for sales."   © Reuters
KENJI KAWASE, Nikkei Asian Review chief business correspondentFebruary 14, 2020 15:09 JST | China
CopyCopied

TOKYO -- Chinese companies are flocking to newly sanctioned "virus bonds," whose purpose is ostensibly to bankroll expenditures related to the coronavirus outbreak and cover emergency financing needs. But just a week after the first issuance, it is becoming clear that companies are using the new funding instrument primarily to roll over old debts -- another sign that deleveraging in China has taken a back seat to spurring growth.

Officially known as "epidemic prevention and control bonds," the funding instrument was part of a lengthy financial policy package unveiled on Jan. 31 by five central government institutions, including the People's Bank of China, the Finance Ministry, and securities and banking regulators. The authorities pledged to establish a "green channel" that would fast-track any bond issuances related to the virus.

After news outlet Xinhua, the Communist Party mouthpiece, reported on Feb. 5 that the National Association of Financial Market Institutional Investors, which handles fixed-income trading, was prepared to accept new issuances, the floodgate was opened. As of Thursday, over 25 bonds were either being issued or had been announced by at least 20 companies on the official website of the Shanghai Clearing House. Most of the bonds have a tenor of less than a year, with the shortest being 60 days, while the longest ones are three years, according to the individual prospectuses.

The first issuance on Feb. 7 by Wumei Technology Group hews closely to the original policy objectives. The Beijing-based retailer issued a 300 million yuan ($43.1 million) short-term note with a tenor of 231 days, pledging the proceeds to be "fully used to replenish part of its cash holdings to ensure livelihood supplies in order to resist novel coronavirus epidemic," in its prospectus. More specifically, the supermarket chain operator vowed to use the money to "stock up on vegetables, meat and proteins and other livelihood necessities for sales" to maintain the flow of goods to consumers.

Midsize airlines soon followed suit. Shenzhen Airlines, a subsidiary of Air China, has so far issued three separate bonds under the new framework, with a total sum of 1.8 billion yuan, all of them maturing in around 180 days. Xiamen Airlines, a Fujian-based unit of China Southern Airlines, also issued three bonds with tenors between 163 day and 268 days for 1.3 billion yuan in total. Alicia Garcia Herrero, Hong Kong-based chief economists at Natixis, pointed out on a report on Monday that airlines are "among hardest hit by coronavirus outbreak," given the tougher global travel restrictions, especially for carriers more dependent on passenger traffic rather than cargo. Herrero said the impact "should be worse than during SARS as the Chinese economy is now on a decelerating trend."

However, both airlines are spending less than half of their respective proceeds on epidemic-related expenses, such as covering costs for ticket refunds and transporting emergency items. The rest was used to repay existing debts -- 1.4 billion yuan, or 78% of the total, in Shenzhen's case, and 800 million yuan, or over 60%, in Xiamen's, as revealed in their prospectuses.

Other issuers have tended to follow a similar pattern. State-owned Hunan Grain Group said it will continue to send supplies for the People's Liberation Army operating on the ground, including building hospitals, but that only accounts for 20% of the 100 million yuan that it raised through the 60-day note. The remaining 80% went to meet repayment deadlines for bank borrowings due on Feb. 26 and March 10.

Among the 13 companies that released prospectuses on Wednesday and Thursday, over half of the maximum of total 8.85 billion yuan to be raised is going to be used for debt and loan repayment. Only Jiangsu Guoxin Investment Group stated that all of the cash raised will be used for virus-related purposes.

Although the joint policy statement that enabled the fixed-income tool does not necessarily prohibit the use of proceeds to roll over debts and loans, the main purpose of the new fund-raising channel was supposed to be for the "prevention and control of epidemic" -- hence its name.

The fact that companies are using the bond to manage their debt loads is another sign that Beijing has given up on -- or at the least put aside -- its deleveraging effort to prioritize stimulating the economy.

There is a strong political imperative to focus on growth: President Xi Jinping pledged to double GDP by 2020 compared to 2010 as part of the Communist Party's long-term goal of achieving a "well-off society." With time running out, the pressure is on to meet that target, even at the expense of financial discipline.

"Debt deleveraging has been a buzzword for the last three to five years. But it's never meaningful," Kevin Lai, chief economist at Daiwa Capital Markets in Hong Kong told the Nikkei Asian Review. The debt-to-GDP ratio has been rising during this period, and Lai believes that with the outbreak of the virus, it will continue to do so. "The government will have to offer more stimulus support and allow debt to rise."