China scores points over Russia with 'mask diplomacy' in Belarus MOSCOW -- China's coronavirus aid has earned mixed reviews in Europe at best, but it appears to be working as advertised in Belarus -- apparently at Russia's expense.

Over the past month, China has sent three cargo planes to the small Eastern European nation, carrying over 82 tons of rapid testing kits, masks, protective suits, respirators and other medical equipment. Another shipment is due to arrive later this month.

Belarusian President Alexander Lukashenko sent a telegram to Chinese leader Xi Jinping earlier this month thanking him for the assistance and inviting him to visit this summer. "Our joint efforts to overcome temporary difficulties have once again confirmed the strong friendship and the special nature of the Belarusian-Chinese partnership, [and] have filled relations between the two countries with special trust and solidarity," Lukashenko wrote.

The neighbors' widening rift and the deepening Minsk-Beijing ties make for an awkward and delicate diplomatic triangle on the fringes of Europe.

Belarus has turned to China not only for medical supplies but also financial assistance as the pandemic induces a global economic downturn. Minsk is in talks with the Beijing-led Asian Infrastructure Investment Bank for a $350 million loan to support two state-owned banks, and has reached out to the China Development Bank for funding as well.

This follows Belarus' emergence as one of China's closest Eastern European partners in recent years. The volume of Chinese investment into the Belarusian economy increased by 200 times over the past decade, as Beijing sought to develop the former Soviet republic into a major hub for its Belt and Road Initiative. The Great Stone Industrial Park, a 112-sq.-kilometer business center just outside Minsk, carries the distinction of being China's largest economic project abroad. 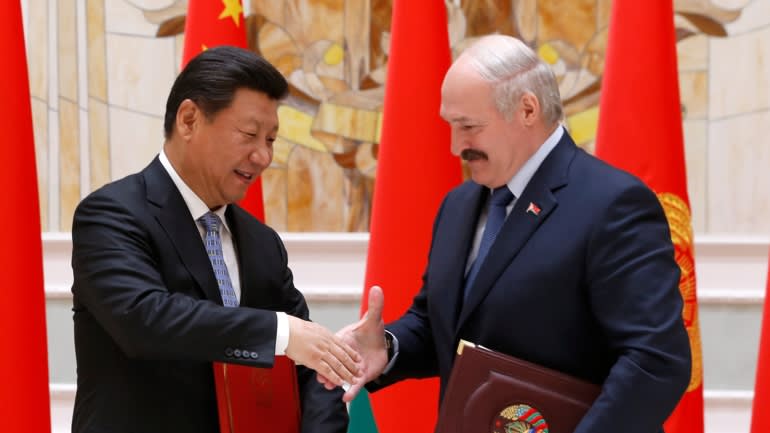 Now, although some coronavirus-hit countries have questioned the intentions behind Beijing's "mask diplomacy" and complained about substandard equipment, Belarus has only tightened its embrace of China -- and pushed Moscow away.

Russia and Belarus signed a treaty to establish a union state two decades ago, but the project has largely remained on paper. Lukashenko, who has ruled his country since 1994, has bristled at pressure from the Kremlin to pursue deeper integration, accusing Moscow of trying to "swallow up" its smaller neighbor.

This year, Minsk and Moscow have sparred over the appropriate response to the coronavirus.

Belarus, despite confirming about 27,000 cases and over 150 deaths, is one of the few countries to avoid the mass quarantines and travel restrictions imposed across Europe and much of the world. Lukashenko has repeatedly mocked concerns about the outbreak as a "psychosis" and declared that Belarusians should protect themselves by drinking vodka and bathing in saunas.

This lax attitude alarmed Russia, which closed their shared border on March 16, provoking a furious response from Lukashenko. He said he had not been consulted and warned, "It is easier to shut down something or to start a war than to find a way out of this situation."

Moscow fired back, stating it had been forced to close the border because Minsk did not take sufficient precautions.

Then, after Russia donated 10,000 test kits to Belarus in early April, Minsk grumbled that many were inaccurate.

On the other hand, in the interview where he lamented Russia's ego, Lukashenko made a point of praising China. "This country helps a lot and behaves in a polite and decent fashion," the president said. "China can help through investments and is helping with millions of dollars."

Arseny Sivitski, director of the Center for Strategic and Foreign Policy Studies in Minsk, said the Belarusian leadership greatly appreciates that China, unlikely Russia, did not criticize their coronavirus response.

Russia, which is struggling to contain its own outbreak, "is trying to seriously push this issue, which Belarus regards as a form of interference in its internal affairs," Sivitski said. "At this same time, China is confirming through practical steps that it regards Belarus as a strategic partner." 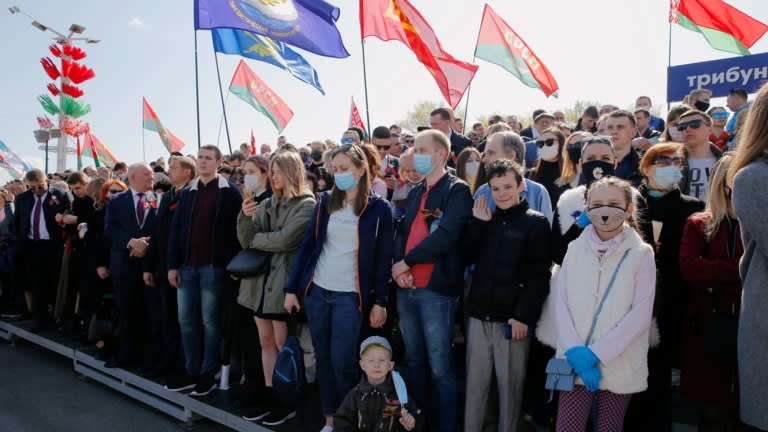 A crowd watches a parade marking the World War II victory over Nazi Germany in Minsk on May 9. Belarus has avoided the coronavirus restrictions imposed in many other countries.   © Reuters

A key question is how this apparent "soft power" win for China might affect Beijing's relations with Moscow.

The Kremlin, so far, has refrained from publicly expressing concern about China's growing influence in Belarus. Dmitry Bolkunets, an expert on Russo-Belarusian relations at the National Research University Higher School of Economics in Moscow, suggested that although Russia increasingly regards China as a competitor there, it remains confident about its own ability to wield influence over the long term.

Moreover, Bolkunets argued, Russia and China are unlikely to squabble over Belarus because they share a common interest in opposing political revolutions in the country. Neither side wants to see Minsk move too far into the West's orbit.

But other experts stress that Belarus is eager to lessen its reliance on Russia by aligning itself closer to China -- an opportunity the coronavirus pandemic provides.

"Belarus wants to cooperate with China because there are no direct threats or political games with them," said Siarhei Bohdan, an analyst at the Minsk-based Ostrogorski Centre.

"With Russia, on the other hand, there always is a downside," he added. "Despite our cultural closeness and extensive experience of cooperation [with Moscow], we have to deal with numerous political side effects and often times incorrect conduct from the Kremlin, who believes that it can ignore its Belarusian ally."