China struggles to return to business after extended break

Foxconn and other tech suppliers strain to restart production

TOKYO -- Hopes that the Chinese economy would return to normal on Monday after an extended Lunar New Year holiday have taken a hit as several companies announced they will remain closed due to concerns over the coronavirus.

Consumer goods makers, leisure facility operators, steelmakers are among those postponing operations, according to filings with the Shanghai, Shenzhen and Hong Kong stock exchanges, as the death toll from the virus topped 900.

The majority of announced delays are from companies operating in Wuhan, the city hardest-hit by the outbreak. Wuhan Hanshang Group, which runs shopping malls, wedding photo shops, and a convention center in the city, shuttered all of its facilities on Jan. 23 and has given no indication of when operations will resume.

The day before the suspension, the Shanghai-listed company announced that its 2019 net profit jumped by about 50% from the year before, based on its preliminary estimate. This year's bottom line, however, will likely take a hit from the prolonged period of closure.

Major food chain Jiumaojiu International Holdings said on Sunday evening that it will extend the suspension of all its restaurants, both self-operated and franchised locations, which have been closed since Jan. 29. The company, which listed in Hong Kong just last month, operates 287 restaurants directly and 41 others as franchises, in four major cities and 15 provinces, including Wuhan, in Hubei Province, according to its prospectus published at year-end.

Meanwhile, China's technology supply chain remains at a near standstill. Key suppliers to Apple are straining to restart production of iPhones, iPads and other devices amid concerns that the coronavirus could spread through factories and the dormitories where thousands of workers live in close quarters.

Some of Apple's key iPhone production sites in China were given approval by local health officials to resume production after they had completed health inspection audits on Sunday night, sources told the Nikkei Asian Review. However, issues have been found in some facilities, including the world's biggest iPhone production site in Zhengzhou,  Henan Province, operated by Foxconn. Facilities where red flags have been raised will be required to have daily public health inspections, the sources said.

Most of the key iPhone assemblers, including Foxconn -- which trades as Hon Hai Precision Industry -- Pegatron and Wistron, are aiming to restart work as soon as Tuesday. But worker shortages remain a significant hurdle.

"Whether we resume work or not is not the point. The point is whether we have enough workers or not," an iPhone supply chain source familiar with the situation told Nikkei. 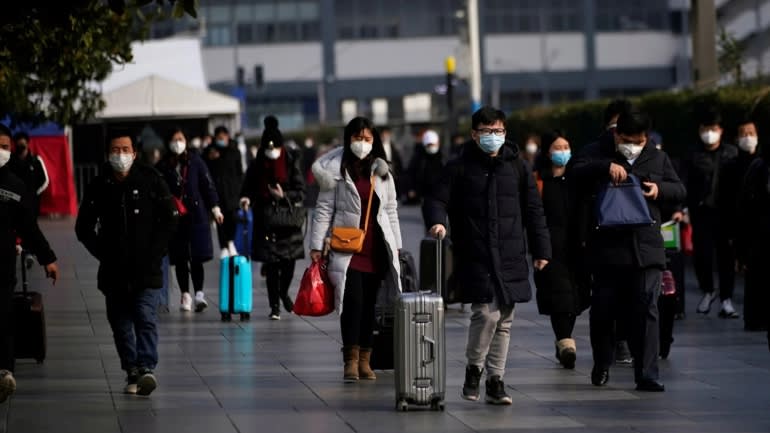 Cautiously heading back: Travelers walk at the Shanghai railway station on Feb.9.   © Reuters

Shangai-listed Cabio Bioengineering (Wuhan), meanwhile, is grappling with the city's paralyzed transportation network. The food ingredient producer says its factory, located in an economic development zone on Wuhan's outskirts, is "unable to resume operation as scheduled" because public transportation suspensions are preventing employees from coming to work. The company also mentioned in its disclosure that "various companies in Hubei Province cannot resume operation before midnight on Feb. 13, based on a recent circular from the authorities."

Travel disruptions are also preventing companies outside of Wuhan from getting back to work as scheduled. China Vanadium Titano-Magnetite Mining announced on Friday that the operations of its Maoling Mine in Sichuan province will remain suspended after the prolonged holidays. The Hong Kong-listed company said that "a significant portion" of site workers who carry out underground operations in the magnetite mine are from Hubei and Zhejiang provinces and "will be unable to return to work."

Hengxing Gold Holding is also delaying the resumption of mining, originally scheduled for Monday. The company said on Friday that it is "uncertain" when its Gold Mountain Mine in Xinjiang will be able to restart, subject to government approval and "the return of the workforce." The Hong Kong-listed miner predicts "less gold production in the first quarter." The mine produced 25,313 ounces, or 787.3 kg, of gold during the fourth quarter and 85,654 oz for all of 2019.

"Chinese brick-and-mortar retailers selling discretionary items, travel-service providers and transportation companies are most exposed to disruptions stemming from the coronavirus outbreak," a team of analysts led by Cedric Lai at Moody's Investor Service said on Friday. "These disruptions include transportation suspensions, travel bans and reduced customer traffic flows," which is affecting wide range of sectors.

New Building Materials is set to resume operations in stages. Its medicine and medical equipment units will "gradually resume" from Monday, the Shenzhen-listed Wanbangde company said, while its aluminum material producing subsidiary is expected to pick up from Wednesday onward.

For the service sector, the worst damage may have already been done, as the outbreak hit during the high-demand Chinese New Year holiday season.

China Film had to close down all 141 of its movie theaters across the country during the break, while its Shanghai-listed peers Shanghai Film and Hengdian Entertainment were in a similar situation. No figures have been released yet, but China Film's box office sales during the seven-day holiday season last year was 144.03 million yuan ($20.6 million), which made up 8% of its annual ticket sales revenue.

The impact of the outbreak is in hitting less-expected areas, too. China Oriented International Holdings has suspended the operation of its two driving schools. The Hong Kong-listed company says reopening the schools is "strictly prohibited" without the permission of the authorities. The company has not said whether it has received that permission.

Even companies that have managed to resume operations are warning of potential difficulties to come. Hunan Valin Iron & Steel Group says production is "stable" for the time being, but added that if work at construction sites is further delayed, it will "consider decreasing production."

Semiconductor Manufacturing International Corp., a major Chinese chip foundry, is "working hard to maintain the uninterrupted state of manufacturing operations" according to its disclosure to the Hong Kong Exchange on Friday. The strategically important tech company is standing firm, but Chairman Zhou Zixue, acknowledged in the statement: "The current prevention and control of the novel coronavirus is serious and the task is arduous."

SMIC's statement comes as Foxconn is taking extraordinary steps to restart production -- even going so far as to begin manufacturing its own surgical masks for employees.

Another complication for Foxconn and other tech suppliers has been conflicting messages from local and central governments in China, leading to questions about when they can -- or should -- restart production.

"The current status is that both manufacturers and governments do hope people could come back to work and manufacturing, as those are crucial to steady economic performance. But none of the parties want to be too aggressive, as no one could shoulder that kind of risk and responsibility," one of the sources familiar with the matter said. "All the suppliers are in many different areas of China, and all the local governments have different regulations."

Among Japanese companies, tiremaker Bridgestone was expected to restart factories Monday in Wuxi, Tianjin and other cities, but the reopening has been delayed due to the difficulty in securing enough workers. Operations now are expected to resume within a week.

Mazda Motor and Isuzu Motors have postponed resumption of Chinese factories as well. Toyota Motor intends to restart operations at Chinese plants no sooner than Feb. 17.

"There will be no work until the 17th," said a senior manager at a Guangzhou supplier for Toyota's plants. "We have no choice but to sit at home."

An auto parts maker in Guangzhou restarted production lines Monday, but "personnel was about 60% of the normal level," an employee said.